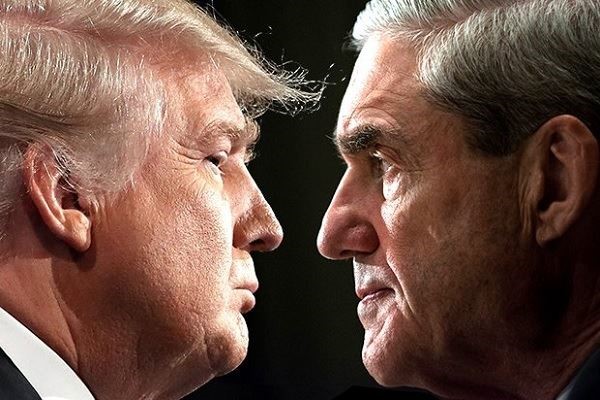 Over the last sixteen months, the Mueller investigation into Russian interference in the 2016 elections has, arguably, become the biggest talking point of the Trump administration. It may well be that an ever-increasing budget deficit, a direct result of Trump’s tax reforms, will become the long-term legacy of Trump’s presidency. There is also the distinct possibility that the racial issues that have engulfed the nation will define the Trump presidency. Alternatively, perhaps Trump’s ineffective foreign policy will be the stand-out characteristic of his time in the White House. At this moment in time, this is just conjecture, and history will be the judge. For now, however, special counsel Robert Mueller, a former Director of the FBI, and his investigation into both Russian interference and the subsequent obstruction of justice, dominates US political discourse.

Mueller’s investigation has proved extremely damaging to the Trump presidency, especially among moderate Republicans and some members of Congress. Since 12 May 2017, when Assistant Attorney General Rod Rosenstein appointed Mueller, the investigation has developed into a public relations disaster that has resulted in criminal charges brought against associates of Trump. Not only has the enquiry looked at Russian interference in the 2016 elections, but it has also spawned further investigations into possible obstruction of justice by members of Trump’s election campaign staff and White House officials. Former Trump campaign manager, Paul Manafort, and Trump campaign advisor, George Papadopoulos, were both charged with conspiracy against the United States during Trump’s Presidential campaign. Trump’s short-lived National Security Advisor, Michael Flynn, pleaded guilty to lying to the FBI about the discussions he had with the Russian government prior to Trump taking office.

Recent analysis by poll analysts FiveThirtyEight.com has identified that the investigation has become a politically divisive matter. Republicans, on the whole, agree with Trump’s assessment that the investigation is a Democratic Party-led witch hunt. Such thoughts go against the facts – Mueller is a self-confirmed Republican who served both Republican George W. Bush and Democrat Barack Obama as Director of FBI. Fervent Democrats, on the other hand, anticipate Watergate-like revelations from the investigation in the hope that it will lead to Trump’s impeachment. This, again, is several steps from reality. Firstly, there is no proof (yet) that Trump is involved in the Russian interference or participating in a cover-up. Secondly, the prospects of the Republican-dominated Congress impeaching Trump are slim. This, of course, may change is Mueller’s probe does unearth any collusion between the President and Russia. According to recent polls, 55% of Americans believe that the investigation should still go ahead, despite such partisan divisions. 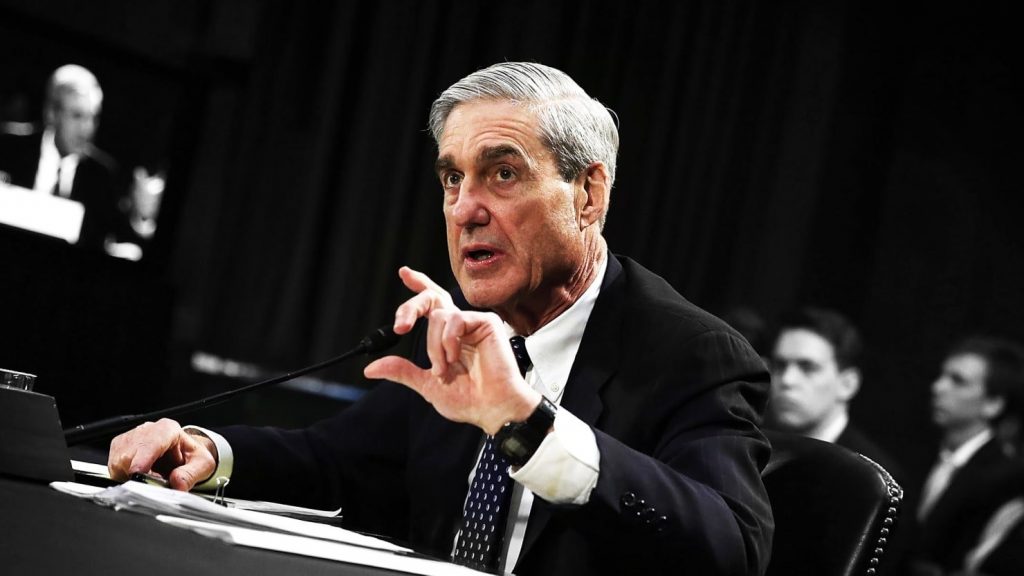 The public support for the Mueller investigation, combined with a job disapproval rating of 54% has increased the pressure on Trump. Recently, there have been suggestions that Mueller could subpoena Trump to testify as part of Mueller’s investigation into the obstruction of justice connected to the Russia enquiry. Issuing subpoenas to the President has not been a regular occurrence. Both Jefferson and Nixon received subpoenas to produce material evidence and both refused. If Mueller does subpoena Trump for testimony, then he would join Bill Clinton on a very select list. Trump’s lawyer, Rudy Giuliani, has squashed speculation that Trump would testify to Mueller, however. Giuliani has called for Mueller to present any evidence of Trump’s complicity in advance of any interview and prove that Trump’s testimony is essential to the investigation. In addition, Giuliani has stated that Trump’s executive branch will waive executive privilege on information if Mueller agrees to three conditions – firstly, that the White House reviews the Mueller report on obstruction of justice; secondly, that the Trump administration needs to agree that the report is fair; and finally, if it has a chance to release a rebuttal report.

The news that Manafort is prepared to work with Mueller should instigate a damage-limitation exercise by the Trump White House. Trump and his advisors would benefit greatly from looking at history, and in particular, Gerald Ford’s handling of two separate investigations on his brief presidency. After taking office in August 1974, the press besieged Gerald Ford’s White House, demanding daily updates on the developments surrounding Ford’s predecessor, Richard Nixon, and his possible prosecution for his role in the Watergate affair. Ford found the press demands editorials suffocated his executive and hamstrung his presidency. In order to allow his White House to govern more effectively, Ford pardoned Nixon of any crimes he might have committed while president. But Ford misread the American public and Congress. His actions had merely enflamed the situation further, and raised suggestions that he was part of the elaborate cover-up. 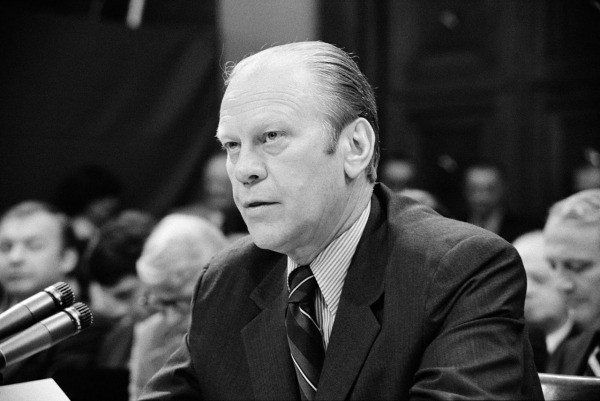 In an effort to dismiss such thoughts, Ford appeared before the House Judiciary Committee to explain his reasons for the pardon. He was the first sitting president to testify before a congressional committee since Abraham Lincoln. His appearance, he said, was ‘so that most Americans would understand what was done and why it was done’. Ford took a calculated risk by appearing before the Democrat-dominated committee. He was a politico through and through, elected to Congress thirteen times as a Representative for Michigan’s fifth district, and had been House Minority Leader before Nixon’s Vice President. If any of the modern presidents had the experience to deal with the committee, it was Ford, who knew exactly what he was letting himself in for, that day. His outstanding performance, that of a man with a determined conviction that he done the right thing, helped stifle some of the public’s criticism.

Ford and his advisors could have shown Trump how to exercise privilege in an effective manner. During the 1975 congressional enquiries into the intelligence community, Ford and his National Security Advisor, Henry Kissinger, understood that citing executive privilege on information that Congress required for their investigation would turn public opinion against them. The Ford White House reluctantly agreed to share classified information with the committees chaired by Senator Frank Church (D-ID) and Representative Otis Pike (D-NY). When the Pike Committee refused publicly to keep the information out of the public sphere, Ford was able to stop co-operating with the committee on the grounds of national security without losing public support.

Will Trump look to Ford’s crisis management to help him gain public support? Trump and Giuliani have already played their executive card relatively early in the investigation. While Mueller and his team are over a year into their enquiry, other independent counsels’ investigations have lasted far longer. The Iran-Contra enquiry lasted over six years, while the Whitewater affair lasted almost eight years. Historically, indictments issued by the special counsel investigations tend to increase in number as the investigations lengthen. The Trump administration’s use of executive privilege so early on has only increased suspicions that the executive branch is involved in covering up any collusion.

It is unlikely that Trump will voluntarily testify to Mueller, in the same manner that Ford did before the House Judiciary Committee. Firstly, Trump has neither the political experience nor the skill to deal with the questions posed by the former head of the FBI and fellow investigators. Secondly. Trump does not have the same respect from his political opponents as Ford did from the Democrats of the 94th Congress, How then does Trump manage to survive the threat to his administration? Trump may yet turn to Ford for guidance. The presidential pardon, used mist famously by Ford, is Trump’s most powerful weapon. Constitutional scholars still debate over whether Trump can pardon himself, but Trump needs to bear in mind the scrap of paper that Ford carried around with him after pardoning Nixon. It contained part of the 1915 Burdick vs United States (236 U.S. 79) Supreme Court ruling on presidential pardons. The ruling stated that a pardon ‘carries an imputation of guilt’, and that accepting a pardon was ‘a confession of it’. Trump should think twice before using it and claiming there was no collusion between himself and the Russian interference in the election.