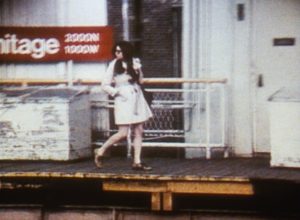 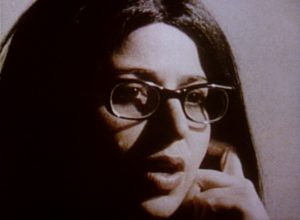 The Centre for Film and Aesthetic Cultures at the University of Reading is delighted to host an online screening of Shulie, a shot-by-shot remake of an obscure 1967 documentary on Shulamith Firestone, an American art student who was on the cusp of becoming a major figure within the newly resurgent women’s movement with her 1970 work, The Dialectic of Sex. Director Elisabeth Subrin will join feminist scholars Natalie Thomlinson and Rachel Garfield in conversation after the screening to discuss the legacy of both the film and of Firestone. Called ‘a thing of wonder’ by The New Yorker, Shulie raises fascinating questions about the sometimes difficult place of the feminist past in the feminist present that are still central today, and, in the director’s own words, seeks to ‘investigate the mythos and residue of the late 60s’.

‘Staging an extended act of homage, as well as a playful, provocative confounding of filmic propriety, Subrin and her creative collaborator Kim Soss resurrect a little-known 1967 documentary portrait of a young Chicago art student, who a few years later would become a notable figure in Second Wave feminism, and author of the radical 1970 manifesto, The Dialectic of Sex: The Case for Feminist Revolution. Reflecting on her life and times, Shulie functions as a prism for refracting questions of gender, race and class that resonate in our era as in hers, while through painstaking mediation, Subrin makes manifest the eternal return of film.’ —Mark MacElhatten and Gavin Smith, Curators, Views from the Avant Garde, The 36th New York Film Festival, Lincoln Center, New York

Elisabeth Subrin is Brooklyn-based filmmaker, visual artist, writer and associate professor of film and media arts at Temple University. Her critically acclaimed feature narrative A Woman, A Part was released theatrically in 2017 and played in film festivals globally. Her award-winning short films and installations have screened and exhibited internationally in film festivals, museums and galleries. Subrin has had solo screenings and exhibitions at venues such as The Museum of Modern Art, NY, The Cinematheque Francais, The Vienna Vienale, The Film Society of Lincoln Center, the Rotterdam International Film Festival, and in a retrospective at Sue Scott Gallery in New York. A 2020 Fulbright Fellow, she’s currently working on a film and book project about the late French actress Maria Schneider, best known for her role in Last Tango In Paris. She was the creator and editor of the feminist blog Who Cares About Actresses?

This event will take place via zoom. Please register for a space on the Eventbrite page here for details of how to access the meeting: https://www.eventbrite.co.uk/e/shulie-with-q-and-a-with-director-elisabeth-subrin-tickets-148189810713