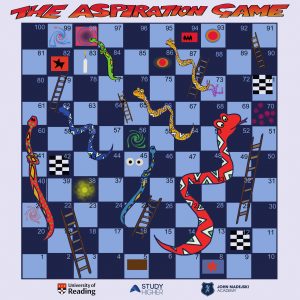 In November 2017 the YRs invited other JMA students from Years 7-10 to play the game. In March 2018, the game was played in Reading Girls’ School (RGS) with a team of nineteen Year 8 students, also in March children from Years 1-6 played the game in The Palmer Academy.

In total, around 70 young people were involved with playing the game from these three venues – all games were led and supervised by the YRs. The game appeared to be a simple and effective way of getting people talking things through, and thinking about where improvements can be made. It also helped students to express what they feel. As some students put it, the process gave them a voice.

About 30 JMA students from years 7, 8, 9 and 10 played the game. Participants sat around a metre-sized board based on the snakes and ladders game; snakes hindered and ladders helped aspiration. Extra symbols such as stars, or circles invited further reflections. The adult Whitley Researchers were on hand to help record the conversations and report back on the day. At game completion individual students completed a personal aspiration card.

Instructions for the game can be downloaded here.