In memory of John Ord 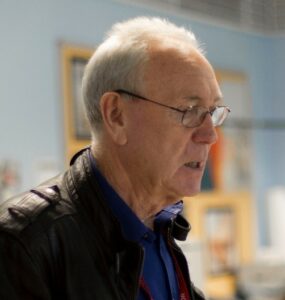 This page pays tribute to John Ord, who worked with local residents, Whitley Community Development Association (WCDA) and the University of Reading to set up and co-ordinate the Whitley Researchers, a community research network in Reading.

John was passionately committed to community-based research, which he said was about the ‘generation of knowledge powerful enough to make for real change and for social justice’. He described it as an approach ‘rooted in urgent need and embedded in the everyday lives of those who are usually “done to” in traditional research’, allowing them to identify critical issues and use research to find practical answers.

John’s knowledge and commitment were integral to a number of projects which tackled exclusion, poverty and deprivation in Reading, through participation. These included the Whitley for Real partnership, the Whitley Young Researchers and Growing up in Reading.

Below, John’s friends, colleagues and community partners pay tribute to a man of action who championed the voices of ordinary people and leaves an enduring legacy.

There are rare moments when your path crosses with someone who changes your life for better and sets you on a new journey.  John was one of those people for me and little did I know that when he walked into my office on a wet November day in 2013 that it would lead to nearly a decade of community-led research and activism.  John was an inspirational researcher, educator and community organiser who strived for social justice, but I will also remember him as a mentor, friend and one of the most funny, generous and kindest people I’ve had the pleasure to know.  We miss him very much and we’ll make sure his legacy lives on in all the work that follows. Sally

The last time I saw John was for a discussion about healthy eating in Whitley. John had put forward a load of ideas and they all, quite deliberately, put people ahead of the remit. He said we should get local people together and see what evolved, he absolutely believed in what ordinary people could do. John was determined that every person should have a voice and that what people say has value. It’s his confidence in ordinary people that gives me confidence.  John was a man of action – he worked consistently for what he believed in. He has my respect and thanks. We miss you John. Lorna

John was what I would describe as ‘just a good bloke’. Just, not as in that is all he was, for he had great depth of character, but because he was straight forward, easy to get on with and honest. I absolutely loved the time that John, Sally and I spent working together. His work has had an impact far and wide and has changed the lives of many significantly for the better and forever, that was John. He spent his life doing just that because he was ‘a good bloke’. We need more John Ords in the world and I miss him tremendously. Paul

When I first met John, it was in May 2014 in Hexham Road Community Centre. He was then the rep for Big Local and the Lottery Millions. John had been in my interview and although I was nervous and probably waffled on, he came across as a quiet man, but he had a reassuring smile. He always had a habit of putting you at your ease. Black leather jacket, blue t-shirt, blue jeans and he had the shiniest black shoes! He was the most knowledgeable community originated man from Liverpool, who knew so many people and made community engagement look easy. He was the first one to go collecting research data and I can remember the first project we worked on together was the transport project. He was standing in the local supermarket with the other researchers and would knock on doors to get people’s thoughts. Over the years I counted on John as a friend as well as a work colleague. Our birthdays were one day apart so it was a text message of happy birthday to John one day and he would send me birthday wishes the next day. John had a very special way of encouraging me and making me believe in myself and that I was valued. Little did I realise that 7 years later, John would be cruelly taken from us too soon. He will leave a legacy of projects and people that will want to carry on his important work. I miss you every day, John – you are a hole we will never be able to fill. Sonia

John and I didn’t always see eye to eye, but I think that’s what we enjoyed about talking to each other!! But John was so much more than someone to argue with!! I will miss him and the banter/discussions/arguments. Rest in Peace somewhere near Liverpool. Liz

Just to say thank you John for your words of encouragement and support over the years as I worked alongside you as a Whitley Researcher. You are gone but will definitely not be forgotten. Sandra

John your passing has shocked us all although our group is very small. The passion for the work you did with us the Researchers and the kids. Rest in peace co-worker, dear friend, your work with us will never end. Naomi

It is with great sadness that, as the collaboration between Brighter Futures for Children, the Whitley Researchers Collective and the University of Reading were finalising drafts and concluding this report, we learnt that the main research fellow for this project, John Ord, had passed away. John was pivotal to this project. His experience and passion for the rights and experiences of children and childhoods to be preserved by the adults around them was infectious and he brought the voices of the children and young people in this project to life. We are thankful for all of John’s work alongside Brighter Futures for Children, and on his passing, reading of his many achievements before this collaboration. He was an ambassador for children and young people and we are so grateful that we got to work with him on what was to be his final project. Our condolences remain with John’s family, friends and colleagues. Paul Gresty (Education Strategic Lead) and Fiona Hostler (Safeguarding and Children Missing Education Officer) on behalf of Brighter Futures for Children

Sally, John, Students, Whitley Researchers and partners and the pupils of JMA in the Welcome Home project