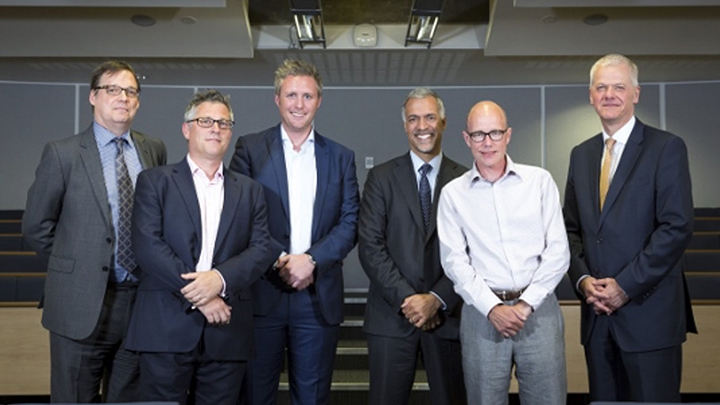 On the evening of Tuesday 16 June 2015, Henley Business School hosted an event on the topic of the ‘Business of the Beautiful Game’.

The Vice-Chancellor of the University of Reading, Sir David Bell, chaired an informal panel discussion, which bought together external industry experts and faculty to discuss current issues in the business of football and football finance.

The stands were packed at the Henley Business School theatre at the University of Reading for a unique opportunity to see a team of football ‘galacticos’ debate a range of issues facing the game.

Introduced by the Dean of Henley Business School, Professor John Board, and with the University’s Vice-Chancellor, Sir David Bell (DB), refereeing, the stage was set for a ding-dong battle!

The line-up of the panel for the evening kick-off was:

Has Football Been Spoiled?

DB opened the discussion by quoting from J B Priestly, who said of football in 1934: “Nearly everything possible has been done to spoil this game… but the fact remains that it is not yet spoilt, and it has gone out and conquered the world.” (in English Journey), and asked the panel: ‘has it been spoiled?’

TB reflected on globalisation, and the impact that has had on the game but asserted that is certainly was spoiled in his view.

MB highlighted the seismic changes in football, from the days when clubs were owned and run by local foundry owners for the benefit of their workers, and certainly with no thought of charging spectators who wanted to watch. Indeed, he noted, Manchester United were asked to leave their first ground because they wanted to impose such a charge. In the last 20 years, the potential profits have attracted a much wider pool of owners, and whilst teams in France, Germany and Italy are on the same curve, the commercialisation of the English Premier League has put it well ahead of any other nation.

And PN noted that the advent of the Premier League – in tandem with the introduction of satellite television – led to a massive increase in broadcast income, commercialisation, and huge international fan bases.

DB asked whether football has become a middle-class sport.

AB responded that he believed that Chelsea is definitely a middle-class club! He felt that it was a good thing that games were still not broadcast in the UK at 3pm on a Saturday, despite the fact that these games are broadcast live in other countries. Nevertheless, the smallest Premier League club will earn £100m+ annually from TV rights from 2015, and with more money coming into the game, he felt it was inevitable that this will create more competition and further demand.

MB answered the ‘middle class’ question by suggesting that this was a peculiarly British question, and not one that would be asked anywhere else in the world. In his view, so long as fans have a good time and their clubs win trophies, they will be happy. The reality is that the audience for football has changed radically, and for the better, with many more women and youngsters now regularly going to games.

Can Only the Top Teams Compete?

DB asked TM whether it was now universally accepted that only very few teams will be able to compete at the top level, a view with which TM agreed. ‘In the mid-90s, there were examples of teams – most notably Ajax and Red Star Belgrade – winning European trophies with home-grown talent, and whilst much is being spent on youth development, players are now moving on earlier on their career, and there is evidence of the top clubs hoarding the best young players.

DB then asked PN about the impact of the Financial Fair Play (FFP) regulations. PN noted that the list of the top 20 teams had changed very little, whilst accepting that Manchester City and PSG have had the backing to break into football’s elite. PN explained that the FFP regulations require clubs to manage their finance so they at least break even, and of the 20 clubs in the English Premier League, 19 made a profit last year. ‘So the FFP rules are beginning to take effect, and owner equity is being restricted, solidifying the stability of the clubs.’

MB added that we have to look at why the FFP rules were introduced, citing the increased flow of funds into the game. ’The whole industry has seen dynamic fluctuations,’ he said, ‘but some clubs still go bankrupt because they haven’t adapted quickly enough. So whilst FFP may have frightened off a couple of investors, the money coming into football is generally being better managed.’

Do Footballers Earn Too Much?

DB put it to AB that ‘fans accepted that the biggest stars should earn big wages, but are disillusioned with rich, mediocre players.’ AB agreed that fans don’t care what players earn, so long as they perform on the pitch. PN concurred, adding that: ‘fans want trophies, and the best players – like pop stars and F1 drivers – are entitled to earn top wages. In general, though, players’ wages are in line with the market rate.’ And TM reflected on ‘two waves of inflation’ in football, the first being in the early-2000s, when Manchester City and QPR ‘spent way more than they could afford,’ adding that in his view, whilst FFP has brought much needed regulation, it could have been more effective.

Are there Too Many Teams?

The next question from the chair raised the issue of whether there are too many professional teams in the English leagues. TM suggested that the statistics indicate that there are too many, but noted that there is a trend towards amongst ‘football hipsters’ going back to support small, local clubs. And he noted that if based on the European model, a 2-division structure.

DB then invited questions from the audience, which included the following (with answers paraphrased)

DB thanked the panel for their insights and opinions and closed the discussion.

After the debate, audience members gave their reactions; below is a representative selection of comments made:

‘Really enjoyable – what a great mix of people and opinions.’

‘I thought it was an excellent discussion – it’s just a shame that there wasn’t time for more of the issues to be explored in more detail.’

‘I’d like to have heard more about the rise of football in Asia, but the topics covered were relevant and interesting, and it was especially interesting to get such a range of opinions.’

‘It’s the first event we’ve been to at the University, but it was superb, so we’ll definitely be coming back for more.’

‘I’m not really a football fan, but I found it fascinating to hear about the business side of things.’

‘How marvellous to be able to call upon the alumni to create such a high-profile, stimulating discussion.’