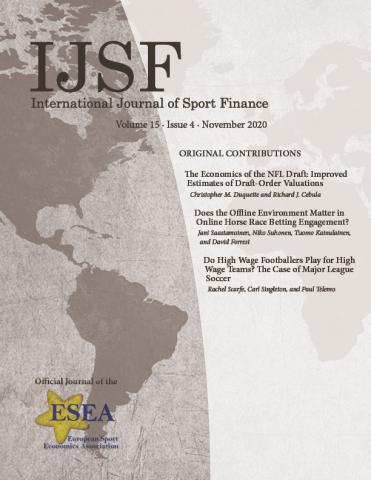 Carl Singleton, member of the Football Research Group, has his latest research on the football labour market published in International Journal of Sport Finance. This was joint work with The University of Edinburgh’s Rachel Scarfe and Paul Telemo.

Intuition and sports knowledge suggest that the most talented professional footballers play for the best teams, i.e., positive assortative matching based on productivity. We consider Major League Soccer between 2007 and 2017. We estimate a wage equation, finding that player and team fixed wage premiums are negatively correlated. This is a puzzle, especially because our estimates of players’ wage premiums do correlate strongly with measures of their performance on the pitch, and there is evidence of positive teammate sorting. However, the estimated wage premiums of MLS teams are highly and negatively correlated with their success in the league and their home game attendances. This is consistent with an explanation whereby part of an MLS team’s success comes from its ability to bargain down the price that it pays for talent.