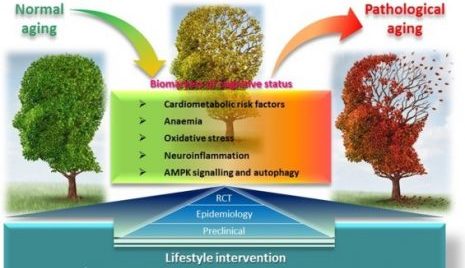 As people age they become increasingly susceptible to chronic and extremely debilitating brain diseases. The precise cause of the neuronal degeneration underlying these disorders, and indeed normal brain ageing remains however elusive. Considering the limits of existing preventive methods, there is a desire to develop effective and safe strategies. Growing preclinical and clinical research in healthy individuals or at the early stage of cognitive decline has demonstrated the beneficial impact of nutrition on cognitive functions.

Spencer’s research group is recognised as one of the leading groups in the world dedicated to working mechanistically at the interface of dietary phytochemicals and brain function. A major output from the group has been to help define the paradigm-changing concept of how flavonoids and other polyphenols act via non-antioxidant mechanisms of action in vivo to mediate physiologically/clinically significant benefits on human brain and vascular function.

The present review is the most recent in a series produced by the Nutrition and Mental Performance Task Force under the auspice of the International Life Sciences Institute Europe (ILSI Europe). The latest scientific advances specific to how dietary nutrients and non-nutrient may affect cognitive ageing are presented. Furthermore, several key points related to mechanisms contributing to brain ageing, pathological conditions affecting brain function, and brain biomarkers are also discussed. Overall, findings are inconsistent and fragmented and more research is warranted to determine the underlying mechanisms and to establish dose-response relationships for optimal brain maintenance in different population subgroups. Such approaches are likely to provide the necessary evidence to develop research portfolios that will inform about new dietary recommendations on how to prevent cognitive decline.

Decline in cognitive abilities with age occurs in healthy individuals throughout the adult lifespan. Moreover, the line between normal and pathological ageing is not well-defined as neurological diseases start years before any clinical symptoms arise. Several health conditions such as CVD, diabetes or obesity are closely related to cognition. Therefore, when identifying dietary approaches to promote healthy brain ageing a holistic approach should be considered including nutrition, exercise and lifestyle factors, which not only target the brain but also overall cardio-metabolic health.

The mechanisms associated with normal ageing, including oxidative stress, neuroinflammation and vascular dysfunction are the same as those contributing to the development of neurological diseases. However, in these pathological conditions, the mechanisms contributing to ageing are exacerbated and triggered by different factors which might be genetic or environmental.

Preclinical studies in animals have consistently demonstrated the positive impact of several dietary components on cognitive performance and epidemiological studies have showed successful association of select dietary patterns with cognitive status. Particularly there is reasonable evidence that consuming Mediterranean-style diets protects against cognitive impairment. RCTs approaches have showed mixed results with intervention with single dietary components generally disappointing while some multi-nutrient/non-nutrient interventions have yielded more encouraging results. These observations are consistent with the results from epidemiological studies indicating that an adherence to dietary patterns, rather than adequate intake of single dietary components may be the most effective means of protecting against cognitive decline. A major objective of future research is to define the nutritional requirement for healthy cognitive ageing, and to translate these into effective dietary recommendations.