The mapping workshop at the fun day gathered a great response from the community; everyone was very enthusiastic about getting involved. 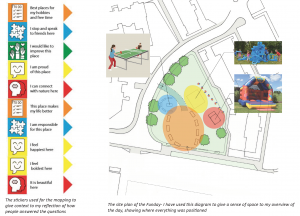 For our contribution to the day we set up our mapping stalls and a table tennis table, along with balloons and stalls. There were four other stalls, a stall about recycling, the police, RIS Reading and the local counsellors. The counsellors displayed the designs for the Orts road playground, so the community members could vote on which design they preferred. Meanwhile, the imaginationplayground and bouncy castle were set up along with an ice cream van. The MESA group from the Philippines came along to the day and were a great help in encouraging people to join in.

The first people to take part were a mother and her son who proved to be very sociable through the mother’s response to the question, ‘Where do you stop and speak to friends?’, which she responded with ‘everywhere’. It was great to get feedback from such a sociable individual from the area. Her son stated how they love spending ‘their free time’ at their local church, which unfortunately has poor maintenance after events which is what he wanted to be improved. 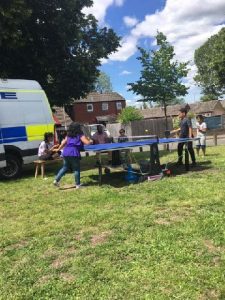 We spoke to a woman with a baby who was very interested in being involved in the mapping despite being rushed oﬀ her feet. Her involvement showed how everyone has diﬀerent lifestyles, as she responded to the question about hobbies and free time with I don’t have hobbies or free time because I have a baby.

A woman joined in and spent quite a long time deliberating on the questions as she lives in the area around orts road but works and her child goes to school in a different area, so she was less familiar with the site. She had strong opinions on the fact that she would love a new swimming pool in the area as the existing pools have limited opening times and no longer have public diving board. Although, she is ‘proud’ of the River Kennet as her and her son throw bread to the ducks. They also spend time at a polish church which is on the outskirts of the site.

Most people chose their local community centres and churches as placed they are proud of and feel happiest. Overall, we got very positive responses to all the questions even what you would like to improve people had to really think about it; nothing sprung to mind, and some people even said nothing. Most people just ended up stating that they would like to improve Orts Road with one of the proposed play parks. The day was a success and we gathered lots of information and spoke to many people. We also managed to get quite a few people signed up for further discussions about the area and people to make further comments on the index cards. 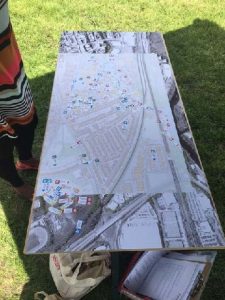