Sub-seasonal “flash” drought events are rapidly developing, multi-week periods of elevated temperatures and evapotranspiration, but reduced soil moisture and precipitation.  Flash droughts during the growing season can severely damage agriculture.  Many flash drought events coincide with heatwaves, which increase stress on humans and ecosystems.  However, most of the scientific literature on droughts focuses on conventional, slowly developing, seasonal-scale droughts.  Recent research, including studies by the supervisory team, have identified continental Europe as a region at risk from flash drought events.  Other “hot-spot” regions of flash drought events include central North America and eastern Asia.  Despite these advances, the atmospheric and land-surface mechanisms behind flash droughts remain unclear.  It is also not clear how well these events can be predicted in sub-seasonal forecast models.  Early and effective warnings of flash droughts may allow the agricultural sector to take mitigating action in advance of an event.

Following the initial historical analysis, the student would use reanalysis to examine teleconnections between flash drought events over Europe and events in other “hot-spot” regions for flash drought activity, such as North America and Europe.  The hypothesis is that global atmospheric extra-tropical wavetrains, such as quasi-stationary Rossby waves, enhance the risk of flash drought events across the Northern Hemisphere.  The supervisory team have global and regional catalogues of flash drought events that could be interrogated for this analysis.

The student will produce novel understanding of the atmospheric and land-surface mechanisms behind rapidly developing drought events, which have received relatively little attention in the literature despite their considerable effects on human and environmental systems.  The student will also increase our knowledge of the extent to which flash drought events in one region (Europe) are correlated with those in other regions, and the extent to which these events are controlled by larger-scale atmospheric variability.  Advances in this area would offer the potential to predict flash drought events, or the changes in flash-drought risk, using statistical modelling.  This student will also evaluate whether flash-drought events can be predicted using contemporary sub-seasonal prediction systems, at the lead times required for the agricultural and health sectors to take mitigating action to reduce the damage caused by these events.  To date there is little research on prediction skill for flash drought events, despite the growing body of literature on sub-seasonal predictions more generally. 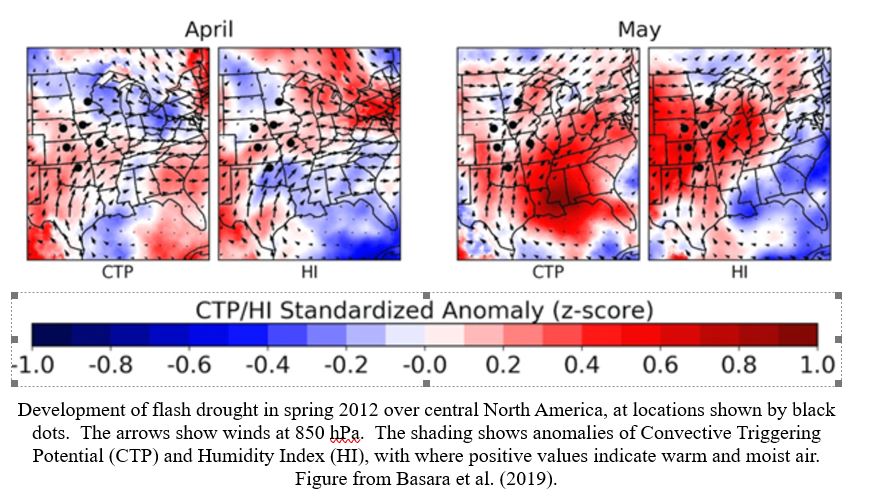 We seek to recruit a student with excellent knowledge of statistics and experience analysing large datasets, as most of the proposed relies on applying statistical techniques (e.g., correlations, composites, Empirical Orthogonal Teleconnections) to large and/or high-resolution datasets (e.g., modern reanalysis data, sub-seasonal reforecasts).  We seek to recruit a student with a good background in physics and mathematics, as the project involves understanding physical mechanisms involving the atmospheric circulation and land-atmosphere interactions.