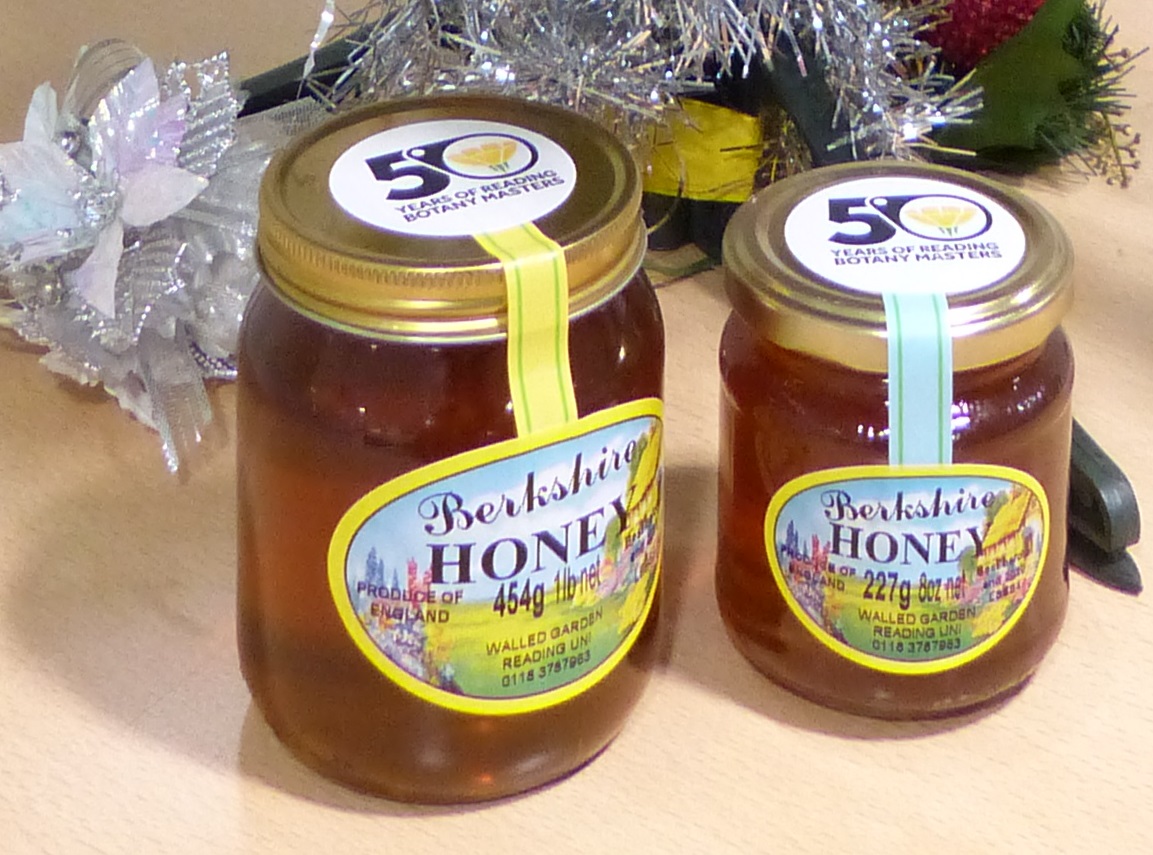 Honey is made by bees working with their favourite botanical products!   It is a wonderful, magical nectar of the Gods produced by insects (bees) gathering nectar and pollen from flowering plants during the ecological process of pollination.

For 2019 the School of Biological Sciences honey produced from our very own Walled Garden (part of the Harris Garden) bears the logo of our 50th anniversary celebrations! This honey is selling fast but if you are quick it can be purchased by contacting Helen Dominick at h.dominick@reading.ac.uk.

THE HARRIS GARDEN BEE PROJECT
The walled garden in the Harris Garden is used by the School of Biological Sciences and is home to a small apiary (currently 3 hives) which was financed by the University Annual Fund in 2014. The apiary is managed by two technicians alongside their other duties including upkeep of the walled garden, SBS glasshouses and laboratory based teaching and research support. Beekeeping has found a place within the teaching modules and for outreach and has provided the opportunity for some students to get hands on experience.

A single colony of honey bees, ours are Apis mellifera hybrids, living in a beehive may number 50,000 in the summer. The colony has a caste system consisting of a single queen, the only fertile female, the male drones in spring and summer and many thousands of female workers. The drones mate with new queens but have no other role and are driven out to die in autumn. Worker bees begin their duties tending the colony by processing nectar into honey, packaging pollen and tending to the queen and brood. They will start to produce wax which forms the comb from abdominal glands before maturing into guards and then flying to collect nectar, pollen, water and propolis. Water is very important to the bees for diluting the honey and cooling the hive which must have been a major undertaking this summer. By six weeks old, summer worker bees will be exhausted and die.

We are fortunate that the bees have access to a huge range of plants from which to gather nectar and pollen throughout the year giving us the opportunity to harvest a reasonable amount of tasty and variable honey as well as see a vast number of ‘bumble bees’ and butterflies. Early in the year we have snowdrops and narcissus followed by the trees including the apples and pears in the orchard and cherries in the cherry circle. Later in the season we have lime trees, marjoram, rosemary, blackberries and the garden flowers. The Persicaria and Sedum in the Autumn Bank are always popular. Every year is different and honey yield can depend on weather conditions and if we have a laying queen or swarm. We also have a duty to ensure our bees do not starve over winter if we remove too much honey thus leaving them some and providing syrup and fondant to boost stores if required.