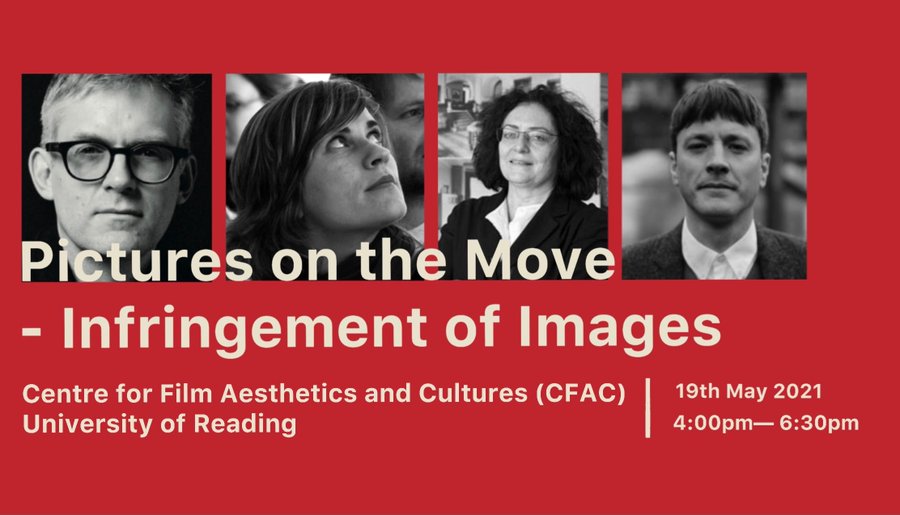 Contributors to the Discussion Event:

The experience of time switching to slow motion during the Covid 19 pandemic was accompanied by an enormous speeding up in the production of digital images. Museums, galleries, cinemas, opera houses, and theatres transformed their live action events into video streaming, videos on demand etc. The transformation of performative arts in moving images, the transformation of museum’s and galleries’ spatial shows of objects and installations into virtual images is not a new practice, but it signals an infringement of art forms and displays of all kinds through the rapidly growing digital image. Should we look at the digital, technical image as a medium or a message? (Gertrud Koch, 2021)

In his autobiography, Little Did I Know, Stanley Cavell notes that ‘the eye teaches scepticism; the eyelid teaches faith.’ I take this pensée and repurpose it through Theodor W. Adorno’s aesthetic theory of (experimental) film and (expanded) cinema, wherein moving images are said to be based ‘on a subjective mode of experience which film resembles and which constitutes its artistic character.’ In this context, the pictures that constitute Alexander Kluge’s films are especially illuminating insofar as they are ‘icono- clastic,’ ‘diminishing pictures, never augmenting pictures.’ They are, as ‘perpendicular’ pictures, ‘set off against each other in the course of their appearance.’ Kluge, too, privileges film as taking place ‘in the head of the spectator,’ which, perhaps, suggests that – for both Adorno and Kluge – film spectators would do well to see by shutting their eyes, and film- makers would do well to edit by opening their inner-eye! Kluge’s films are, perhaps, best encountered as poetic/political pictures operating between Walter Benjamin’s dialectical images and Adorno’s conceptualisation of after-images. In this discussion event, I am particularly interested in thinking through such filmic and cinematic pictures as an ‘infringement of art forms’ and as new ‘media arrangements.’ (James Hellings, 2021)

In pandemic times, places of work and production are encoded by different types of media: Artists’ spaces become live video streams, work conversation become tiled events on ZOOM. This mediatization of the places of production means more than a simple reproduction of “normal conditions” transferred to realms of digital media: the technical logics, time regimes and glitches inscribe themselves in the production and circulation of knowledge. It could be fruitful to confront the current media-technological transformation and the displacement of spaces of labour with a historical constellation at the fringes of pictorial production, film-technical encoding and theory site: In Siegfried Kracauer’s last book, History – The Last Things Before the Last (1969), the artist’s film Le Mystère Picasso (Clouzot, 1955), appears as a “Denkbild” that opens up a space between painterly production and filmic time in order to reflect on different regimes of temporality and their mediatic emergence. (Katja Müller-Helle, 2021)

Dr Katja Müller-Helle is head of the Research Centre The Technical Image at Humboldt University of Berlin. 2013- 2019 she was a post- doctoral scholar at the Centre for Advanced Studies BildEvidenz, History and Aesthetics at the Free University of Berlin. In 2014/15 and 2018 Katja Müller-Helle was a fellow of the Volkswagen Foundation at the Getty Research Institute in Los Angeles. She is co-editor of “Bildwelten des Wissens. Jahrbuch für Bildkritik.”

The film HUO is a semi-fictional portrait of the curator Hans Ulrich Obrist in which he asks questions that remain unanswered. In the last three decades Obrist has conducted, archived and published more than 4000 interviews with artists, architects, writers, musicians, designers, philosophers and scientists. His interview project is the starting point for the film, in which he appears in various locations in London over a period of ten years. Questions are asked, reflected on and recited. He studies an interview by the filmmaker Alexander Kluge with Jean-Luc Godard and performs the addressing of questions in front of the camera. Obrist comes to the conclusion that some interviews remain unrealised. HUO will be available here on Vimeo from 4pm on the day of the event. (Johannes Maier, 2018)

Dr Johannes Maier’s work has been shown internationally in group and solo exhibitions, as well as in film festivals including: New Contemporaries, East International Norwich, Short Film Festival of Oberhausen, Kunstverein Bielefeld and the Short Film Corner in Cannes. Johannes is co-course leader in the undergraduate film course at the University of East London. His work documents events in which he collaborates with people and institutions such as interpreters at the European Commission and a news- room picture editor at the BBC. The focus of Maier’s work, intentionally positioned at the boundaries of art, documentary, and media is a critical engagement with televisual forms.