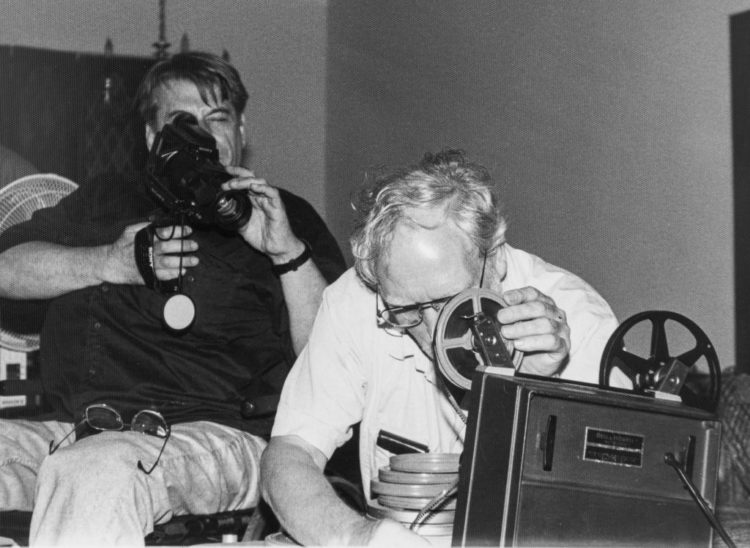 LUX X CFAC presents Dwoskin, Disability And… Autobiography: Trying to Kiss the Moon (1994) + discussion as part of the AHRC-funded project, The Legacies of Stephen Dwoskin.

This is the the third in a series of screening and discussion events exploring the experimental filmmaker Stephen Dwoskin’s complex relationships with disability and creativity, memory and materiality. This event is co-hosted by the LUX and the Centre for Film Aesthetics and Cultures (CFAC) and supported by the Arts Committee and the Diversity and Inclusion Initiatives Fund of the University of Reading.

While feminist critics often associated Dwoskin’s films with the male gaze, he was equally prepared to turn the camera on himself. He conceived of TRYING TO KISS THE MOON (1994) as an autobiographical film, after seeing a cache of his father’s home movies, shot during his childhood in New York, many of them showing him before he contracted polio and lost the use of his legs. These inspired reflections on, among other themes, disability and diaspora.

And yet the finished film is far from straightforwardly autobiographical. As Laura Mulvey has written, TRYING TO KISS THE MOON “tells the double story of memory, bringing together the beauty of its documents and the sadness of its elusiveness”. Seemingly objective documents – both his father’s and his own home movies and still photographs – do not speak for themselves, even to those who were there at the time.

Instead, TRYING TO KISS THE MOON is a kind of bricolage that never smoothly integrates its constitutive parts. The documents are material objects, imperfect, incomplete, and made to seem so through Dwoskin’s painterly technique. Finished on the cusp of the digital era, it can be seen as a farewell to analogue formats. It won praise from Raymond Bellour, and Nicole Brenez saw in the home movies “magical moments” presaging the rest of Dwoskin’s career: “everything is already there!”

The event will begin with an introduction and communal viewing at 7pm on Thursday 22 July, followed by a discussion with Jenny Chamarette (author of Phenomenology and the Future of Film), Rachel Garfield (author of Experimental Filmmaking and Punk), and Henry K. Miller (editor of The Essential Raymond Durgnat) from the AHRC-funded project, ‘The Legacies of Stephen Dwoskin’s Personal Cinema’, led by Rachel Garfield.