The Young Researchers collaborate with the Whitley Researchers, but provide a voice for the younger generation in their own community.

“How effective would it be to put a group of children in charge, to make the greater change, to inspire a movement, to push towards a better Whitley? As a young researcher I know I am the future – working together, working for you.”
– Christina, Young Whitley Researcher

“My time being a young researcher was a very beneficial experience that allowed me to explore my options when choosing my career path. It motivated and enabled me to have a voice for people of my age to help them choose and reach their own aspirations. Being a young researcher was an amazing opportunity as nowadays teenagers’ opinions are discarded due to our age. Therefore, I’m happy as I was able to be part of a group that contributed to making a change in Whitley.”
– Kalvin, Young Whitley Researcher

“I have really enjoyed my time as a young researcher. I have loved hearing people’s different opinions and perspectives and showing that having a voice is extremely important: your opinion matters. The past couple of years have shown me that if you want change you need to be determined and fight for it. My main aim was to help young people have a voice and to always have an opinion no matter what age, race or gender. I never realized how big this project would be and seeing the outcomes makes me proud to be a part of it.”
– Talia, Young Whitley Researcher

The Young Researchers have grown from a group of students at the John Madejski Academy. They were initially brought together by their active interest in photography, and became increasingly involved in the research programme as the school agreed that their involvement could take place during school time rather than after the school day was over. From that time on the Young Researchers met for 1 hour per week on a rolling timetabled basis. This meant that time could be given to plan and develop events such as the Community Panel and the Aspiration Game event.

The research journey for the very first group of Young Researchers is illustrated here: 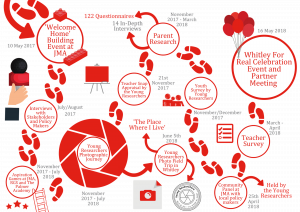 As the group’s understanding of their role developed, the Young Researchers became increasingly confident about gathering research material from groups that are sometimes quite difficult to reach. One example during the Aspiration Day event involved writing a questionnaire for teaching staff, canvassing staff and providing the research team with the completed documentation within a couple of hours.

In addition to their growing research skills, outside groups and individuals have been able to visit the group on a regular basis for discussions and questions about ideas and plans they have. This has been done in both formal and informal settings. In addition to this the Young Researchers have been able to visit other community groups and schools in order to work on aspects of the research programme.

The work of this group has continued to evolve and new groups of Young Researchers are developing. Most recently, they have worked on our FoodSEqual project. See the Projects & Partners page for more detail.

“Working in collaboration with the University of Reading has been hugely rewarding for the John Madejski Academy Young Researchers. It has been a delight to see how much engagement and enthusiasm the students have invested in working on a project based around their community. This will no doubt provide useful and tangible evidence for countless stakeholders and inspire those involved to continue their research journey through to University and beyond”  – Laura Ellener, former Headteacher

“It’s hard to believe that they are still only 14 and that they would not have been confident enough a year ago to even consider hosting the kinds of events they do now. As well as this they have developed a clear understanding of their role in shaping their own and others’ future through their individual and collective contributions. The research work undertaken has sparked an interest in them which means that I don’t think the research focus will ever truly end. It is evolving and so are their concerns and aspirations. … The approach works because right from the start the focus has been about avoiding pre-conceived framing of what the issues are.” – Paul Allen, Head of Arts, John Madejski Academy