University of Reading maritime history expert Dr Richard Blakemore has taken part in an AMA on Reddit, fresh from consulting on the launch of a new gallery for the National Maritime Museum on Tudor and Stuart seafarers and writing a chapter of the book accompanying the exhibition on ‘life at sea’.

The AMA also happened to coincide with #TalkLikeAPirate day, and as Department of History lecturer Dr Blakemore teaches a module titled ‘Pirates of the Caribbean: Empire, Slavery and Society, 1550-1750’, it stood to reason that pirates made an appearance in several of the questions asked.

Here’s just a short sample of some of the fascinating insights Dr Blakemore shared into life at sea between 1600 and 1800 – and yes – some facts about pirates: 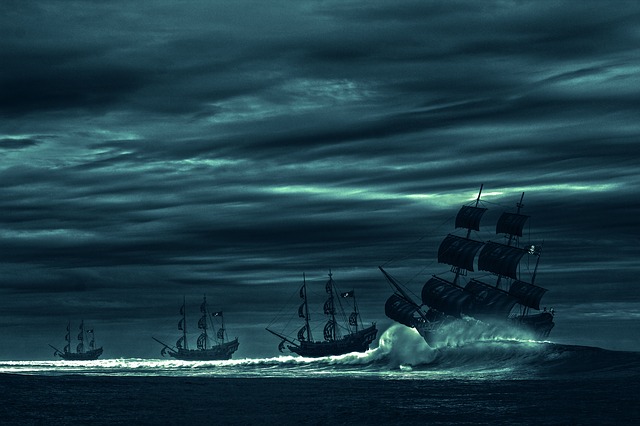 1) Films and games don’t offer the full picture about pirates.

While they do get some details correct, such as costumes and ships,they can lean towards offering a glamorous, romanticised view of pirates, with a notable absence of depictions of the less appealing side of life at sea, including common diseases, such as scurvy.

More importantly, according to Dr Blakemore,  “…a big part of the history of piracy is really about stories, as much as it is about reality.” The idea of a pirate developed in the 17th and 18th centuries, with pirates appearing in popular literature of the time, which subsequent generations of authors and filmmakers going back to those depictions for inspiration later on. Those texts weren’t necessarily entirely correct – meaning it can be difficult to define what a ‘real’ pirate might have been like.

2) Some sailors worked seasonally, but it wasn’t unheard of to spend decades at sea.

While on principle in the navy a sailor would only be employed for the duration of one voyage and was released at the end of it, they could also be ‘turned over’ by the navy and go from one ship straight to another. This was partly to address manpower problems and also sometimes to defer paying them until the end of their next voyage.

Some sailors moved between the navy and other ships, like fishing vessels. Some might alternate between farm work and fishing or coastal trade.

“…Some men, like Barlow, were ‘career’ sailors. Barlow spent over four decades at sea, and he was not the only one. I’ve even found records of men in their seventies still at sea, which surprised me!

“These men could often progress in their profession; Barlow rose from being an apprentice through various ranks until he was a master’s mate and, finally, a captain.”

3) There is evidence that a few crews did overthrow the ship using violence, but it didn’t happen very often.

“A few individual ships did experience violent mutinies where the crew took control and, usually, went on a piratical cruise – the most famous case is Henry Every taking over the Fancy. There were also some large scale mutinies where a whole fleet was involved – in the Downs in 1648, and at the Nore and Spithead in 1797, all of which had specific political causes. Out of the thousands of voyages that took place across this period, this type of mutiny was a very rare occurrence.”

However, what actually constituted a ‘mutiny’ is difficult to define. ‘Mutinous behaviour’, in theory, meant any disobedience to the captain or master of the ship. However, in practice, the discipline on board the ship would vary from situation to situation.

4) Some captains ran a tight ship, but it was rare for there to be restrictions around drinking

As Dr Blakemore puts it, “Some ships may therefore have attempted to regulate alcohol consumption, but I believe this was uncommon – seafarers were regarded as heavy drinkers anyway, and at least one commentator warned that pirates became very unhappy and hard to manage when the <drink> ran out.”

He adds “One of the problems with providing a definite answer on this, as with many other aspects of piracy, is that much of the evidence …is recorded in sources that were not written by pirates themselves, and so we cannot be sure how accurate a picture they give us.”

According to Dr Blakemore, “Work songs were probably common. They helped with the coordination and the rhythm of the work at sea. However, very few examples survive from the period I study – the seventeenth and early eighteenth centuries. Later songs may have been based on earlier tunes, but this is hard to be certain about.”

Unfortunately, however,  he adds that no known evidence exists to support the existence of the classic “yo ho ho and a bottle of rum.”

It’s #TalkLikeAPirate Day but is everything you know just stereotypes and 18th-century fake news? We asked @historywomble from @UniRdg_History…

Find out more at our final Open Days of 2018: https://t.co/4QbVrPSBdM pic.twitter.com/JH8Cs16Crm

Want to know more? Read the full AMA with Dr Richard Blakemore here, or follow him on Twitter @historywomble

Find out more about the exhibition at National Maritime Museum in Greenwich here.