The Ure Museum at the University of Reading is welcoming exciting new acquisitions to its collections, the Marjorie Homan Tablet and Stylus.

The wooden tablet features Greek script written by a pen and carbon ink. Intriguingly, the writing has never been studied before, so it is not known exactly what the tablet says, although one side of it appears to record an account of measures of wine. The bronze stylus, meanwhile, was used to etch on wax-covered tablets. The pointed end was used to write while the flat end was used to smooth over the wax so it could be reused.

Reading students will study these new additions to the collections and will produce more detailed labels for the artefacts in due course.

Professor Amy Smith, curator of the Ure Museum, said ‘Until now the Ure Museum collection didn’t have any examples of cursive Greek lettering. Beautiful artefacts with examples of ancient writing are precious indeed and we’re incredibly lucky that we managed to acquire this example formerly in the Maspero Collection (France, early 20th c.).’ 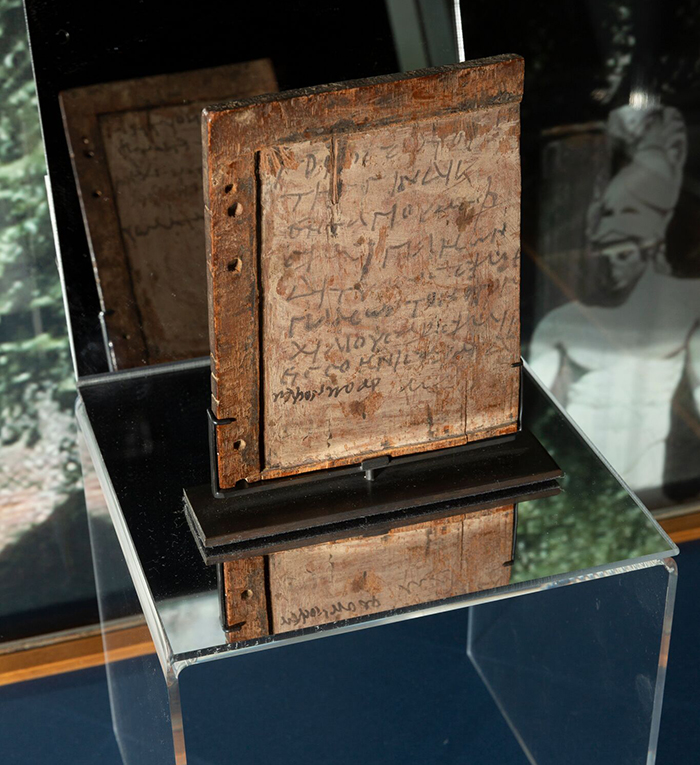 The tablet and stylus have been purchased by Martin and Rosemary Hughes for the Ure Museum in memory of Martin’s late mother, Marjorie Homan.

Martin Hughes said: “It’s a great pleasure for me to contribute something to the Collection, and the work of the Ure Museum and Classics Department.

I was fortunate in my retirement to encounter it and to discover that it’s one of the best research organisations in Classics in the United Kingdom.”

“It’s a tribute to my mother and my father too, who always encouraged me in my interest in classical studies, which led me to take a degree in that subject.”

The new acquisitions were welcomed by a special launch event on the 17th of October at the Ure Museum, which was preceded by a Classics Department Research Seminar led by Daniela Colomo of the University of Oxford: ‘Two recent discoveries in literary papyrology: Homer and Euripides.’

Visit the Ure Museum’s website for more details about their collections.