Our research team is a member of the IEIE research group (Improving Equity and Inclusion through Education) as part of the Education, Language and Learning Research Division (as part of the Prosperity and Resilience Research Division at the University level. Ourresearch largely focuses on early years education and issues of educational equity and equality and the role of adults in relation to the experiences and the support that children have in their early years of life. As part of this, our research focuses on strengthening the support available around these children, by for example empowering parents’-teachers’ partnerships in the early years. We aim to collaborate and engage both early years teachers/practitioners and parents of young children as they are the key individuals that support children’s learning and development in the early years. Through the 4Ps project we explore parent-teacher relationships and partnerships, the importance of this on pedagogy and practice and ways to improve it, which links closely to the Prosperity and Resilience research division.

This project involved the development of practitioner-parent partnership model underpinned by Froebelian principles. This model involved gaining the perspectives of parents and early years practitioners on how they work together in the interests of children, and how they view play as a starting point for their partnership. Following an initial assessment of potential participant perspectives, 2 intervention sessions were designed to bring parents and professionals together to learn about play and partnership grounded in Froebel’s principles.

This model recognises the complexity of the relationship between early years practitioners, children, and families. Children’s play has been chosen to form the basis of bringing parents and practitioners together to talk about partnership because because of its importance in the early years and the clear association with the well-being of children and families (Ginsburg, 2007). Play is also a shared activity in that both parents and practitioners will play with the children, and they will have something to learn from each other about how they play. In the early years children learn through play, and play is recognised as a ‘characteristic of effective learning’ in the Early Years Foundation Stage (EYFS) (Early Education, 2012, p.5). Early childhood research has highlighted the significant role of play as a key feature of learning at this age, closely tied to the development of cognitive, socio-emotional, and physical behaviours (Johansson & Pramling Samuelsson, 2006; Pramling Samuelsson & Asplund Carlsson, 2008; Melhuish et al., 2008).

Our intervention sessions were designed to help to strengthen the relationship between children, family members and practitioners, guided by Froebel’s pedagogy and having play at the centre as the main integrating element in children’s development and learning. Following an initial assessment of potential participant perspectives, two practitioner-parent partnership twilight sessions were designed to bring parents and professionals together to learn about play and partnership grounded in Froebel’s principles. After this, the participants provided feedback forms, completed a second questionnaire, and took part in interviews, so as to help us identify what they found particularly useful and how we could improve in the future! Sharing ideas on play with parents can provide those links missing between the school and the home environment and offer ways to work with parents (Canning, 2011). The development of practitioner-parent relationships through the medium of play will allow the research team to examine more closely how these interventions might strengthen practitioner-parent collaborations, as well as how practitioner-parent collaboration can support the role of play as a core element of learning and children’s well-being.

The focus of our research is on the relationship which involves the triad of child, parent and practitioner. It follows the principle of collaboration and positive partnership,and builds on the understanding of shared responsibilities between parents and practitioners. As such, in this report, parental involvement and parent engagement are used interchangeably to refer to the partnership between practitioners/ teachers with parents/ carers. 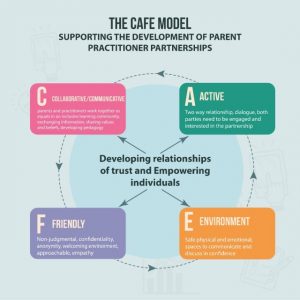 The CAFE model is a partnership model designed to summarise the key characterisitcs necessary in order to develop effective parent-practitioner partnerships. The CAFE acronym signifies that a Collaborative/Communicative (C), Active (A) and Friendly (F) Environment (E) is essential when aiming to develop effective parent-practitioner partnerships in early years education (see figure above). Such an environment would promote the development of relationships of trust and recognises parents and practitioners as equals, who are working together to ensure best outcomes for the children. This is a key aspect of the CAFE model, especially since previous models saw practitioners as the experts and parents as those in need of support, which increases pressure on practitioners and diminishes the expertise that parents bring to the equation. The CAFE model envisions parents and practitioners as equals and empowers both parties by recognising their strengths and seeing them as equally important in the partnership and in their role relating to the child’s learning and development. With the CAFE model in place, parents and practitioners can be empowered and develop relationships of trust, which would help to sustain and further develop the partnership between them.