The adult human gut is home to ~100 trillion microbes collectively known as the ‘microbiota’. The gut microbiota is largely composed of bacteria and plays a key role in maintaining our wellbeing. The microbiota assists in processing food into favourable energy sources that sustain our health. The gut microbiota also generates essential vitamins (e.g. vitamin K, folate, biotin), protects against gut infections and contributes to the development of our immune system. Over 1000 different species of bacteria reside within the gut, but composition varies between individuals and is subject to change (e.g. with age). Importantly, it is now clear that alterations in our microbiota are linked to various diseases, such as allergy, anorexia, autism, Celiac’s disease, Crohn’s disease (IBD), obesity and type-2 diabetes. However, the manner in which disease state is influenced by our microbiota is poorly understood, as is the way in which diet affects the composition of our microbiota to influence health and disease. 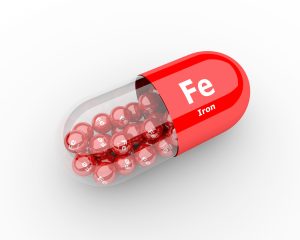 Iron is a minor yet crucial dietary component that is required by virtually all lifeforms, including bacteria (with very few exceptions) and humans. In man, iron deficiency is considered the most common form of malnutrition resulting in iron- deficiency anaemia (IDA) affecting some 2.4 million adults and ~2.3 million children in the UK alone. Those with IDA suffer from fatigue, poor concentration, weakened immunity, and poor performance at school and work – representing a major economic and societal burden. IDA is treated by oral iron supplements and incidence is reduced by iron fortification of food (e.g. white flour). However, iron supplements often cause undesirable gastrointestinal side-effects (nausea, constipation or diarrhoea). In addition, there is mounting experimental evidence demonstrating that the amount of iron in the diet influences the composition of the microbiota, with iron supplementation causing deleterious reductions in levels of beneficial commensals. Such changes are negative indicators of gut health. Indeed, extra iron provision in the diet can promote growth of pathogenic enterobacteria which may in turn provoke debilitating infectious diarrhoea. Currently, it is not clear how iron enhances the enterobacteria population and diminishes the protective resident microbiota, nor is it understood how dietary iron influences the gut microbiota population in general. However, it is quite likely that a major component of such iron-induced alterations in the microbiota is related to differences in the way in which the distinct types of bacteria within our gut respond to iron. 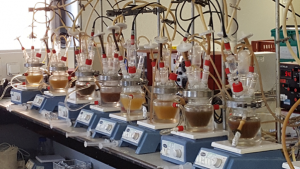 Unfortunately, this relationship between dietary iron, gut microbiota and health/disease remains little explored, and so the potential for positive manipulation of the gut microbiota through dietary-iron regime cannot yet be exploited to promote our health and combat disease. In this project, we will employ controlled in vitro models of our large intestine (where most of the gut microbiota reside) and human trials to investigate how the composition and metabolic activity of ourmicrobiota are influenced by iron, and the impact that this has on health-related outcomes. We will explore different iron sources as well as dietary components that enhance or decrease iron availability. The ability of prebiotics to reverse unfavourable iron-induced alterations in the gut microbiota will also be investigated. In addition, the impact of iron on the gut microbiota during weaning will be examined. In this way, we will shed new light on the relationship between our microbiota, and diet & health, allowing us to inform key interest groups such as nutritional scientists, the food & drink industry, government and the general public so that the effects of dietary iron on the status of our microbiota can be incorporated into current thinking to improve health.