Cloud base and LIDAR

Records of cloud base height are made using a Vaisala CL31 laser ceilometer, also known as a LIDAR (Light Detection And Ranging). 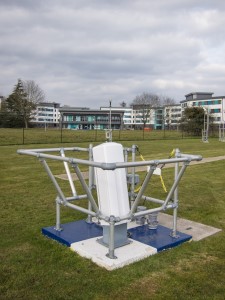 The Vaisala CL31 Ceilometer measures cloud height and vertical visibility using pulsed infrared (910 nm) diode laser LIDAR technology, where short, powerful laser pulses are sent out in a vertical or near-vertical direction. The reflection of light – backscatter – caused by haze, fog, mist, virga, precipitation, and clouds is measured as the laser pulses traverse the sky. The resulting backscatter profile, that is, the signal strength versus the height, is stored and processed and cloud bases are detected. Knowing the speed of light, the time delay between the launch of the laser pulse and the detection of the backscatter signal indicates the cloud base height. The unit is able to detect three cloud layers simultaneously. If the could base is obscured due to precipitation or ground-based fog, the unit reports vertical visibility. 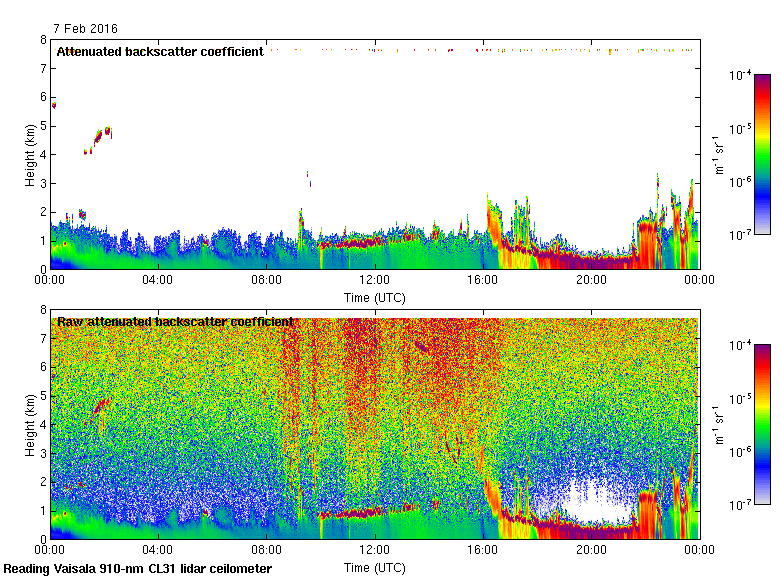 An example of attenuated and raw ceilometer output, for 7 February 2016. The day began bright with a mostly sunny morning, with only scattered cumulus clouds with cloud base around 950 metres. This was followed by a very rapid increase in altocumulus (medium-level cloud) from the south-west after 1230 UTC and a very rapid build in cirrostratus cloud (accompanied by a 22 ° halo) lowering into thick altostratus within the hour 14-15h – the upper cloud base can be seen to fall from around 7000 m about 1330 UTC to below 1000 m at 1630 UTC. Rainfall began at 1630, continuing throughout the evening under a low cloud base of stratus fractus. A cold front passage around 2145 UTC, and another at 2315 UTC, gave short bursts of very heavy rainfall and strong, squally winds, followed by a marked rise in the cloud base and a breakup of cloud.

The device software is designed to give the full backscatter profile, which can be accessed using the link below:

(Open Access article). Abstract: Ceilometer lidars are used for cloud base height detection, to probe aerosol layers in the atmosphere (e.g. detection of elevated layers of Saharan dust or volcanic ash), and to examine boundary layer dynamics. Sensor optics and acquisition algorithms can strongly influence the observed attenuated backscatter profiles; therefore, physical interpretation of the profiles requires careful application of corrections. This study addresses the widely deployed Vaisala CL31 ceilometer. Attenuated backscatter profiles are studied to evaluate the impact of both the hardware generation and firmware version. In response to this work and discussion within the CL31/TOPROF user community (TOPROF, European COST Action aiming to harmonise ground-based remote sensing networks across Europe), Vaisala released new firmware (versions 1.72 and 2.03) for the CL31 sensors. These firmware versions are tested against previous versions, showing that several artificial features introduced by the data processing have been removed. Hence, it is recommended to use this recent firmware for analysing attenuated backscatter profiles. To allow for consistent processing of historic data, correction procedures have been developed that account for artefacts detected in data collected with older firmware. Furthermore, a procedure is proposed to determine and account for the instrument-related background signal from electronic and optical components. This is necessary for using attenuated backscatter observations from any CL31 ceilometer. Recommendations are made for the processing of attenuated backscatter observed with Vaisala CL31 sensors, including the estimation of noise which is not provided in the standard CL31 output. After taking these aspects into account, attenuated backscatter profiles from Vaisala CL31 ceilometers are considered capable of providing valuable information for a range of applications including atmospheric boundary layer studies, detection of elevated aerosol layers, and model verification.