Brief details of measurements made are given in this section: more details are given under headings organised by parameter recorded. More detailed technical information and specifications for the sensors in use can usually be found in the manufacturer’s website links, which are given where possible. (Manufacturer-specific product information and links are given solely to provide additional details on the particular sensors in use at the observatory, and should not be inferred as commercial endorsement.) Photographs of the instrument and its siting are given where available. The period of record available is also given by element where known. Calibration details of individual sensors can be found in the ‘Calibration data’ tab at the end of this section, or on application to the department’s technicians.

More information on meteorological instruments and standard observing practices can be found in the following publications, copies of which are available in the department library:

There are also further details of certain instruments given in published papers using the data generated – see the Cited references tab for latest information.

There are two types of measurements made:

Currently the automatic sensors are polled and logged once per second using a Campbell Scientific CR9000X logger (Table 2). Data are available at 1 s resolution for research purposes, whilst standard ‘meteorological’ output consists of period averages of the polled values in compliance with World Meteorological Organization specifications – for example, wind speeds are normally quoted as 10 minute averages, and wind gusts as the highest 3 second running mean wind speed. Further details are given in Quantities and Units.

A separate self-contained automatic weather station operated by the Met Office was installed within the enclosure in August 2012; this description does not include this equipment. In addition, there are occasional experimental or test instruments located within the observatory which are not described here.

Because of differences in recording methods and instrumental response times, slight differences can occur between ‘climatological’ and ‘automatic’ records. The ‘climatological’ records are subject to quality-control measures and are normally regarded as the definitive value.

Period of record by element

Table 1 summarises the period of record by main element; in all cases, records were made at London Road until 1967 and at Whiteknights from 1968 to date. In a few instances, missing data or incorrect values have been estimated using data from other local observations. The records are not completely homogeneous, in that the current Whiteknights site has less urban influence, and is 20 m higher, than the London Road site and therefore slightly cooler, although careful comparisons have shown that there is no significant difference in the precipitation record.

The full daily observation database and scanned registers are available for research on application to the department; see also One Hundred Years of Reading Weather by Roger Brugge and Stephen Burt, published in 2015. In most cases, a few minor gaps have been estimated from other local observations.

TABLE 1 – Period of record by element

Thinking about climate science during #BSW20? Why not send a question for our @IPCC_CH experts to answer – #RdgCliSciAMA?

Hello teachers, welcome back from half-term! Do you or your students have a question about climate science? Join our Climate Science AMA on March 13th by sending questions using #RdgCliSciAMA with @IPCC_CH authors @rpallanuk, Nicolas Bellouin, Bill Collins and @LJ_Wilcox #BSW20

Going through a load of my old stuff and came across this beauty. I was 16 and applying to do my A-levels @LR6FC. I had my career path already well set out…🤓

My love of meteorology hasn’t wavered in the 23yrs since 😉😂 https://t.co/N7wl1NrOml 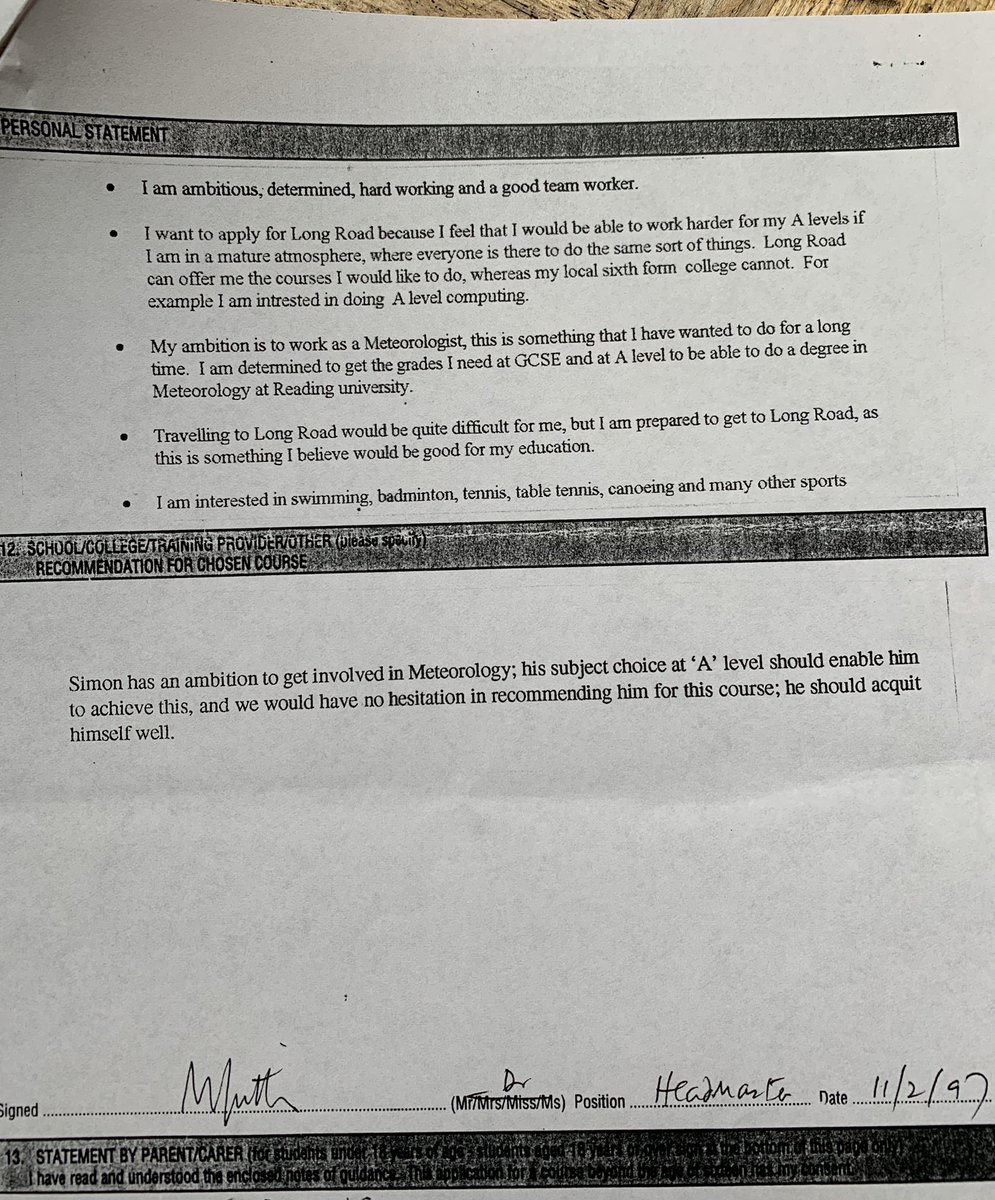