Manual records of daily sunshine duration are derived from the chart records of a Campbell-Stokes sunshine recorder (Photograph 1), which is mounted on the southern side of the fourth-storey roof of the Meteorology building, at approximately 25 metres above ground level. The chart is changed daily shortly before 0900 UTC (any sunshine from dawn to the time the chart was changed are counted to the day the chart was changed, otherwise the record is credited to the previous ‘civil’ day, i.e. 0000-2359 UTC). The Campbell-Stokes instrument was originally operated on the Chemistry Building roof, and then at the Observatory site until about 2005 before theft of the instrument necessitated selection of a more secure location. Unfortunately, in its current position it is increasingly shadowed by trees to the south-east on winter mornings, particularly near the winter solstice. 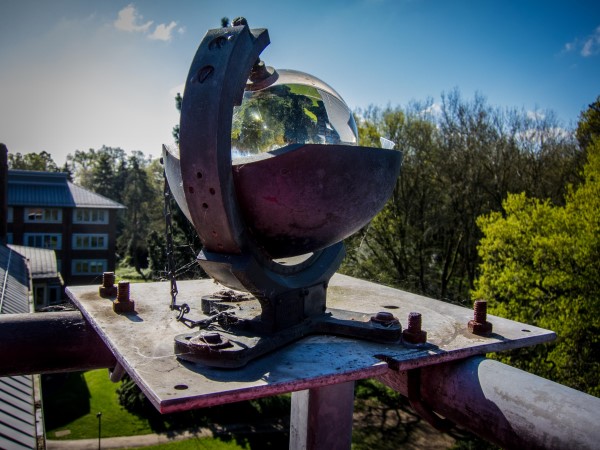 Automatic observations of sunshine duration are obtained from a Kipp & Zonen CSD1 sunshine sensor located within the observatory enclosure. This unit contains three calibrated photo diodes, arranged such that when the Sun is shining a differential voltage is generated across the photo diode circuit (because at least one of the diodes will be in shadow). The threshold for ‘sunshine/no sunshine’ is set by the manufacturer to be close to the World Meteorological Organization definition of ‘sunshine’, namely ‘the duration of the period for which the direct solar irradiance exceeds 120 W/m²’. This sensor is polled once per second using the Campbell Scientific CR9000X logger. Standard ‘meteorological’ output consists of totals – seconds, minutes or hours of sunshine as appropriate – over various periods, usually hourly and daily. As this instrument differs in both threshold and response time to the traditional Campbell-Stokes sunshine recorder, considerable differences between the two instruments can sometimes arise. The Kipp & Zonen sensor was sited towards the south-east of the observatory at about 1.5 m above ground level from 2013 until 6 July 2016, when it was relocated to the 10 m anemometer mast in the centre of the observatory enclosure, at about 10 m above ground level; this position offers a more open horizon than the previous site, which remained in shadow from a building to the south until mid-morning in midwinter, and the record was accordingly low at that time of year. 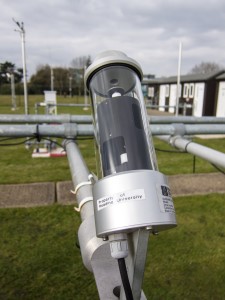 Three measurements of solar radiation – global, direct and diffuse – are made within the enclosure, together with records of short- and long-wave fluxes.

Two Kipp & Zonen CM11 pyranometers and a Kipp & Zonen CHP1 pyrheliometer are mounted on an electrically-driven solar tracker. To measure global solar irradiance, one pyranometer remains exposed to sunshine throughout the day, while the sensor area of a second identical pyranometer is kept in permanent shadow by a small sphere approximately the angular size of the solar disk, kept in alignment with the solar disk by the solar tracker mechanism. The sensor thus measures ‘diffuse solar radiation’. (Prior to the installation of the solar tracker, a ‘shadow band’ was used to obscure the shaded pyranometer. A correction is needed to allow for the diffuse radiation obscured by the shadow band itself, which was not applied to the automatic data obtained by corrdisp or Fidas1 and 2.)

The third instrument mounted on the solar tracker is the Kipp & Zonen CHP1 pyrheliometer, which has a narrow aperture (about 5 degrees) and is kept aligned normal to the solar beam by the solar tracker, thereby providing a measurement of direct incoming solar radiation. (An alternative approach for obtaining the direct solar radiation is by subtracting ‘diffuse’ from ‘global’.). 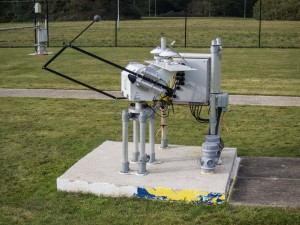 The Kipp & Zonen solar radiation instruments located within the Atmospheric Observatory, photographed March 2016. Nearest the camera and pointing directly at the Sun is the CHP1 pyrheliometer, above this are two horizontally-mounted CM11 pyranometers, one measuring global solar radiation and the other (partially shaded by the tracking ball) measuring diffuse solar radiation only. Photograph Copyright © Stephen Burt. 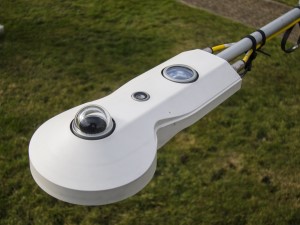 None of our current radiometers have been calibrated or returned to the manufacturer since they were purchased, but see ‘Historical metadata’ below for details of in-situ cross calibration tests undertaken since 1996.

Daily duration of sunshine (civil day) are available from the Campbell-Stokes sunshine recorder from January 1956 to date, and from the Kipp & Zonen CSD1 sunshine sensor from January 2009 to date. Records of global solar radiation commenced January 1968, but with gaps (approximately 75% record since 1968); see historical metadata below for details of instruments in use over this period.

Operational notes or changes (since January 2016):

Historical pyranometer metadata (prior to January 2016):

The two Kipp and Zonen CM5 pyranometers used for the Sd and Sg measurements on corrdisp were originally supplied to the Meteorology Department in 1969. It is understood that they were hardly used until 1996, and deployed only occasionally for short experiments. The original manufacturer’s calibration certificates are dated 20 June 1969 (CM5 serial number 690220; Sg) and 5 December 1969 (serial number 690217; Sd). The Department maintained a further CM5 solarimeter (serial number 721590) for use solely as a laboratory reference instrument. (The reference CM5 instrument was calibrated on 18 August 1974, and subsequently re-calibrated by the UK Met Office on 8 August 1989.) The two CM5 pyranometers were intermittently compared against the reference CM5 instrument, but no substantial differences are recorded. The last such comparison was made on 3 July 1995.

At the outset of automatic measurements in 1996, the original 1969 calibrations were used. Checks were then made at least annually of the Sg and Sd values on a totally overcast day. Sg and Sd were plotted against each other, for which the gradients were always within 7% of 1:1, with the median value of the comparisons within 3% of 1:1. Occasional direct beam checks were also made using a Linke-Fuessner pyrheliometer, on clear days around noon. New calibrations of the long-term instruments were obtained when additional radiation instruments were installed, notably a new CNR1 pyrradiometer in 2002, and two unused CM11 pyranometers in 2005. Results of sensitivity comparisons are given in Table A1.

Table A1. Comparison of the long-term Sg and Sd instruments with newer instruments

In addition, on 7 September 2005, the CNR1’s short wave sensor was compared with the CM11 Sg reference pyranometer, which yielded a 1.000 sensitivity. This confirmed the long term stability of the CM11 calibration. This CM11 was used to obtain a calibration for the Sg CM5, which was applied retrospectively to all the Sg measurements obtained since 1996. (A further correction is needed for a gain change of ×500 to ×400 in the Sg signal conditioning amplifier, on 27 July 1997.) No change was made to the Sd data, as the calibration accuracy of the CM11 comparison instrument is similar to that of the CM5. Better long-term stability of the Sd instrument can probably be assumed, as the shadow band is likely to reduce long-term solar degradation of the thermopile surface by preventing exposure to the direct beam.