Wind speed – three Vector Instruments A100LM anemometers, mounted at 2 m, 5m and 10 m above ground, provide wind speed readings using a low power pulsed output transducer. All three are polled once per second by the Campbell Scientific CR9000X logger. Standard ‘meteorological’ output consists of (i) ‘gust’ speeds – where the gust is defined as the highest running 3 s mean speed, and (ii) ‘mean’ speeds – which are normally 10 minute averages. The mean and gust derivations are in accordance with World Meteorological Organization and International Civil Aviation Organization specifications.

‘Climatological’ values of wind speed – mean speeds and maximum gust – normally refer to the ‘civil day’ (midnight to midnight UTC), and are currently derived from the logged values of these anemometers (prior to 1996 the ‘run of wind’ was from a cup-counter anemometer). The standard height for wind measurements is 10 m above ground. 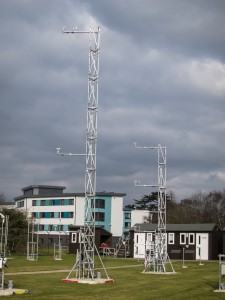 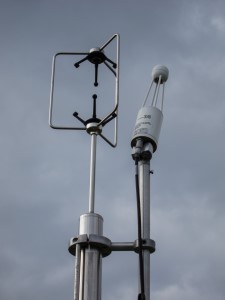 (Above) The Gill sonic anemometer (left of image) mounted alongside the Licor trace gas analyser (right), both located within the Atmospheric Observatory, and photographed March 2016. Photograph Copyright © Stephen Burt.

Daily mean wind speed and ‘maximum gust’ values are available from January 1968. There are gaps in the record, particularly between July 2014 and spring 2015 when no values of wind speed or direction at 10 m were available owing to replacement of the anemometer mast: records from the anemometer and wind vane at 5 m were temporarily substituted (winds at 10 m are, on average, about 10% stronger than at 5 m). Automatic (logged sub-daily) wind speed and direction records at 10 m are available from 1996 to date, although with gaps in the record.