Responsible tax is an outcome of being a responsible business and so is intertwined with how the business operates rather than being a separate “specialist” endeavour. Responsible business, and responsible tax, is not about certifications or rankings in league tables, although they may be legitimate indicators or outcomes. Rather, it is about thinking and acting responsibly. That requires a certain mindset about business – including its role in society and its responsibility towards the people and communities that business impacts.

Crucially, responsible business depends on whether the business is regarded as being remote from both society and people and joined only by contract and legality, or whether it is part of society and in relationship with the communities it touches and the people it is responsible for.

The remote contractual approach suggests a certain independence. Business can fend for itself and society can fend for itself subject to legitimate contracts and transactions between the two. A relationship approach suggests more of an interdependence. The well-being of one impacts on the well-being of the other, which suggests that there is an expectation to go beyond contract to aid each other’s well-being. It is for each business to decide what stance it takes, although ultimately it is for society to judge whether that stance is legitimate even if it is legal.

Businesses should publish the beliefs that underpin their tax strategy

Many businesses have, and publish, a tax strategy. I would suggest that they should also have, and publish, the beliefs that underpin that tax strategy. This could cover two areas: first, its view of its relationship with society (contractual or relational) and second, what they see as the purpose of their tax contribution (part of the contractual licence to operate or a contribution to a common good that they participate in – which is a natural outcome of any healthy relationship). This can then be judged for consistency with any broader representations the business makes around being a responsible business and also against their actions and behaviours in relation to their tax affairs and payments.
The current health and economic crisis has put a spotlight on the relationships between business and society. The support for business from governments and the support for society from many businesses suggests that the relationship goes beyond contract and there is an implicit understanding of interdependence. The crisis has also exposed poor behaviour such as fraudulent claims for government support and some businesses making themselves unnecessarily dependent on government support by financial arrangements that undermined their ability to “fend for themselves”. Also, it has exposed the frailty of the relationships between government and society as politicians govern and citizens (including businesses) bear the consequences and seek government support to mitigate those consequences. This suggests we have examples of both relational/ interdependent and remote/ contractual thinking. Now is an ideal time to expose these two modes of thinking and seek a consistency of approach going forward.

The current crisis shows the interdependence of business and society

My own view is that mapping a way out of the current crisis could be a time to both recognise the interdependence of business and society and to ask businesses and society (in terms of societal institutions such as local and national political parties and societal actors such as community groups and larger NGO’s) to acknowledge that interdependence and their joint responsibility for the well-being of the people they impact. Surely now is the time to judge legitimacy of actions in terms of genuine contribution to a common good rather than judge simply legality of actions in terms of avoiding punishment for legal but questionable actions and outcomes. And this standard applies to policy makers and stewards of spending funded by taxes as well as the taxpayers such as business.

For business this means a review of what they see as their role in society, what role tax plays and how their behaviour is consistent with that. It is not simply how much tax they pay but the rationale behind that amount. This is not about paying more necessarily but a consistency between the amount paid and their approach.

A thoughtful review of the interdependence with society includes recognition of business’s important role as unpaid administrators of the tax system and creators of value that enable contributions to the tax system from the business, employees, suppliers and customers, but also what they benefit from public spending on – education, infrastructure, international treaties, primary publicly funded research and government procurement.

I believe that publishing that viewpoint as a context to their tax strategy would help business be both legal and legitimate, in the sense of a minimum standard of compliance with the law but also seeking legitimacy by providing their viewpoint around their tax behaviours and contributions in the context of assertions of responsible business behaviour. 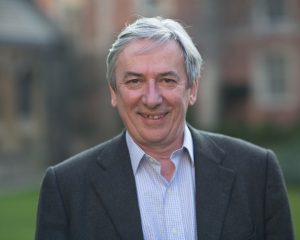 Loughlin Hickey is a co-founder and a trustee of A Blueprint for Better Business. Prior to that he was a tax specialist at global accounting firm KPMG. For the last six years of his career at KPMG he was Global Head of Tax and member of the Global Executive Team.