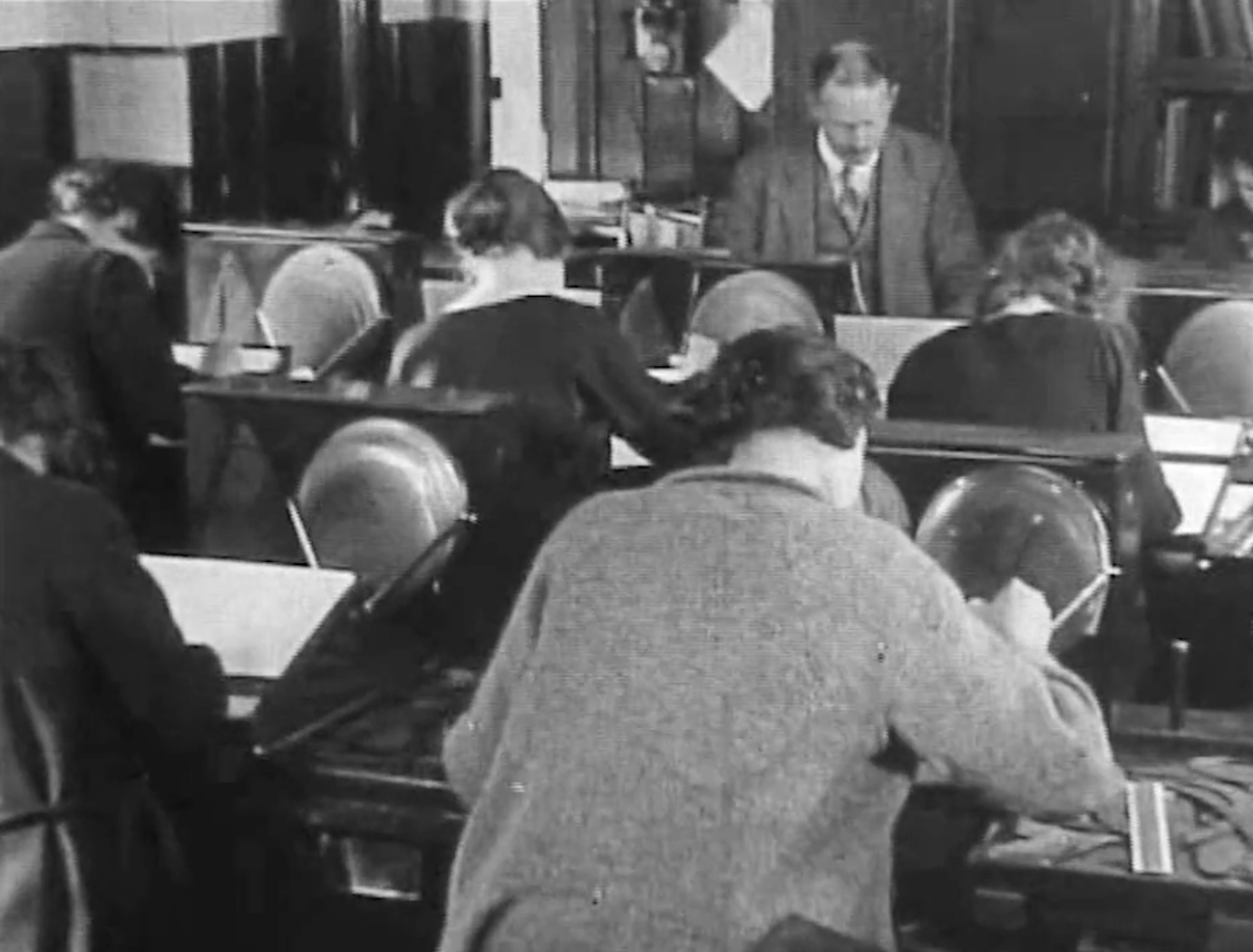 This silent film from 1925 provides a lively and informative insight into the life of employees at the Monotype Works in Salfords. The first part of the film walks us through the various steps involved in making a Monotype machine, and shows the matrix-making process. It subsequently shows everyday scenes, such as employees having lunch at the canteen, and leaving the Works (either riding their bicycle, or walking) at the end of the day. The last part of the film is dedicated to a visit of the Duke of York (Prince Albert, later known as George VI) to Monotype.

As part of our research it is particularly interesting to note that, while the first section of the film dedicated to machine-making only shows men at work, the letter-drawing and matrix-making departments (shown at 17’30) seem to be almost exclusively populated by women. The three sections named in the film titles as ‘Type designing’, ‘Punch cutting’ and ‘Matrix making’ present women at the drawing board, producing wax and copper patterns, operating the punch cutting machine, justifying the matrices and checking their depth, and many other related tasks. The Type Drawing Office (designated in the film as a type design entity, rather than a technical one) features six women leaning on their rotating drawing board, and facing two other persons (a man and a women). According to Dr. Sallie Morris’ research, these could be Fritz Steltzer, Head of the TDO at the time, and Dora Pritchett, one of its earliest staff. Next to each drawing clerk, a box filled with rulers and French curves enabled them to draw consistent and accurate letterforms at a size of 10-inch (which is why the drawings, produced as pencilled outline and in reversed, were known as ’10-inch drawings’). While TDO staff are wearing what appears to be dark cardigans, women working in the punchcutting and punch justifying departments are wearing white coats and protective hats.

Later in the video, a view of the canteen shows men and women eating their lunch either in separate rooms, or at different times (as part of the interviews we carried out, former Monotype staff had mentioned segregated canteens, something this video thus confirms). The atmosphere appears very lively, with women of various ages sitting around the table, smiling and chatting. Another section of the film (at 37’54) shows the Duke of York leaving the Works after his visit. As he enters his car and drives off, many women wave excitingly and run after his vehicle, before heading back to work. A lively overview of life at Monotype for its female employees.