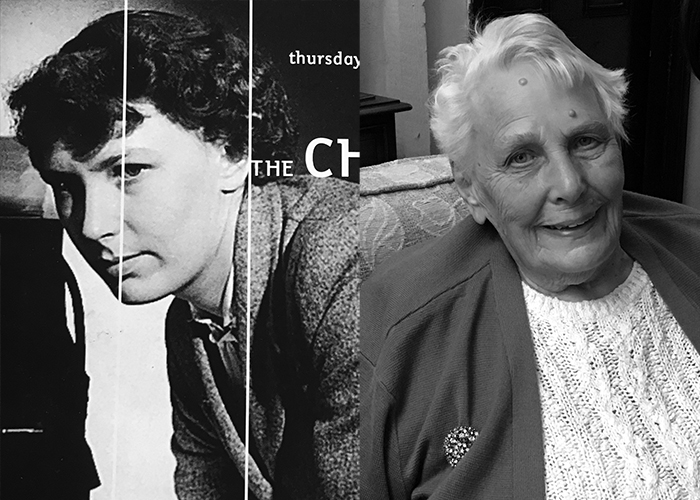 In July 2018 we had the privilege to travel to North Wales to interview two former and iconic members of the Monotype Drawing Office, Patricia and David Saunders.

Having graduated from Reigate County School for girls – a grammar school – Patricia (b.1933) joined Monotype’s Drawing Office in 1951 as a drawing clerk, alongside fellow school graduates and after two years of work experience in a bookshop.

Patricia was trained by Dora Laing, a long-standing member of the TDO whose notebooks have been very valuable to our research. “We were not encouraged to know names or history of fonts – it was all numbers. But we were expected to design any missing characters [..]. We also did some exotics [i.e. non-Latin typefaces].” Patricia and David married in Oct. 1959 and Patricia left Monotype the following year to have a family and raise their two sons. In that respect, her experience is very similar to that of many women who joined Monotype after graduating from the local Grammar School, and who worked in the TDO for a few years before leaving to have a family. What differs in Patricia’s case, however, is that she eventually came back to Monotype (after a 22-year hiatus) in 1982. By the time she joined the company again, the industry had dramatically changed and Patricia became involved with digital type. She remained a vital member of the Drawing Office until her retirement in 1993.

Upon her return at Monotype, Patricia worked with Robin Nicholas on adapting a number of typefaces to the Lasercomp (including Van Dijk and Centaur). She collaborated with Robin on the design of Arial, and designed typefaces such as Columbus and Monotype Corsiva (for Microsoft). She was also involved in the design of Pastonchi.

Patricia’s perspective on her status, as a woman who trained in the Drawing Office, was highly enlightening. She mentioned, for instance, that women were offered supervisory roles but refused to take them “because it wasn’t a woman’s job”; she also explained how, after her return in the 1980s, she felt the need to fight for equal pay and obtain similar status as some of her fellow male colleagues.

Part of David Saunders’ experience at Monotype was previously recounted in two articles he authored for the Monotype Recorder:

Looking back, interviewing Patricia and David Saunders was extremely informative and, undoubtedly, one of the early milestones in our research project. Very few ex-Monotype employees going back to that period are still alive and able to share their story. Our thanks go to Patricia and David for their hospitality and generous accounts, and to Robin Nicholas as well as Christopher Burke for enabling us to contact them.