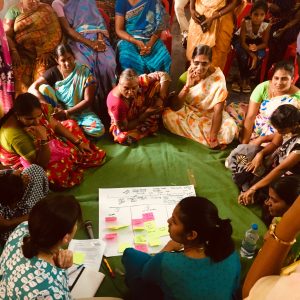 Jayna George is a Young Professionalist at  ZBNF in Andhra Pradesh. She received her Bachelor’s in Mass Communication & Journalism in 2015 from Loyola Academy and her PG Diploma in Rural Development and Management from National Institute Rural Development & Panchayati Raj in India. She previously worked in the National Rurban Mission with the Himachal Pradesh government in India.  She loves travelling and taking photographs.

APCNF program and its vision to convert farmers to practice natural farming is the future for the world. The initial stage of the program was built and expanded through the extension methods in the field level through champion farmers, farming fellows and lead farmers. The institution building mechanism focused on the Women Self Help groups as point of communication for the implementation of Zero Budget Natural Farming.

To analyze the impact of WSHG, myself with a small team of Natural Farming Fellows were introduced to the team from University of Reading( Social Science) The participatory photography  was one of the methods found to analyze this impact using certain research methods which was very new to me and my team.

The training from the team gave a picture on how it is to be implemented in the field with the WSHG groups who were of diverse backgrounds, few literate, mostly illiterate, not very exposed to the outside world, few very active and few had experience in engaging with people outside their village and districts.

The participatory method, to make it successfully engaged and involved by the women, cameras were the effective tool which brought interest among them. On the very first meeting, a selective group of SHG were asked questions on their opinions on different issues in their village – agriculture, community, farmers, crops, water, life style, education, climate, etc related. This first meeting was to have an interaction with women. Our Natural Farming Fellows were to take this group ahead for the following next sessions. They had sessions beginning with camera training, followed by discussion with the groups on various topics that the women found interesting to discuss about.

These discussions could lead to any areas depending on the women – It started with Natural Farming related topics to health, to saving money, cultural and festive and stories of villages and many more with pictures that the women themselves had taken. These were certain ways for the coordinator to understand the areas where the women were heading to in every meeting.

Every woman had the chance to present their points through photographs and a small write up on their thoughts about it. The photographs were completely taken from the perspective of the women.

While I was looking at the captured pictures after 5-6 meetings, we observed different patterns of pictures captured by each women, this started giving us an idea and perspective of these women and stories of women which was expressed in the photographs. Women spoke about various cultures in the photographs, expressed about their happiness, conveyed messages about early child marriages, their interest for their future, their farm and agriculture and a lot of living a healthy life.