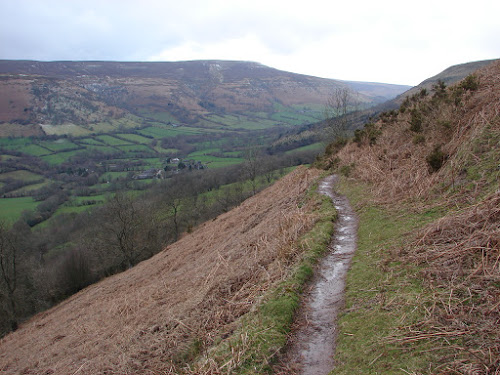 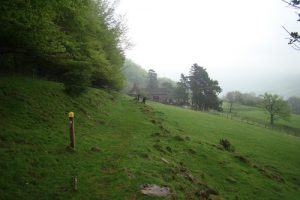 For a while now I have been contemplating researching a comprehensive landscape history of paths, or at least the pathways of Britain. Paths, such an intrinsic topographical element, both a symbolic and practical medium for accessing and moving through much of the landscape, really should have their own history told. Somewhat surprisingly, no-one seems to have done this yet in a holistic way (though there is, of course, a vast array of books, pamphlets and web pages devoted to walking and related experiences, to describing routes through the landscape, and to recording often locally specific paths, tracks and byways). What lies below our feet – the actual path – often seems to be curiously incidental to these narratives, perhaps taken for granted (even, dare I say it, by academic specialists, psycho-geographers and new nature writers).

These musings have been honed into a research proposal so that I can hawk this around for funding (so far unsuccessfully!) or undertake the project independently. I’m beginning to think that the latter pathway is more likely and has many advantages, less constraints, and allows a wider ranging, should I be able to find the time to carry it out (and walk the miles). Anyway, here is what I have in mind. If anyone has any comments or suggestions then please do get in touch. It is written as an academic research proposal so please bear that in mind if you slightly loose the will to live before reaching the end.

Footpaths are not simply conduits for moving through the landscape: from prehistory to the present day, they have played a fundamental role in shaping both the land and the people who have walked them. Each pathway has a topography and social history of its own which tells the story of its original purpose and subsequent use. And yet, paths and their infrastructure – and the meanings which have become associated with them – have seldom featured in the historiography of the British landscape. This research will fill that gap.

Defining a path as a route used for non-vehicular passage away from the main arteries of commerce and travel, this project will examine a variety of different types of British pathway. These include routes used for everyday local movement and connection alongside long-distance routes such as pilgrim ways, drovers’ roads, and recreational trails. Pathways with special functions, for instance industrial tracks, will be studied together with both formal and informal circuits of protest and celebration. In terms of geographical and chronological scale, investigation will concentrate on a British context from the early medieval to the present day, drawing on comparisons and evidence from further afield and prehistory where necessary. While recognising that every path is the unique product of its own history, this research will explore a number of themes relevant to all. Temporal and spatial consideration will be given to the permanence or ephemerality of paths, and their stability or instability as landscape features.

The research will also address such issues as the extent to which pathway origins can be traced, and how their courses, material fabric, names, and purposes might have changed over time. It will examine pathways as networks of movement and connection, and how patterns of footpaths have formed in different regions and landscape settings, and at different times. It will look to explain why pathways take different physical forms. It will examine how people have understood paths whether as public spaces or common rights of way, or as symbols of social memory and community custom, markers of boundaries, and channels for dissent.

Complementing these historical perspectives, the project will also address the part paths play in the contemporary landscape: how are they now managed, to what extent are they at risk or under-appreciated as a public good, and what role might they play in a more sustainable society? 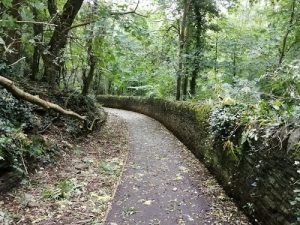 The history, physical form, and utility of routeways has been addressed to some extent in scholarly discourse (Allen and Evans, 2016; Hindle, 1991; Morriss, 2005; Taylor, 1979). The substantial corpus of research accumulated for other elements of the historic landscape, such as fortifications, religious and ritual sites, settlements and field systems, is, however, lacking for the pathways that connect these spaces. What has been published has tended to focus less on paths and walking, more on roads and highways as networks for elite movement, trade, and communication: for instance, the outputs of the recently concluded Travel and Communication in Anglo-Saxon England project (Brookes et al, 2019). Moreover, though W.G. Hoskins’ ‘mud on your boots’ ethos has permeated the empirical landscape archaeology and history tradition in Britain, the paths used to explore and record the historic environment (and walking as a fieldwork technique, beyond the structured practice of ‘field walking’ to identify artefact scatters) are generally overlooked, for instance, in the fieldwork guides of Brown, 1987 and Muir, 2000.

Prehistorians, anthropologists and cultural geographers have been more interested in paths and walking than those examining trackways and footpaths in the historic period (Bell, 2020; Leary, 2014; Wylie, 2005). Mobility through the landscape has appeared as a key theme, though phenomenological approaches based on inhabiting the landscape, and considerations of flows of people and objects have left surprisingly little space for examining the materiality of paths and tracks (Gibson et al, 2019; Ingold, 2011; Sen and Johung, 2016; Tilley and Cameron-Daum, 2017).

A slew of popular yet highly literate narratives around path-making and -taking (Macfarlane, 2012; Solnit, 2002), together with psycho-geographical tracts constructed around novel walking practice, often in urban, contested or prohibited settings (Papadimitriou, 2003; Sinclair, 2002), provide further contemporary context. Wider public and policy interest in landscape responses to environmental and climate change such as future farming practices, rewilding, and flood control are also of relevance here, not least because walking footpaths remains one of Britain’s most popular outdoor pursuits, valued for cementing a sense of place as well as its health and well-being benefits (de Moor, 2013; Ramblers, 2010).

This research will draw judiciously from the various methodological and theoretical approaches taken in these previous studies of pathways, extending them further and applying them in new contexts. 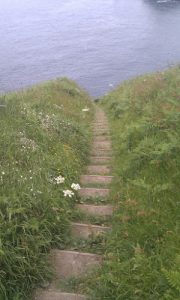 Six case studies will anchor the research, chosen to represent a diversity of topography, geography, and history: a deep survey of specific localised footpath networks at the scale of the historic parish or group of parishes (as long-established territorial units). Close study of medieval tracks associated with monasteries in south-east Wales has already tested the feasibility of this approach (Procter, 2019). A matrix of criteria will be used to identify the case study parishes, taking account of the existing path network, and richness of historic mapping and primary sources. Representation from across England, Scotland and Wales and a range of landscape settings, such as heavily wooded, upland, low-lying, industrial and urban will also be ensured. Case study selection will precede the main research study. The Cotswold scarp of Gloucestershire has been provisionally identified as the location for an example of ‘ancient’ countryside and a parish characterised by planned enclosure will be selected in the Feldon area of south Warwickshire. In addition, a study of Offa’s Dyke Long Distance Trail will focus on contemporary trail-making and recreational utility. 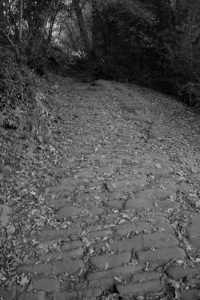 Building on my own doctoral research practice, an interdisciplinary methodology will integrate topographical, archaeological, cartographic, etymological and historical evidence. Applied experience and knowledge of working as a Public Rights of Way Officer and leading volunteer parties maintaining National Park footpaths will supplement academic research skills. The archaeology and physical characteristics of the paths in each case study area will be examined in the field to establish geographical patterns and networks, their fabric and form, function and evolution, and classify related landscape features, such as boundaries, stiles, and bridges. Public rights of way, permissive routes, and unofficial and disused tracks will be extensively walked, photographed and recorded, harnessing the assistance of local history and walking groups. Key exemplars will be subjected to more intensive investigation through measured survey. This field evidence will be combined with an analysis of references to case study footpaths in existing data sets (HERs, archaeological reports, etc.), and primary and secondary sources held within local and national archives (including estate, enclosure and tithe maps, legal cases relating to rights of way, highway commissioners reports, and manor court records and surveys). Corroboration will also be provided from aerial photography, satellite imagery, LiDAR, and other geo-spatial resources. These data will be combined, analysed and where appropriate modelled in GIS; and the research outcomes illuminated by a set of GIS-based maps of the case study path networks, written and photographic commentaries of selected walks, and detailed plans of example path types.

Archival sources, such as early medieval charters and later medieval court rolls, references to perambulations and ‘Beating the Bounds’ of parish boundaries, will be interrogated alongside local legend and folk tales, early modern chorographies, and literary and artistic representations to chronicle how the case study pathways have been experienced and perceived through time. An indication of contemporary attitudes to the footpath network will be highlighted through small-scale qualitative on-line, social media, and in-person survey of users and other stakeholders within the case study areas, complemented by analysis of quantitative data-sets available from bodies such as National Parks, The Ramblers and National Trust. 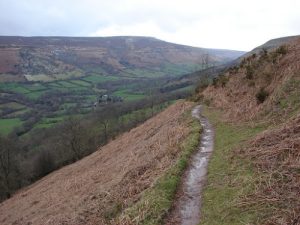 The primary output from the project will be a monograph or book. Detailed, place-specific spatial and temporal descriptions of the origins, and material and cultural evolution of the case study pathways will inform an overarching landscape history of British footpaths. There are currently no titles that cover this territory. Additionally, two articles on elements of the project (for example, the walking fieldwork practice and a case study) will be submitted to peer-reviewed journals such as Landscapes, Landscape Research, and others across related fields including archaeology, cultural geography, history, and literary studies. The emerging research will also be disseminated through conference papers (particularly targeted at conferences with an inter-disciplinary landscape focus).

Wider public engagement will be threefold. First, a dedicated blog and social media profile, highlighting interactive maps of the case study path networks, walk commentaries and suggested routes, and enabling interaction with local interest groups within the case study areas. Secondly, such groups as well as cultural festivals and events with a landscape, walking, nature, or travel writing component will be approached as platforms for talks (where possible combined with themed guided walks). Finally, several short-form articles will be submitted to relevant magazines, websites, and blogs with both niche and wider audiences outside of academia, ranging from ‘new nature writing’ and psycho-geography to walking and outdoor titles.

Brown, A (1987) Fieldwork for Archaeologists and Local Historians (London: Batsford).

Tilley, C and Cameron-Daum, K (2017) An Anthropology of Landscape: The Extraordinary in the Ordinary (London: UCL Press).

Wylie, J (2005) ‘A Single Days Walking: Narrating Self and Landscape on the South West Coast Path’, Transaction of the Institute of British Geographers, 30, 234-47

Walking back through time: a landscape history of pathways was originally published on the Landscapism blog and is reposted here with kind permission of the author.