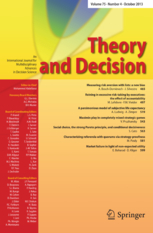 Steven Bosworth has had a paper accepted by Theory and Decision, entitled "Motives and comprehension in a public goods game with induced emotions".

Abstract: This study analyses the sensitivity of public goods contributions through the lens of psychological motives. We report the results of a public goods experiment in which subjects were induced with the motives of care and anger through autobiographical recall. Subjects' preferences, beliefs, and perceptions under each motive are compared with those of subjects experiencing a neutral autobiographical recall control condition. We find, but only for those subjects with the highest comprehension of the game, that care elicits significantly higher contributions than anger, with the control treatment in between. This positive influence of the care motive on unconditional giving is accounted for partly by preferences for giving and partly by beliefs concerning greater contributions by others. Anger also affects attention to own and other's payoffs (measured by mouse tracking) and perceptions of the game's incentive structure (cooperative or competitive).