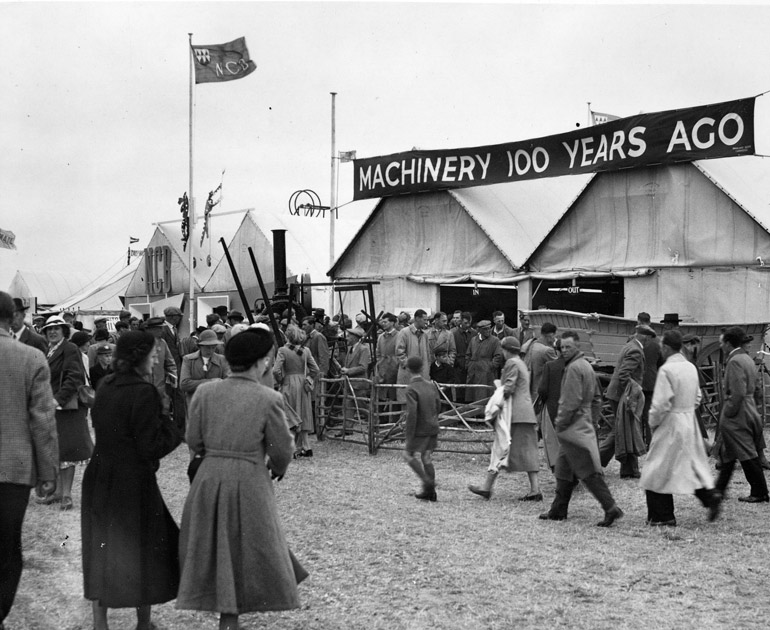 In this blog post Dr Ollie Douglas, Curator of Collections at the Museum of English Rural Life (The MERL), considers the intertwining history of international development and the creation of an agricultural collection at the University of Reading. He asks whether it is time for the Museum to acknowledge its own colonial legacies, to think about its holdings from a different perspective, and to engage more meaningfully with farming beyond England.

The MERL emerged in 1951, at a time defined in the popular imagination as one of changing global relations, when modern ideas and technologies were being rapidly adopted and accepted. From the 1950s onwards the language of colonial administration began to concede slowly to the discourse of ‘international development’, with ongoing talk of Empire giving way increasingly to discussions of ‘developing nations’, and nationalist imperialisms morphing into discussions of ‘world trade’. Behind the façade of this shifting narrative there was as much continuity as there was change and as much interest in what had gone before as there was in what might come to be.

The Festival of Britain – a celebration now foregrounded in displays and collections at The MERL – may be taken to exemplify this moment but more critical considerations of its content and motivations serve to highlight the prevalence of global inequality in its narrative. The event was inward-looking at a time of great global change, and shamelessly nationalist at a time when so many postcolonial countries were taking their first steps towards independent statehood. This stylish and well-designed image of mid-century modernity concealed the self-serving character of development practice and the persistent advisory role of the colonial office.

The University of Reading was granted its own charter in 1926, releasing it from serving as a collegiate extension of the University of Oxford. By the time the Second World War broke out this newly independent institution had barely flexed its muscles. However, in the post-war period it would establish itself in substantial ways: a new campus at Whiteknights; a new ethos of progressive change; a new breadth of scholarly practice. At the heart of all these new departures, agriculture remained a key driving force and, as is so often the case, the endeavour of thinking into the future fostered interest in as well as nostalgia for the past.

Experts in agricultural economics and mechanisation looked to history to help define and deliver productive change. Amongst them a lecturer in agricultural technologies, John Higgs, contributed towards the ongoing advisory literature of the colonial office. Here the subtext was one of agricultural improvement, whereby the global south was expected to accept the farming ideals of the global north and, as one such report noted, such ‘improvements could be introduced more quickly if mechanisation was used as a “stalking horse”.’ Here hidden intentions were acknowledged explicitly, all in the package of a suitable animal metaphor.

The MERL was born into this linear and limited conception of the modern world. It had a geographical and thematic focus that was similarly fixed and narrow, and John Higgs at the helm as its first Keeper. This museological project highlighted the tensions of a contracting colonial influence. As others have noted elsewhere, the ambitions of a Greater Britain became increasingly defined against a history of little England. The future of farming across the former imperial global south was framed in textbooks and field experiments by educators both in and from the global north. The very fact that The MERL’s nascent collection was limited to the national boundary and took the story of English agriculture as its pedagogic backbone illustrates the extent to which it was actually part and parcel of this unspoken blueprint of neo-colonial imposition.

In the same mid-century period during which the Museum gathered its first objects, the agricultural academy at Reading was also striding forward confidently, pioneering new directions in rural education. No longer just an extension itself but a generator of new outreach services, it marked this fresh route with new courses and new approaches to old. In 1956, Hugh Bunting was appointed to the inaugural Chair of Agricultural Botany. Bunting was to some extent tainted by his scientific association with the disastrous East Africa Groundnut Scheme. Arguably the single largest colonial failure of British agricultural policy, this resulted in ill-advised attempts to cultivate peanuts across vast swathes of Tanganyika (present-day Tanzania). Fault for its collapse lay largely, of course, with policies and targets set in London and Bunting was himself as much a critic and predictor of its inevitable demise as a participant in its implementation. Nevertheless, from its initial stages in 1947, through to its eventual closure in 1951, it was a blot on an otherwise highly accomplished career.

Bunting brought with him great expertise in overseas agriculture. A Reading previously aligned with the colonial epicentre of Oxford soon became a pipeline for agricultural extension in its own right, with many of his students aspiring to colonial careers. Just as Bunting began to shape the new direction of agricultural teaching at Reading, Higgs moved on, and the narrative of The MERL shifted again. In the later decades of the twentieth century, machinery models once used as props when Higgs and others taught students about the agricultural past, were consigned to the Museum’s collection. Farm education focussed less and less on what had gone before and more and more on the future. At the same time, the Museum stepped away from its early links to international and agricultural development and became further entrenched in insular ideas about the English rural past.

Fast forward seven decades and our colleagues in the School of Agriculture, Policy and Development are beginning to reframe the curricula of international and agricultural development, examining reading lists and redefining teaching from a more self-critical and decolonial standpoint. And, the more we peel back the layers of The MERL’s institutional history, the more we realise that The MERL also has a great deal of work to do to examine its ongoing role in favouring particular Eurocentric narratives from the global farming past.

The decision made in the early 1950s to exclude artefacts and histories of colonial and overseas agriculture from The MERL means we may not find ourselves unpicking the complexities of acquisitions made as a consequence of violent or oppressive rule. However, the institutional history of the Museum remains far from neutral and is not immune from the implications of decolonial thought and redress. The MERL’s collections harbour the ghosts of this unequal history and have rarely been examined from such a perspective. Furthermore, the very absence of objects from outside England speaks volumes and raises urgent questions about The MERL’s role historically, and what its role should be now or might be in the future.