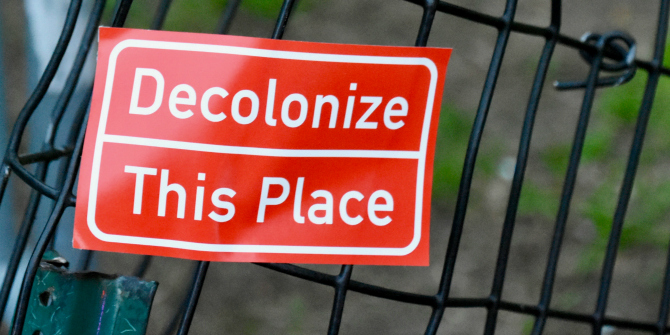 On the 18th of March, the Global Development Research Division held a workshop entitled ‘Decolonising Research and Teaching Partnerships’. The workshop was held online and hosted by Division Lead, Dr Alex Arnall. With the theme of decolonisation attracting increasing attention across academia as well as various sectors, the workshop’s broad objective was to promote reflection and discussion amongst Division members.

The first discussant, Dr Yaw Adjei-Amoako (SAGES), began by highlighting those usages of the term ‘decolonisation’ vary greatly according to context. Indeed, an institution’s or discipline’s engagement with the topic may be strongly influenced by its historical involvement in the colonisation process. As a human geographer, Yaw recognises his discipline has been deeply complicit in the colonial project, particularly when it comes to the characterisation of colonisers and those colonised. First and foremost, Yaw believes that decolonisation is about attitude and orientation, which should ultimately inform one’s actions to destabilise the persistent colonial matrices of power in knowledge production. In doing so, new spaces are created for alternative epistemologies or new representations of existing ones. Decolonisation has become an integral part of Yaw’s teaching and research practices, mainly by ensuring that a pluriverse of identities are represented throughout his modules and reading lists.  However, he acknowledges that decolonising pedagogic practices requires time, effort and often a great deal of trial and error. Consequently, Yaw feels that staff should be formally supported and thinks that institutional allyship training could help facilitate the decolonisation process across the university.

Differentiating between Diversification and Decolonisation

The second speaker, Dr Jo Davies (SADP), explained that she began to engage with the topic of decolonisation when designing the curriculum for Reading’s BSc in International Development. She has since come to contemplate the academic space more generally and in particular its privileged positionality with regards to both knowledge validation and codification. Although Jo acknowledges the importance of representing scholars from the Global South, she cautions that it can create conflation between diversification and decolonisation and further strengthen an unnecessary ‘automatic’ North/South dichotomy. Instead, she argues that decolonisation can only be achieved by redesigning and democratising the spaces of power in which academia operates. Doing so will require a re-orientation of the discipline and the promotion of multilateral knowledge exchanges that, in turn. necessitate engagement from a variety of stakeholders.

Professor Hilary Geoghegan (SAGES) opened her presentation with a quote from writer Audre Lorde: “We cannot fight old power in old power terms, only. The only way we can do it is by creating another whole structure that touches every aspect of our existence at the same time as we are resisting.” Like the previous two speakers, Hilary recognises that her field of Geography is also deeply entrenched in colonial logics and a culture that promotes both whiteness and maleness. In seeking to challenge her discipline’s perpetuation of colonial values and power relations, Hilary explains she had to undertake her own anti-racist journey. This journey has involved radical retrospection and the recognition that her structural enabled advantages have at times seen her inadvertently collude with white supremacy. Over the last year she has become acutely aware that true allyship requires ‘Vigilant vigilance’ as white supremacy is everywhere, both in daily life and research. She concluded that engaging with decolonisation is deep and demanding work which may be met with internal and external resistance but can and should be truly transformative.

The next speaker, Dr Neha Hui (Economics), provided a disciplinary perspective on decolonising the field of development economics. She began by stressing the eurocentrism of economics and its inherent resistance to change. She then went on to explain that non-Western economies are often homogenised and occupy a position of peripheral importance whilst Western capitalism persists as the yardstick of success. She believes that decolonising economics will require holistic reconceptualization of the discipline; moving away from the traditional focus on economic growth towards understanding prosperity based on physical, emotional and environmental wellbeing. Furthermore, in her role as lecturer to a diverse international cohort, Neha recognises that issues such as poverty, failed markets and economic inequality are often lived experiences for the audience. As a result, drawing on personal experiences (both her own and that of students) has helped her to recontextualise material and introduce heterodox ideas. Ultimately, Neha hopes to transcend existing binaries that idealise Western economies as those to emulate.

The final speaker, Dr Shreya Sinha (SAPD), began by reiterating how the way in which research projects are written, administered, and evaluated continues to reproduce unequal power relations between researchers based in the Global North and South. However, although she agrees with much of what had been said, she admitted that she often grapples with the meaning of decolonising development. For her, development can be conceptualised as a political project for post-colonial states. Development has been a pillar of anti-colonial struggles and continues as a genuine political aspiration. It is thus unclear what decolonising development in this sense could mean. Moreover, there exists the danger of authoritarian ideologies appropriating decolonisation to claim legitimacy, as seen in the case of India’s Hindu right-wing. Given that both development and decolonisation are open to broad interpretation, their relationship needs to be carefully considered. Finally, she emphasized that any decolonization of development studies cannot be divorced from the challenges of decolonizing and democratizing the university space as a whole, manifested in issues such as rising student debts, casualization, gender/ethnicity pay gaps, pension cuts and hostile environment for international staff and students.