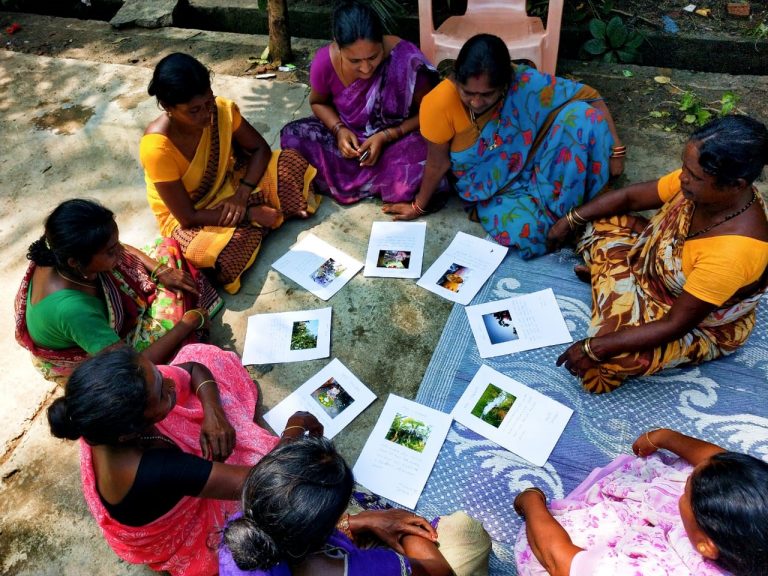 The second GDRD workshop of the autumn term took place on Friday 27th November. The session, hosted by Research Division Lead Dr Alex Arnall, showcased some of the different participatory approaches used in Global Development research at the University of Reading.

The first speaker, Dr Henny Osbahr, presented the participatory research that she has been involved in along with colleagues Dr Grady Walker and Dr Sarah Cardey in Andhra Pradesh, India. Working in partnership with a local NGO, the Zero-Budget Natural Farming (ZBNF) project has been investigating the benefits of natural farming from both ecological and social perspectives. The ZBNF represents an alternative to other extension approaches by engaging individuals that have been traditionally excluded, such as landless farmers and women. The project works with several support groups to gain a better understanding of innovation and knowledge exchange within the ZBNF community. Henny explained how the use of participatory photography within their action research design framework is based on Paulo Freire’s idea of critical pedagogy.

After an initial session where participants are trained to use a camera, they are each asked to capture an image related to a specific theme. At the next meeting, each individual presents their image and an accompanying description. The images are then brought together as a collage, producing a collective representation of the theme. This is followed by group discussion facilitated by a trained “problem poser” who directs the conversation away from description towards critical analysis, often by drawing comparisons between the different images. This process enables exploration of topical themes and the subsequent emergence of generative ones. These visual methods help to reveal which factors are important in determining individual behaviour and driving collective innovation.

The next presentation was given by Dr Sam Poskitt on his work on Participatory Scenario Planning (PSP). PSP is a process by which individuals of different social and disciplinary backgrounds collectively imagine alternative plausible narratives of the future. Over the last 25 years researchers have increasingly used PSP to support socio-ecological resilience in relation to issues like social inequality and environmental degradation. Much like the ZBNF’s participatory approaches, Sam’s work is grounded in theories of pedagogy. He described how the framework he used to analyse PSP builds on Vygotsy’s zone of proximal development, the idea that people’s capacity for learning can be enhanced through interactions with others. Taking a qualitative approach, Sam reviewed 30 case studies of PSP and interviewed 16 PSP practitioners. He found that exploring narratives of the future provided a focal point and structure for discussion between individuals of different backgrounds. Ultimately, this process enables participants to engage in collaborative, focused creative thinking. Like the visual methods discussed by Henny, Sam highlighted the importance of a trained facilitator to the process.

The final speaker was Dr Lorenzo D’Angelo who presented an extract of his ethno-fiction documentary that he created as part of the GOLD MATTERS project, which focuses on artisanal mining. As a genre, ethno-fiction blurs the boundaries between film and ethnographic documentary and involves the participants interpreting themselves and improvising situations from their daily lives. He went on to explain that there is no script or predetermined narrative. Lorenzo’s research methods were heavily influenced by Jean Rouch’s seminal piece Moi, un Noir. Like Rouch, Lorenzo does not view the camera as a passive recording device but instead as an interactive cinematic tool. He explained that he adopted two fundamental working principles. Firstly, taking a “step back” to ensure his influence in determining the narrative was minimal. Secondly, taking a “step sideways” by casting another participant as the interviewer.

The workshop demonstrated how different innovative approaches can be employed to boost participation in research. Indeed, the post-presentation discussions highlighted how participatory methodologies can foster creativity on the sides of both researchers and participants. Another key point that emerged was the importance of sharing information back with communities. Indeed, all speakers acknowledged that participatory research extends well beyond traditional methods where interactions often end once data collection is concluded. Sam pointed out that without appropriate follow up, participatory research remains extractive and does not achieve long-lasting empowerment.