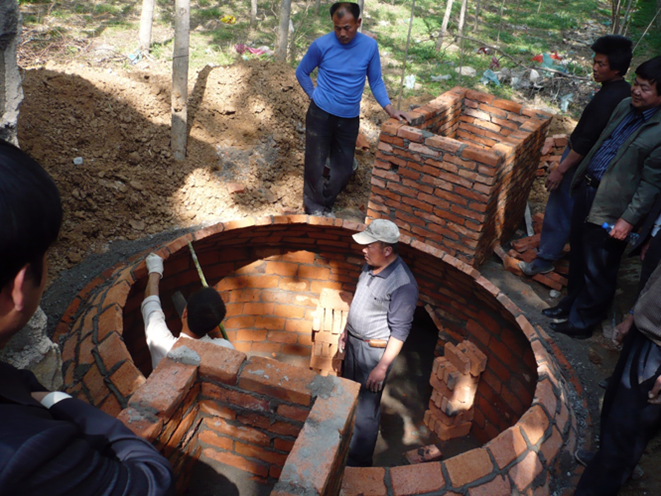 In this short piece Stefania Lovo, Pan He, and Marcella Veronesi reflect on their recent work which considers the role social networks play in the adoption of Biogas technologies in Hubei Province, China.

Decentralised energy technologies have the benefits of generating energy close to where it is used and typically involve renewable energy sources, such as small hydro, biomass, solar and wind power. A decentralised renewable energy system has the potential to increase security of supply, reduce transmission losses and lowers carbon emissions. In this context, understanding how information and behaviour spread at the local level, and ultimately impact the adoption of renewable energy is key for the effective design of technology promotion policies.

Our research investigates how social networks affect the adoption of renewable energy technology. Social networks can include not only close relatives and friends, but also neighbours, colleagues, and local leaders or officials. On one side, social networks can facilitate the diffusion of information, inducing a process of social learning. On the other hand, peers can exercise social pressure that can encourage (or discourage) the adoption of socially desirable (or undesirable) technologies.

We study the effects of social networks in the context of biogas in China. In 2003, the Chinese central government launched a subsidized biogas programme that was advertised by government officials in each village. The subsidy supported the installation of a biogas digester connected to pigsty and toilet, so that organic waste can be degraded by bacteria to generate fuel for energy. Biogas brings some benefits to the household as it saves time and costs related to traditional energy materials, such as wood or liquified petroleum gas. The waster also helps eliminate the spread of diseases, and produces organic fertilizers for agricultural use as a by-product. Biogas can also bring socio-economic benefits by protecting forest lands and contributing to the reduction of CO2 emissions and air pollution. Overall, the direct financial benefits to households are largely outweighed by the wider socio-economic benefits, which often motivates the introduction of subsidy programmes.

For our study, we collected data on farmers’ adoption of biogas and the composition of their social network, across twelve rural villages of the Hubei Province of China. We collected data on information exchange between the respondents and people in their network and on the characteristics of network members. For example, we recorded their relationship with the respondent, where they live, and we elicited whether they are considered trustworthy.

Our results show that social networks can help promote the diffusion of biogas technology both through the diffusion of information and through social pressure. Yet, these effects are not unconditional.

In particular, we find that information spreads only through trusted people such as friends and family, and in particular if they live outside the village. Surprisingly government officials do not play a major role in the diffusion of information about biogas. Although local officials are among the best informed about the biogas program, the information received from them does not necessarily translate into adoption. This suggests that the “messenger matters as much as the message” and information from family and friends is more effective than official information as the former enjoy relatively higher levels of trust.

On the other hand, we find that government officials can influence adoption by having biogas installed in their own property. We explain these findings focusing on an important feature of biogas technology: its visibility. Biogas installation requires major remodeling of the house and the construction process usually takes several weeks. Its visibility ensures that adoption can be observed by others, hence can act as a signal devise. In particular, we argue that through biogas adoption household can signal alignment with public authorities and/or fellow villagers and support for wider environmental and health benefits. Taken together these findings suggest that government officials are more likely to promote technology adoption by leading by example rather than by spreading information.