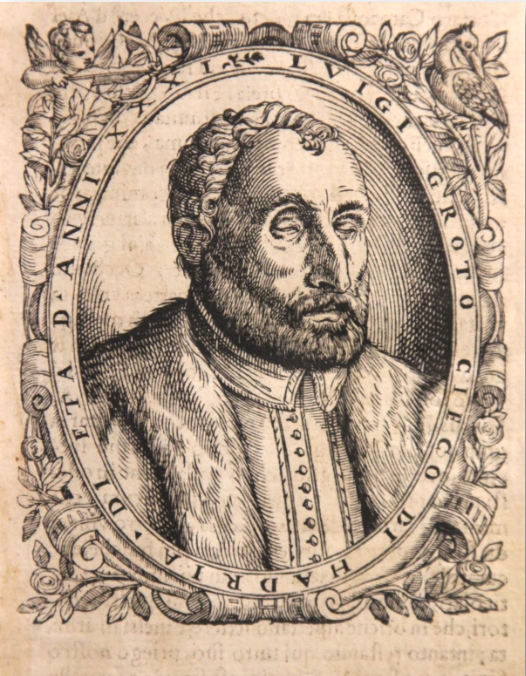 Dr Laura Carnelos, Collections Research Assistant in Typography & Graphic Communication at Reading, draws on her postdoctoral work at the University of Venice to illuminate the experience of a famous blind author, Luigi Groto 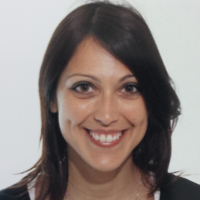 Luigi Groto (1541-1585), also known as the cieco d’Adria, was the most famous blind author of sixteenth-century Italy. Since birth, he had only been able to see lights and shadows, as he once told a female correspondent. Despite this almost total blindness, from his very childhood Luigi had displayed particular mnemonic talent and brilliant oratorical skills. For his singular ability to compose verses and recite on stage, he was called to entertain audiences in important public events organised by the Venetian Republic. Scholars of the health humanities can learn a great deal from Groto about sixteenth-century experiences of sensory disability.

Incapable of reading and writing alone, Groto sharpened his hearing, and used his ears as eyes. He regularly asked trustworthy friends if he could ‘borrow’ their eyes and hands in order to read and write. Grotto’s numerous works circulated both in printed and manuscript form, handwritten by his scribes (‘da’ miei scrittori’), who sometimes transcribed them directly during his performances, as he remarked in the introduction to his book, Le oration iitaliane, e latine.

Groto was at the height of his career when he was charged with possession of prohibited books in 1567. Forbidden from teaching, one of his main sources of income, Groto even contemplated death as an alternative to having to beg for help in his reading, writing, and personal care. In his letters, Luigi wrote of his frustration of being deprived of an activity which had enabled him to study, as well as to interact with sighted people. Besides being blind, we know from Grotto’s letters that he did not consider himself a good-looking man, and his physical defects deeply influenced his social and personal life. Rejected by women of his own social status, he finally formed a relationship with a servant and concubine called Caterina, with whom he had two children (who he never recognised).

Perhaps it was this sense of isolation and powerlessness that prompted Groto to go on to construct his own identity as a blind prophet, which secured him much success and reward. In 1567, he predicted the overflowing of Italian rivers based on the reading of astronomical and physical indicators, and of the cabala. In 1570 he translated the first book of Homer’s Iliad, taking advantage of the rediscovered image of Homer as a divinely inspired sage, and almost comparing himself to the greatest Greek poet. In 1572, he edited Trofeo della vittoria, celebrating the Venetian victory against the Turks at the Battle of Lepanto, which he had foretold through astronomical signs and a special anagram.

Through these publications, Groto’s image as a blind prophet, as well as a good-looking person, began to take shape. In his 1572 publication, Gasparina Pittonia, a friend of Groto and a renowned engraver, depicted his face with his physical defects: an aquiline nose, high cheekbones, and wrinkles on his forehead. However, ten years later these characteristics were visibly reduced in the portrait of the blind man by Tintoretto’s workshop. The motto, ‘he was blind, but he could see with his soul more than others’ (‘multum animo vidit, lumina cactus erat’), is emblazoned on the book that Grotto holds in the portrait, emphasising his inner sight and superior sensibility. We do not know if this inclusion was Grotto’s wish, but he did appreciate the painting in which, according to a friend’s description, he was represented in his ideal persona of literary man and blind seer, without any evident physical defect. This image of a blind prophet was reinforced nine months before his death, when Groto played the role of Teiresias or Oedipus (critics disagree about which) at the opening performance of the Teatro Olimpico in Vicenza. By acting the part of classical blind figures and disseminating his idealised portrait engraved and printed in his works, the construction of Grotto’s image as the prophetic blind man was confirmed.