Today in western healthcare, a special branch of medicine is dedicated to the care of patients recovering from critical illnesses – rehabilitation or convalescent medicine. Involving a host of professionals, including intensive care specialists, nutritionists, clinical psychologists, and occupational therapists, rehabilitation medicine seeks to help patients regain their former physical and emotional health after a life-threatening or debilitating disease. We might be tempted to assume that convalescent medicine is a modern invention, which coincided with advances in medicine; back in the ‘olden days’, when remedies were ineffective or even dangerous, surely the sick would have died rather than recovered. In a new open access chapter, ‘She Sleeps Well and Eats an Egg’, I show that this was not the case. Convalescents were ubiquitous in early modern England. Typically described as ‘pale as marble’ and ‘lean as skeletons’, these patients were deemed worthy of their own distinctive type of medicine, which was designed to restore strength and flesh to the body, and prevent relapse into disease. To achieve these aims, doctors and family members monitored and managed what were known as the ‘six non-naturals’, the patient’s excretions, sleep, food, emotions, air, and exercise. A gentle laxative, followed by nutritious and easily digestible food, merry company, and plenty of sleep, expanded the body’s ‘spirits’ and ‘radical moisture’, thereby fattening and enlivening the whole person. I argue that these various interventions constituted a concept of convalescent care, or to use the contemporary term, ‘analeptics’.

This open access chapter is part of a collection on Conserving Health in Early Modern Culture (Manchester University Press, July 2017), edited by Sandra Cavallo and Tessa Storey. Here is the download link: 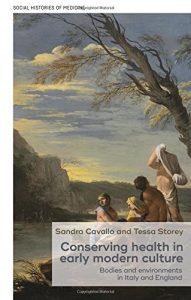