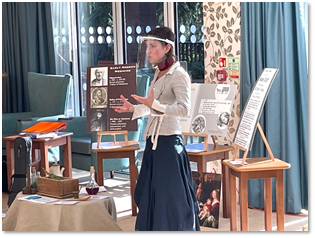 Amie Bolissian is the Postgraduate Representative and Social Media Manager at the Centre for Health Humanities, and is in the final year of her Wellcome Trust-funded PhD project on early modern understandings of old age, and the experiences of ageing patients and their caregivers.

When we dreamt of holding ‘History of Health’ workshops at a local care home in Reading, we never imagined that Bob Marley and horses would feature so prominently. In fact, we were not sure if they could happen at all. Most stories that begin ‘I had an impossible dream’, tend to involve sailing around the world single-handedly, trying to get global leaders to focus on the bigger picture, or staging a West End musical from an original story. Rarely do they involve a nerdy, historical researcher wishing she could share her research on ageing health with care home residents for the annual Being Human Festival. We were adamant that new learning was not just for the young, but during a global pandemic where age is a risk factor, and care homes have been disproportionally affected, this dream did seem a little far-fetched.

Until, that is, the Summer of 2021. The vaccine roll-out was taking effect, some restrictions were being lifted, and a series of local Reading heroes stepped into the story. Firstly, the Centre for Health Humanities at the University of Reading (where I am based) agreed to fully supported the project, along with the Wellcome Trust who fund my research. We wanted to create workshops for the residents that were informative, creative and fun, and we wanted to do it safely. My doctoral research on ageing health in Tudor and Stuart England has shown that people believed it was healthy for ‘old folks’ to be made cheerful with company, music and memories (as well as a regular intake of wine, apparently). When I shared our ideas with the next hero of our story, Georgia – the Reading Council Sheltered Housing Activities co-ordinator – she said that if anyone could do with a bit of music and cheer it was the residents of their extra care facility (but no wine please). All the site’s activities had been cancelled during the previous 18 months, and now they were finally opening up, they were enthusiastic to try and make the workshops happen. And that is when we involved the fourth hero of our story, Rima from Wholestep Music Therapy.

Rima embraced the idea immediately. She patiently listened to my enthusiasm for ‘broadside ballads’, which were printed on single sheets in vast numbers, in the 1600s, and sold cheaply throughout the country. They were among the first forms of mass entertainment. With lyrics set to a familiar folk tune, they were performed by minstrels in village squares, taverns, and fairs. The sheets were pasted to walls, and the woodcut illustrations were often used as decorative adornment in inns and houses (see picture below).

Despite being called ‘ballads’, they were usually lively, catchy, and often a bit saucy. They might contain moralising tales, or satirical spins on current news events. We wanted to create our own broadside ballad in collaboration with the care home residents. They would choose a favourite tune, we would use lyrics inspired by their memories of things that made them cheerful, and illustrations drawn by them. Rima was all over it.

And so were the Being Human Festival conveners. They accepted our proposal, and made all their fabulous resources, experience, and promotional materials available. November rolled round.

From the outset, we knew the workshops were going to be special. Georgia had gone to extraordinary lengths to make everything work, and keep everyone safe. Rima had prepared a set of songs for us all to sing, and sanitised instruments to play. We had a list of songs chosen by the residents, as well as some extra ones she was sure they would love (they did…who can resist a bit of Elvis?). And above all, the final heroes of the story, the welcoming, enthusiastic, and open-minded group of residents who joined us for an afternoon of history, music, and reminiscence.

Over the two events, we discussed understandings of health and ageing from the sixteenth and seventeenth centuries. We looked at theories about the body, derived from ancient teachings, and the idea of our internal ‘spirits’ raised particular interest. The spirits were thought be thin, airy substances that sped around the body, stimulating movement and vigour, and carrying messages from the soul, heart, and mind to the rest of the body. Early modern people believed that things like sadness and old age made the spirits tired and low, which made the body unhealthy. Lifting a person’s spirits with good cheer was therapeutic, and the phrase still remains in use today.

The group engaged with these ideas and shared some of their own tips for healthy living. One recommended staying active, another swore by a daily vitamin, and they all raved about their roof garden which had been transformed by one of the residents in lockdown and was now a magical haven of shrubs, produce, and blooms. When we started to sing together, we shared memories inspired by the songs. One resident described how, as a boy, he had ridden bareback on his Grandad’s horses in South Reading, and considered them and his grandfather his best friends. This inspired a beautiful illustration of a horse for our ballad sheet by another attendee. We discovered that two of the group had seen Bob Marley perform live in the seventies, which prompted a raucous singalong to ‘Three Little Birds’. Many other memories appear below, in the lyrics to the final ballad composed by Rima. The song that got everyone singing the loudest was the classic ‘You Are My Sunshine’, and we chose this as the tune for our ballad.

Not all the memories we explored were cheerful. Many spoke of the loneliness of lockdowns, and how much they had missed social events such as this. We asked how they had coped, and they said they just had, because …well, you have to, don’t you? When they got up to leave the final session, I overheard someone saying quietly ‘Well, I really enjoyed that. I really enjoyed that.’ And we all did. We shared new things with new people, music and laughter, and collective creativity, something that had been made difficult to do in-person for a long while. In this way, the workshops contained many elements of healthy ‘cheerfulness’ from seventeenth-century medical manuals. Cheerfulness was recommended because it was a healthy, gentle ‘passion’. It was not like the ‘lightning’ flash of ‘mirth’, but instead kept up ‘a kind of Day-light in the Mind’, filling it ‘with a steady and perpetual serenity’.1 After both the stress and the tedium of the COVID restrictions, a little steady and perpetual serenity, sunshine, memories of horses, and Bob Marley singing ‘every little thing was gonna be alright’ turned out to be not just a possible dream, but a very welcome one.

Thanks again to the Centre for Health Humanities, University of Reading, Being Human Festival, and the Wellcome Trust.