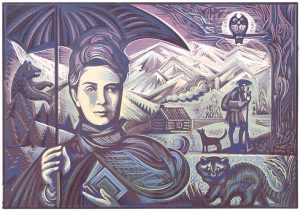 Scholars have long been familiar with the scientific endeavours of late
19th-century women travellers like Isabella Bird and Mary Kingsley, but
these figures have generally been assumed to be pioneers, blazing a new
path for scientifically inclined women. Recent research, however, has begun
to uncover Bird and Kingsley’s many predecessors in the 18th- and early 19th-centuries – women such as Maria Riddell, Maria Graham and Sarah Bowdich, whose journeys to regions such as the West Indies, South America and West Africa were productive of scientific knowledge and debate across a range of disciplines.

This two-day workshop, organised by Nottingham Trent University’s Centre for Travel Writing Studies and sponsored by the British Academy, seeks to shed further light on women’s scientific travelling in the period before 1850. We accordingly welcome proposals for papers which explore any aspect of the intersections between women, science, travel and travel writing at this date, including (but not limited to): women who travelled in scientific spirit, conducting fieldwork or other forms of research; women who used travel writing as means of engaging with or contributing to contemporary scientific debate; the discursive and rhetorical obstacles faced by scientifically inclined women; the wider intellectual and cultural  networks which enabled and assisted women’s participation in contemporary science; and women’s role as travellers between different scientific communities and audiences.