By Natalie Sanders and Wang Han

Using leaf morphological traits in ecosystem modelling is limited, primarily because the function of many traits is unclear and their relationship to climate unknown. A new paper out led by Wang Han addresses this issue:

Morphological traits such as the colour or shape of the leaf, whether the leaf is single or compound and how many dissections it has are widely used in plant classification. We also know that these traits differ depending on the climate, for example plants that have waxy leaves with drip-tips (as in the photo above) are very common in high rainfall biomes, such as rainforests.

Some of these adaptations have a single clear function, such as an involuted leaf which curls to trap waters, or hypostomatism, where the stomata are only on the underside of the leaf to reduce water loss or the drip tip to remove excess water.

However, many morphological leaf trait adaptions could have multiple functions and it isn’t clear which is the main driver. For example, tough leaves help protect the plant from herbivory, but they also protect against mechanical damage and provide resistance to overheating.

The question remains for many traits as to which function of the trait is most important to the plant and whether these traits represent adaptations to more than one feature of the growth environment.

There have been advances in using empirical studies in plant functional ecology and also using theoretical analysis based on eco-evolutionary optimality principles, which underpins much of Sandy and Colin’s work. This has made attempts to predict the relationship between functional traits and environmental conditions. However, the same cannot be said when it comes to leaf morphological traits. Their use in modelling is rather coarse such as a present/absent and overall have been largely lacking in surveys, theoretical analysis and modelling.

Leaf morphological traits such as leaf size and dissection have previously been used to reconstruct climates of the deep geological past. Therefore, it should be possible to also apply morphological traits to contemporary climate change. But first a better understanding of these systematic trait-climate relationships is required. 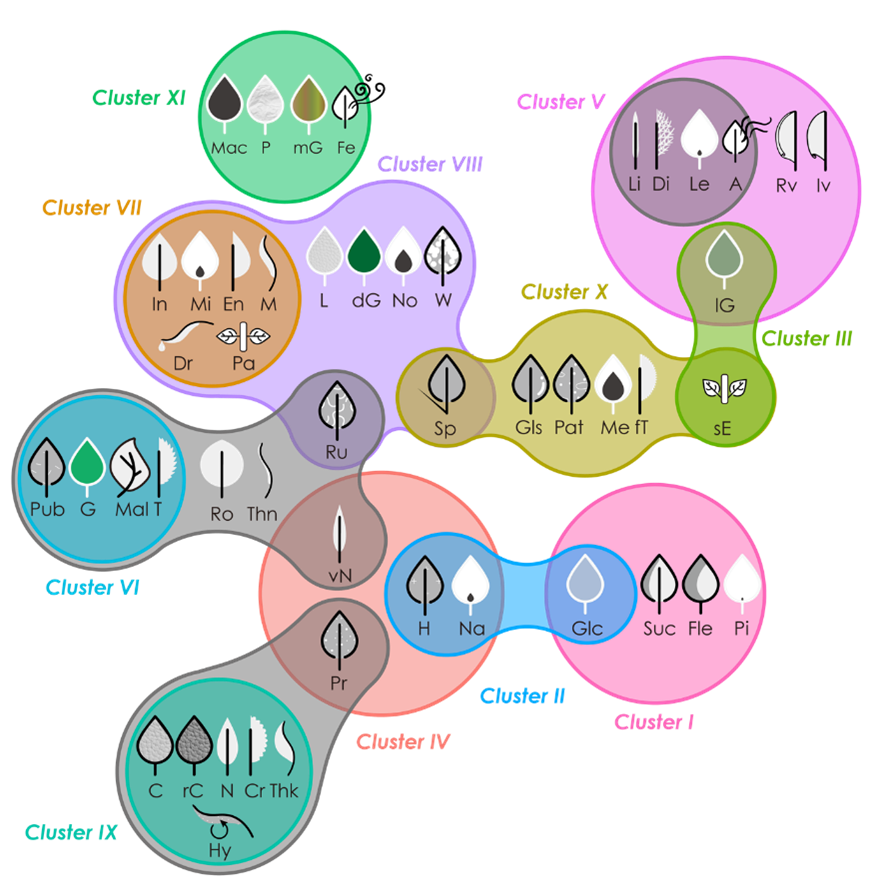 Figure 1. Summary of trait combinations from 20 repetitions of the k-means clustering. The clusters represent the consensus of the most frequently allocated cluster membership in these repetitions. Traits appearing in the same colour-coded shape are those occurring in that cluster; traits occurring in multiple shapes were assigned to different clusters in different repetitions. The abbreviations of each trait are listed at the end of the blog.

The results showed that there was separation of leaf traits along three climate gradients as summarised in the table below:

Along these three climatic gradients the shifts in trait abundance are mirror by the changes in vegetation. Rainfall seasonality separates deciduous and evergreen forests, supporting the idea that climate plays a role in the patterns of change in trait abundance. Family had the largest effect on trait variation with the site also, an albeit small, control. However, the combined contribution of family, climate and site factors accounted for only a small part of the observed variation in leaf morphological traits. The response of size, shape, colour and other traits and their shift along climate gradients reflects plant adaptions to the environment at a community-level as determined by species replacement.

This study revealed that some traits may serve multiple functions and so in future studies should clarify and quantify the functional significance of leaf morphological traits. This paper also demonstrates that leaf morphological traits, which are widely available, could be used in models to assess the consequences of climate change on species distribution and vegetation function.

You can read the full paper here:

Wang Han is an associate professor in the department of Earth System Science at Tsinghua University, Beijing. She conducted her PhD under the supervisor of Prof Iain Colin Prentice at Macquarie University. Colin and Sandy Harrison are both High-End Foreign Experts at Tsinghua University. This paper was also funded through Colin’s ERC REALM project and Colin and Sandy’s LEMONTREE project.