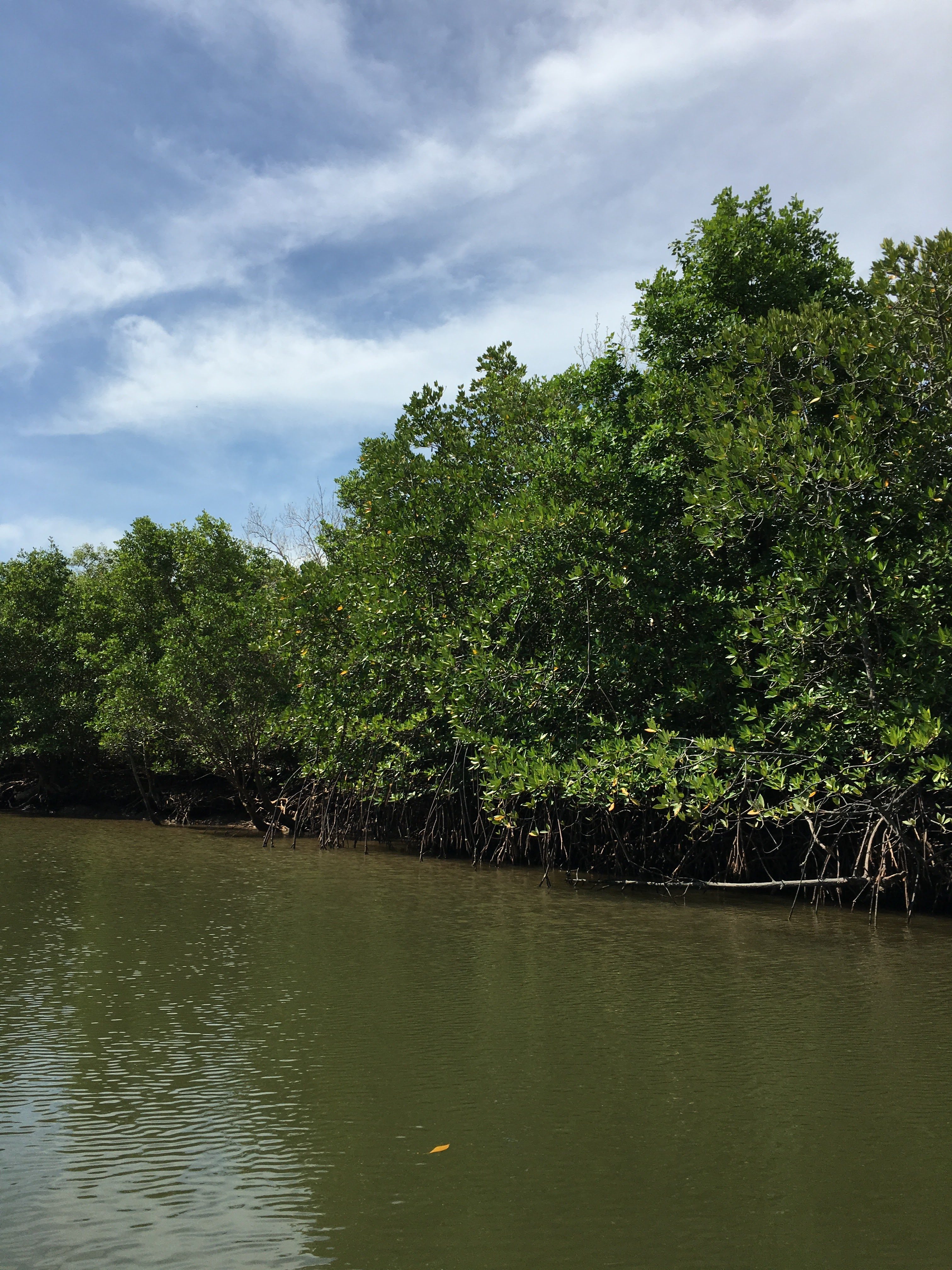 The regulating services provided by mangrove forests are extensive.  Some important ES include carbon sequestration, coastal protection, and flood and erosion control. Firstly, carbon sequestration and burial refers to the absorption of carbon from the atmosphere and its retention in underground storage.[1][2] In 2015, according to Alongi and Mukhopadhyay, mangrove forests occupy 2% of the world’s coastline and are responsible for approximately 30% of carbon burial in tropical and sub tropical continental borders.[3] This carbon sequestration and burial process is considered important to mitigate the impacts of climate change.[4] Mangroves forests are highly productive, carbon rich ecosystems and compared to terrestrial forests they have a greater ratio of below to above ground carbon storage.[4]

Mangrove forests provide various levels of coastal protection from storm surges, tsunamis, erosion, strong winds and wave action. Firstly, storm surges occur when increased winds and low pressure from tropical storms (hurricanes, cyclones and typhoons) steadily raise the sea level above normal tidal levels.[5][6] Mangrove forests attenuate storm surges and waves directly and indirectly. Directly, the trunks, leaves, root network and pneumatophores weaken the water velocity and turbulence.[6][7][8] While indirectly, with their root networks mangroves provide stabilisation and development of the coastal soil.[6][9] In 2008, according to Das and Vincent, in a study of 409 villages in India that were affected by a powerful cyclone in October 1999 it was found that villages with greater widths of mangrove forests to the coastline recorded much fewer deaths as compared to villages that had little to no mangroves. [10]

Tsunamis are natural hazards that occur when underground earthquakes and volcanoes result in multiple large waves that displace large quantities of sea water.[6] Mangrove forests offer some limited protection against tsunamis. The level of protection is dependent on other variables such as mangrove forest type, density, stem and root size and invariably the magnitude of the tsunami itself.[9] Modelled output for a 100 metre wide forest showed an approximate 90% decrease in the tsunami flow pressure. This study was simulated on the 1998 Papa New Guinea tsunami.[9][11] However, in 2011 Laso Bayas et al., cautioned on the over reliance on mangrove forests for protection from tsunamis, this study found that mangrove forests offered limited protection. In the 2004 Indian Ocean Tsunami that affected Indonesia casualties were reduced at settlements behind mangrove forests by 8% but structural damage remained.[12]

Despite the benefits gained in mitigating natural hazards it is important to note that the extent of coastal protection will vary in scenarios where initial impact by multiple wave tsunamis and storm surges damage and deplete the mangrove forests protective ability.[13] Therefore, less protection capability to multiple and frequent future waves from tsunamis and surges is possible.[6] Mangrove forests are indeed valuable ecosystems, but in considering their protection from tsunamis and storm surges there are many exogenous factors that have an important role.[14] Factors such as topography, elevation, other marine seascape factors like coral reefs and seagrass beds also contribute to natural hazard mitigation.[6]

Thirdly, coastal erosion that also occurs due to wave action is influenced by mangrove forests. The complex root system of many mangrove species contributes to strengthening the soil and increases sediment build up.[15][16] Organic matter is added from leaf litter and the roots which can elevate the soil profile and reduce erosion thus encouraging a stabilisation effect of the soil.[9] As a result mangrove forests have expanded coastlines from the accumulation of sediment and organic matter combined with reduced erosion.[6][17] A correlation was observed between mangrove plant structure and coastal erosion where deforested coastlines exhibited similar levels of erosion as coastlines where mangroves were not part of the seascape.[7] Flood control is another important regulating service of mangrove forests.

Flood and water flow control is a regulating service with indirect use value provided by mangrove forests.[18] In 1998, according to Ewel et al., basin mangrove forests may provide protection from episodic floods by providing greater storage capacity for runoff.[19] Flooding may occur due to storm surges, tidal changes and torrential rainfall. The risk of storm surge flood occurrence is exacerbated in low lying areas which often coincide with development and infrastructure.[20]  Expansive and wide mangrove forests contribute to significant flooding reduction in flood prone areas due to the root structure that assists with sedimentation.[5][21] Furthermore, in instances of flooding mangrove forests has notably reduced the organic matter leading to water purification and quality improvements.[22]

Mangrove forests are recognised for their benefits in treating water from flooding, wastewater from aquaculture and sewage resulting from increased development.[23] Mangrove forests efficiently process wastewater pollutants from pre-treated secondary sewage from domestic waste through tidal flushing, mangrove plant uptake and microbial metabolic functions in the sediment.  Furthermore, it was determined that mangrove-aquaculture coupling systems are effective in treating aquaculture wastewater.[23]

The cultural services utilised from mangrove forests are due to the unique landscape and diversity in flora and fauna.[24] Firstly, tourism is major service that can be gained from mangrove forests. In 2013, according to Uddin et al., tourism increased over the years at the Sundarban reserve due to increased investment into facilities improvements by the Forestry Department (FD) and private tour operators increasing revenue for the FD.[25] A subset of tourism known as eco-tourism is another considerable opportunity from mangrove forested sites.  Ecotourism refers to where little to zero negative impacts occur on the environment it is non-damaging, non-degrading and sustainable in approach and it considers the primary motive to participate is the enjoyment of nature.[26] Ecotourism and bird watching are considered a benefit of mangrove forested sites.[27]

Another cultural service at mangrove forests sites that can be found in many forms is recreation. In 2012, according to van Ripper et al., at the Hinchinbrook National Park, Australia mangrove sites are used for recreational fishing in the estuaries. Furthermore the area is used for sea kayaking, snorkelling, diving, traditional hunting and spear fishing.[28] The natural aesthetics of these forests are also important for both tourism and recreation. Undisturbed mangrove forested sites are attractive to tourists and communities. The development of trails and boardwalks are noted as an opportunity to generate income from land that may otherwise be undeveloped.[19] In some cases such as the Pacific islands in addition to the natural aesthetic benefits, mangrove stands may reside on land that has a customary value to local communities.[29]  Customary values can encompass traditional and spiritual uses such as Rusha Mela and Bano bibi as observed by the Hindu communities at the Sundarbans.[25]