Updates to One Hundred Years of Reading Weather 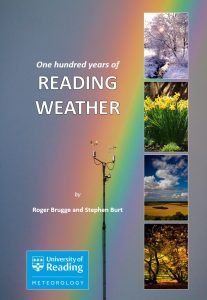 As part of the 50th anniversary of the University of Reading’s Department of Meteorology, Roger Brugge and Stephen Burt wrote a book entitled One hundred years of Reading weather, published in June 2015.

The authors realise that parts of almost any weather book containing statistical information will tend to become out of date almost as soon as it is written. This is especially so in the case of a detailed study of the weather in which, by necessity, the amount of information provided has been reduced in order to provide the reader with a manageably-sized volume and when it is generally accepted that the climate of the location under study (Reading) is ever-changing!

The purpose of this webpage is, therefore, to keep the reader up-to-date with news about Reading’s weather as new, noteworthy events occur or as records are broken.

Reference is made to chapters, pages and tables of the book as appropriate – so that the reader may incorporate their own changes should they wish to do so.

Page 90: The longest continuous period of unbroken snow cover commenced on 27 December 1962, not 1963 as stated.

Page 116: Thus records do suggest a greater tendency for wet days to occur twice as frequently as might be expected during this weekend holiday period.

Two cold but exceptionally clear days on 24 and 25 February 2018 broke new February sunshine records. Since sunshine records commenced at the university in 1956, the sunniest February day has managed 9.5 hours of bright sunshine (measured by the Campbell-Stokes sunshine recorder): this was recorded on 20 Feb 1970, 27 Feb 1973 and 26 Feb 1977. On Sunday 25 Feb 2018, the day’s sunshine totalled an unbroken 9.6 hours. The previous day, Saturday 24 February, recorded 9.3 hours of sunshine, which itself would have been the third-sunniest February day on record, and either day would be credible at midsummer. Together, the total for the two days of 18.9 hours exceeded any two combined February days in over 60 years of records.

A remarkable mild and sunny spell of weather for late February occurred 25-27 February 2019. The temperature reached 19.5 °C on the 26th with a diurnal temperature range of 20 degC – both new high records for the month. On the 26th 9.5 h of bright sunshine was recorded – just 0.1 h less than the February record set he previous year. The highest February air temperatures and the sunniest days are now as follows:

March 2017 was the warmest March in the Reading record. There were no air frosts during the month, following just 2 air frosts in February while the following April recorded just 1 air frost. The minimum temperature recorded on the 30th was 10.9 °C, while 10.8 °C was the lowest temperature on the 19th. Tables 6.1 and 6.3 now read as follows:

At noon on 1 March 2018 the temperature stood at just -3.5 °C, and with a strong north-easterly wind the windchill value made it feel more like -10 to -12 °C – approaching frostbite thresholds. Snow fell and drifted throughout the day, although fortunately Reading didn’t see as much snow as in other parts of the country, and the temperature rose very slowly throughout the day and into the night as less cold air associated with storm ‘Emma’ began to push in from the south. The temperature finally reached -0.9 °C at 2 a.m. according to our automatic weather station within the campus’s Atmospheric Observatory. In over a century of weather records, this was only the third March day to remain below freezing throughout, and easily surpassed the previous coldest March day – 6 March 1942, when the day’s highest temperature was only -0.6 °C. This is a new entry in Table 6.1.

The maximum temperatures recorded at the University of Reading’s weather station over the weekend 17-18 March 2018 were just 0.8 °C on Saturday 17th and 0.9 °C on Sunday 18th. Both were unusually cold days for so late in March – in fact in records at the university dating back to 1908 no date after mid-March had ever previously failed to reach 1.0 °C.

Going back further, the temperature on 29 March 1952 rose to only 1.2 °C. That cold event gave some heavy snow with 10 cm lying on the 30th, causing widespread travel disruption around Reading on the 29th and 30th. This event was also a result of a cold easterly airflow on that affected the southern half of England which led to snow drifts of over 1 metre in depth in parts of the Chilterns.

April 2018, after a cold wet start, included a very warm spell after mid-month, with a new highest April temperature on record being recorded on the 19th. New entries in Table 7.1 are shown below:

Table 7.1 Highest maximum and minimum temperatures in April, 1908-2018. Records are from the (slightly milder) London Road site 1908-67, and from Whiteknights 1968-2018: no corrections for site differences have been applied.

May 2018 was an unusually sunny month. By the end of the 27th the accumulated sunshine amounted to 259 hours – but then the final four days were duller with just 6.3 hours being recorded. However the overall total for 265.3 hours still ranked the month as the second sunniest in the station record – with ten days each recording in excess of 13 hours of sunshine.

The sunniest Mays in the station record are as follows:

June 2016 was an unusually dull month; in fact, it was duller than each of the three months March-May 2016 and was the third dullest June on record. The dullest months shown in Table 9.4 now read as follows:

June 2017 enjoyed a five-day hot-spell during the 17th-21st, which included four successive days each reaching 30.0 °C or above; on the 21st 32.5 °C was reached, the highest temperature in June since 1976. The highest daily June maximum temperatures (Table 9.1) now read:

Indeed, this warm spell in 2017 helped to produce the second warmest June on record, while the following June (2018) was almost as warm – see the modified Table 9.2:

July 2015  began with hot weather. After an overnight minimum temperature of 18.5 °C, the temperature climbed rapidly to 30.6 °C by 0900 GMT on the 1st; this was 2.2 degC higher at that time of day than had ever been recorded previously at the university in any month. By the end of the day (the 1st) the temperature had reached 33.5 °C.

But July 2015 ended on a cool note; on the 31st the minimum air temperature was 5.0 °C and there was a slight ground frost.

On 25 July 2019 the highest July temperature in the record was observed, with 36.0 °C being the equal second highest reading in any month. Consequently the month now appears in both the list of highest and lowest July temperatures (Table 10.1):

A minimum temperature of 19.6 °C during the night of 19-20 July 2016 occurred during a spell of hot weather that saw the temperature reach 31.9 °C on the 19th. This night ranked as the second warmest July night on record and the fifth warmest night in the entire record at that time.

Violent thunderstorms during the evening of 18 July 2017 (when 36 mm of rain fell in one hour, according to the Met Office MMS raingauge) and lesser thunderstorms before dawn the following morning, led to a total fall of 45.1 mm of rain – although in total rain fell for just 3.3 h. This is close to the expected rainfall of 45.9 mm for the whole of July. The deluge led to some roads being flooded for a time, and water ingress into buildings. In Tilehurst a lightning strike led to a loft fire. The wettest July days now rank as follows:

T denotes a day when thunder was heard.

July 2018 was a remarkably warm and sunny month. It was also one of the driest July months on record with the only precipitation falling by 0900 GMT on the 27th being a fall of 0.5 mm on the 20th and a trace of rain on the 26th. But some wet days in the final week gave a monthly total of 14.0 mm.

During July 2018 daytime temperatures reached  30 °C on five days although nighttime minimum temperatures never exceeded 17.2 °C. As a result, although the month was very warm overall by day, the month was 0.4 degC cooler than July 2006. The warmest Julys, Table 10.2, are now as follows:

September 2016 was an unusually mild month. Overall it was the fourth warmest September in the station record, due to some very warm days. The occurrence of three of the five warmest September months in the period 2005-2016 is worthy of note.

The air temperature fell to a low 0.8 °C on 25 September 2018 during a spell of high pressure. MSL pressure at 0900 GMT that morning was the equal highest on record for September at 1039.5 mb, as a large anticyclone migrated eastwards from south Wales during the day.

October 2018 had a spell of relatively mild nights during the 11th to 17th, with the the minimum temperature on the 13th dropping no lower than 16.1 °C, one of the mildest October nights on record. Table 13.1 now includes the following:

November 2015 was a remarkably mild and dull month in Reading, although on the 21st there was a slight fall of snow – which occurred before the first autumn/winter air frost for only the seventh time in 108 years. During the month there were 17 sunless days.

December 2015 saw a continuation of the unusual warmth of the preceding November with the temperature rising to 14.6 °C on the 16th; this was then followed by 15.5 °C on the 17th and 19th. Then, after a mild Boxing Day, the minimum temperature recorded on the 27th was the highest on record for the month, at 12.8 °C.

No air frost was recorded during December 2015 – the first air frost-free December in the entire station record. Overall, the month was 5.8 degC warmer than the 1981-2010 average, the largest positive mean temperature anomaly (by 1.9 degC) for any month since the station opened.

December 2016 was the fifth driest December in the record due to generally very anticyclonic conditions that prevailed for much of the month. Table 15.3 now stands as follows:

2018, containing several warmer-then-average months and a hot July, proved to be the equal third warmest year on record, despite cold, snowy spells in February and March (see Table 16.1. It was also the second sunniest year on record, due largely to an unusually sunny extended summer (May-September).

The warmest years are now ranked as follows:

The sunniest years are now as follows:

The spring of 2015 was unusually sunny, helped in part by the very sunny April. The sunniest springs (Table 17.8) are now as follows:

The spring of 2017 was a mild season with very little air frost. The warmest springs (Table 17.6) are now as follows:

The driest summers are now as follows:

The sunniest summers are now as follows:

The mean temperature anomaly for December 2015 was far greater than anything recorded in any other month of the Reading record. The warmest months by departure from the 1981-2010 average (Table 22.5) are now:

A minimum temperature of 19.6 °C during the night of 19-20 July 2016 ranked this as fifth warmest night in the entire record at that time.