Initiated in 2021, this University of Reading research project is excavating the site of an Anglo-Saxon monastery in the vicinity of Holy Trinity church in village of Cookham, Berkshire.  Cookham forms one of a network of Anglo-Saxon monasteries established along the route of the River Thames and its tributaries, from Cricklade (Gloucestershire) in the west to Minster-in-Sheppey (Kent) in the east.  Known primarily from historical sources, archaeological understanding of these riverine establishments is very poor, particularly so for the Middle Thames. 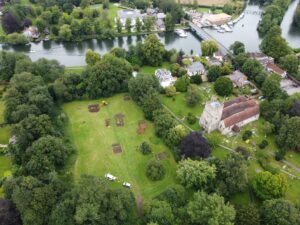 This project seeks to maximise the archaeological potential of Cookham to generate a step-change in our understanding of Anglo-Saxon monasticism in the Thames corridor both on its own terms and as a prism for addressing research agendas of international significance.  It is driven by the following research questions:

For a copy of the interim report on the inaugural (August 2021) excavation click here.

For a copy of Paul Blinkhorn’s specialist report on the Anglo-Saxon pottery from the 2021 excavation click here.

Watch a TimeTeam interview of the Cookham excavations here.