The monumental castles of south-western Europe are spectacular foci for public understandings of the historical past, a past that is typically defined by a narrative of polarised cultural struggles linked to the construction of national identities. They are often situated in dramatic landscapes, several of which have been designated as national parks and UNESCO geoparks. Whilst both castles and landscapes attract visitors, they are often disconnected from each other in the minds of visitors. In south-western Europe, many of these landscapes functioned at a crucial point in the process of state formation as frontiers – regions that straddled political borders.

The frontier societies of medieval south-western Europe were created by periods of conflict and coexistence defined, above all, by religious differences – principally between Christians and Muslims – but also between different groups of Christians. Jewish communities were also found on both sides of the frontier. As a result these were multicultural spaces, characterised by both mobility and fixity, disrupting any attempts at cultural homogenisation which accompanied regime changes following military conquests and territorial annexations. One of the ways in which conquering regimes consolidated their control was through the symbolic encoding of space; particularly the construction of imposing monuments representing authority – castles. They were the residences of families who were nominally responsible for the security of the borderlands, who were expected to promote the ideology of the new regime by enforcing law and order, as well as religious norms, and to exploit the natural resources of the territories under their control.

The Iberian Middle Ages are marked by a series of conquests which saw the reorganisation of Visigothic kingdoms into Islamic polities, which, in turn, were followed by a series of military campaigns led by Christian kings and magnates with the explicit aim of annexing territory. This process lasted until the end of the 15th century. The framing of many of these Iberian military campaigns as crusades – penitential wars authorised by the papacy – and the conversion of the most important mosques into cathedrals also exemplified this as an ideological conquest, as an ongoing holy war. Castles which functioned as frontier authorities are emblematic of the military conquests which have been merged into one lengthy, unrelenting Reconquista; a term popularised in mid-20th century historiography with the aim of promoting a nationalist agenda of unification. Following this narrative, the process of unification was the direct result of a “reconquest” of Christian Visigothic territories that had been lost to North African Islamic forces. This was completed in Portugal in 1249 with the capture of Faro, and in Spain in 1492 with the annexation of Granada. Although many Iberian scholars have rejected the term Reconquista in favour of regional “conquests”, the term still has international currency. Its main effect is to present an essentialist dichotomy between Christianity and Islam as driving the emergence of modern Iberian societies. This polarised cultural struggle has also been invoked by several commentators in the public domain in reaction to recent migration into the EU.

However, the situation was far more complex, and frontiers not only existed between nominally opposed Christian and Muslim states, but between those sharing the same world-views. Within Iberia, these were created between rival Islamic and Christian territories. To the north, the Pyrenees, which had formed a frontier between Carolingian and Islamic polities in the 8th century, the so-called “Spanish March”, saw the development of distinct Occitan lordships which were annexed by the Kingdom of France after a brutal crusade in the early decades of the 13th century. In 1258, the mountains became a new frontier between France and Aragon. From an archaeological perspective, the imposition of French authority can be seen in the rebuilding and expansion of frontier castles, whilst comparatively little attention has been paid to how this affected communities, beyond the popular narratives of the suppression of Occitan heresy, a movement later referred to as “Catharism”. In this respect, we have chosen to use the term “(Re)Conquest” to signify that we are both engaging with and critiquing the modern construct of the Reconquista, within the broader context of medieval frontier societies in south-western Europe.

Our project, funded by the AHRC (Arts and Humanities Research Council, from 2018-2022) aims to provide the first integrated, comparative study of frontiers in south-western Europe, with a focus on Spain and Pyrenean France. Drawing on a diverse range of case studies, we will focus on four key research questions:

1. What impact did the designation and declassification of a frontier have on the conquered population? How is this reflected in long-term changes in settlement and social organisation?
2. What impact did the designation of a frontier have on environmental exploitation? Is there a correlation between conquest and intensified exploitation? Did topography predetermine the location of frontiers?
3. How permeable were the frontiers of opposing societies? Did people, animals and ideas cross them?
4. How resilient were frontier societies following conquests and the imposition of new regimes? How autonomous were they and to what extent were these hybridised societies?

Frontiers are regions of varying temporality, and we will adopt a long-term perspective essential for contextualising the impact of multiple periods of conquest. By incorporating a range of archaeological, environmental and historical data, we will investigate changes in settlements, religious, commercial and political centres alongside environmental changes, assessing whether territorial reorganisation resulted in intensified resource exploitation, or to what extent earlier trends continued and can be linked to established practices and worldviews. Taking our inspiration from the UNESCO Geoparks programme which aims to “explore, develop and celebrate the links between that geological heritage and all other aspects of the area’s natural, cultural and intangible heritages”, we hope to bridge the gap between scholarship and public understanding of these iconic monuments within the context of their cultural landscapes. Our project will conclude with a public conference and photography exhibition that will be launched at the Museum of the Order of St. John in Clerkenwell, London, before relocating to venues in France and Spain. We are also collaborating with other research projects which are focusing on various aspects of medieval cultural landscapes in SW Europe, in particular the “Power and Rural Communities in the Nasrid Kingdom” project directed by Alberto García Porras and Adela Fábregas (University of Granada).

The frontier at Zafra 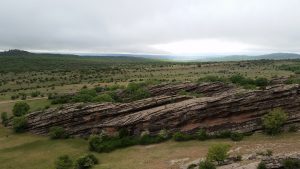