In the run-up to the 26th United Nations Climate Change Conference of the Parties (COP26) in Glasgow in November 2021, UKRI is holding a series of online events to showcase locally led research on adaptation and resilience. Grady Walker was invited to speak at the East Africa themed event about HyCRISTAL—a large project focusing on improving knowledge of East African climate change and its impacts. Here he reflects on what he learned. 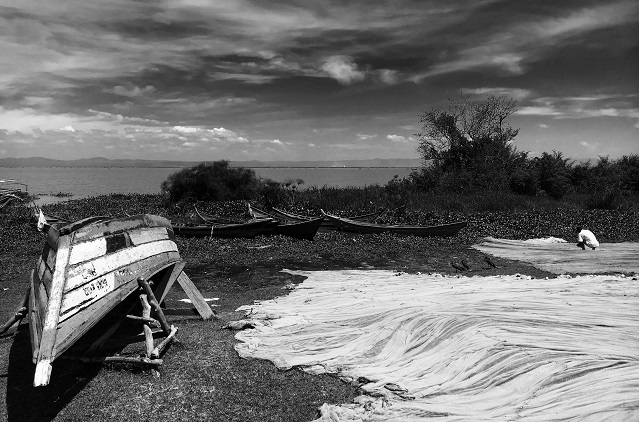 Presenters at the event were asked to reflect on some key themes related to climate change adaptation. Specifically, I addressed how these themes impacted our HyCRISTAL work with farmers and fishers in Mukono, Uganda, which is being led by the Walker Institute here at the University of Reading. The question that stood out to me was: What examples are there of transformative adaptation research enabling action through addressing social justice, capacity building and governance?

My research background is in critical pedagogy, a theory and practical application of education pioneered by scholars like the Brazilian, Paulo Freire, where the concept of ‘social justice’ features prominently, driving action-research investigations and activities. Unlike the positivism of legal justice, Freire argued that social justice relies on subjectivity, and can only be achieved by people who have emerged as protagonists in their own stories. Social justice is not something that can be ‘delivered’ by outsiders. This is the essence of many post-colonial critiques of justice that might be achieved through international development assistance. These critiques assert that the delivery of aid using the same pathways that were carved out by centuries of extraction, only in reverse, is simply an extension of hegemony by the Global North.

When I learned UKRI wanted speakers to address examples of transformative adaptation research through a social justice framework, I reacted with both scepticism and curiosity. My scepticism was based on my experience working on large donor-driven projects and familiarity with their facility at capturing the language of the moment and pressing it into the service of their own agendas. I was curious, however, to discover how a forum typically dominated by researchers from the natural sciences would engage with issues like social justice, and to hear the perspectives of colleagues from East Africa who were participating in the session.

In January of this year UNEP released the Adaptation Gap Report 2020, which concluded that despite advances in planning, ‘huge gaps remain in finance for developing countries and bringing adaptation projects to the stage where they bring real protection against climate impacts such as droughts, floods and sea-level rise’. The report is a review of the progress of global climate change adaptation, planning, and implementation. The term ‘justice’ appears twice in its 100 pages. To be fair to the report’s authors, this reflects the lamentable fact that justice is not explicitly addressed in national-level climate change adaptation plans. Additionally, many of the adaptation plans and projects they review include gender assessments and have gender-related outputs, which can have transformative consequences. This is similar to the current emphasis on Nature-based Solutions, a framework that leverages the power of nature for both mitigation and adaption, based on strong principles ensuring engagement with local communities and Indigenous Peoples.

Likewise, justice does not feature in the presidency programme for COP26, which is disappointing when we consider the extent to which the concept of climate justice has established itself in mainstream climate change discourse. Some might argue that, like the Adaptation Gap Report, justice is implicitly addressed in other programme themes, such as gender, loss and damage, and perhaps nature. But the conceptualisation of adaptation as largely technical solutions, driven by science and innovation, persists.

The limitation with this approach is that it identifies climate change as a problem that must be solved, not as the outcome of an overarching historical reality composed of economic, political, and social arrangements that have driven the natural environment, and society, to the precipice. Taking a systemic view enables us to recognise that the climate emergency, the destruction of our environment, the crisis of global inequity, and the endurance of social injustice are all interconnected.

This very question was highlighted by one of the other panelists, Professor Shuaib Lwasa from the Global Center on Adaptation. Can we truly have social justice in adaptation without widescale systemic change? In my presentation I argued that climate change adaptation projects must include a justice framework from the outset to grapple with these and other difficult questions. The science is neutral; its application in context determines impact. For example, when scientists project that a sub-region in East Africa will see certain climate impacts, who has greater capacity to use that information and adapt: family farmers or the big agri-businesses that aggressively acquire lands from smallholders? Climate change adaptation must consider just and fair outcomes, so that the conditions that have led to vulnerability are not simply reproduced on the other side of the adaptations.

One-time Reading resident Oscar Wilde, writing about philanthropy over a century ago, observed that one hand often tries to solve the problems created by the other hand. This paradox can be applied to modern climate change adaptation and mitigation efforts, and has not gone unnoticed by today’s generation of activists, with Greta Thunberg recently tweeting about the irony of the EU discussing its climate targets at an event presented by Shell. And I wonder how to avoid climate change adaptation simply being the left hand repairing the damage that the right hand has created, if it fails to embrace a vision of the future that includes a complete overhaul of the economic and political systems that brought us to the present crisis. With every passing summer we can repeat Fredric Jameson’s well-known quip with more sincerity: ‘It’s easier to imagine the end of the world than it is to imagine the end of capitalism’.

This attitude is reflected in the frustration expressed by many that our institutions are not doing more. There is almost universal consensus that the global response to the climate emergency is woefully insufficient. Only once we acknowledge that our national and international institutions are not doing more because they are simply unable to, and that the current system is profoundly incapable of reforming itself, can we undertake the daunting challenge of concentrating our collective efforts on alternative ways forward, placing social justice at the centre, rather than as an ambiguous biproduct of a system caught in a negative spiral, perpetually searching for ways to adapt to itself.

Grady Walker is a Senior Research Fellow at the Walker Institute.