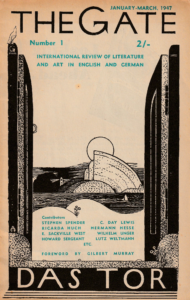 This research seminar is free and open to all. Join us in person in the Edith Morley Building, Room G74. To join via Zoom, register here: https://www.eventbrite.co.uk/e/428120508967

In this project we study a small constellation of literary and cultural magazines from three countries and language areas – Britain, France and Germany – in order to consider how, through translation, they explore and construct notions of European identity in the period following from the end of World War Two to the mid-1960s. Rapid shifts towards decolonisation, the Americanisation of European culture, the rise of anti-militarism and the strategic and ideological conflicts instigated by the Cold War all stimulated an ongoing reassessment of what the European idea stood for and whether or how it might be achieved. Using the notion of periodicals as ‘European spaces’, the project addresses how periodical culture in Britain, France, and Germany used translation to reconfigure a vision for Europe after the catastrophe of World War Two. As The Gate/Das Tor declared in 1947, art, music and literature were ‘not the property of one nation alone’ and that ‘a deeper understanding of our cultural ties with Europe is a surer way to international friendship than political treaties’. But what exactly was the significance of the translation of works of poetry, fiction, criticism, and non-fiction in this period? How did translated texts operate as vehicles for the forging of new European identities? And how did the crossing of linguistic boundaries produce alliances across national borders?