When rain falls, some or all of it enters into or “infiltrates” the soil.   The rain that does not infiltrate becomes surface water that can cause flooding, so it is of great interest to people making flood predictions.   Predicting how much rainfall infiltrates is a problem that has historically presented hydrologists with much difficulty.  Despite the fact that the so-called Richards’ equation was first posited by Richardson in 1922, identification of a general, accurate, and reliable solution has evaded hydrologists for generations- until now. 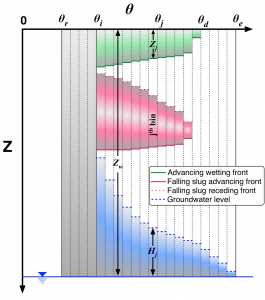 Because of the many computational difficulties associated with reliable and accurate solution of Richards’ equation, hydrologists have developed approximate solutions of various complexity, none of which approach the capabilities of the Richards’ solution except in the simplest of cases.  Developed together with then Ph.D. student Cary Talbot, the finite moisture-content solution methodology was published in 2008, as another approximation lacking deep theoretical justification.  However, in 2014 after some new theoretical work with his research group, Prof. Ogden set up a laboratory column experiment to collect data to validate a revised finite moisture-content solution to simulate groundwater table dynamic effects on the water content of the unsaturated zone.  The new solution methodology performed as well or by some measures, better than numerical solution of Richards’ equation, and led to identification of the Soil Moisture Velocity Equation (SMVE), a completely new formulation that is equivalent to Richards’ equation but with velocity as the dependent variable.  The SMVE consists of two parts.  The first “advection-like” part accounts for the flow associated with gravity and the integrated (scalar) capillarity of the wetting front, and can be solved as an ordinary differential equation using the finite moisture-content discretization.   The second “diffusion-like” part accounts for flows due to the shape of the wetting front, and is negligibly small in all cases tested thus far.  The finite moisture-content solution of the advection-like term is a fast general, accurate, and reliable vadose zone flow calculation method, representing a technological first.