The performance of the Silent Movie Prologues from Brazil and the screening of Go West (Keaton, 1925) on Friday 7 December were cancelled because of the campus closure.

We’re pleased to announce that the performance and screening are rescheduled for Monday 10th December and we are waiving admission (and refunding those who had booked tickets for Friday).

We look forward to seeing you at the Minghella Studios. Doors open at 7pm. 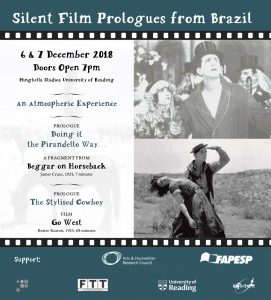 they were designed to accompany: Buster Keaton’s wonderful comedy feature Go West (US, 1925) and the surviving fragment of another extraordinary 1920s film, Beggar on Horseback (US, 1925).

The two prologues, “The Stylised Cowboy” and “Doing it the Pirandello Way…”, were originally created to accompany the presentation of the films in Rio de Janeiro, in 1926. They combine popular theatrical traditions, an interest in early 20th Century modernism and a carnivalesque approach to Hollywood movies. As part of the AHRC/FAPESP-funded IntermIdia project, they are restaged in the Minghella Studios by students on the part 3 module Ensemble Practice, who have also created other atmospheric experiences to set the scene for the evening. Doors open at 7pm.

You can read more about the project here.