This event is free and open to all. Join us in the Edith Morley Building, Room G74, to be followed by drinks at Park House. To register for the Zoom link, click here: https://www.eventbrite.co.uk/e/424176642757 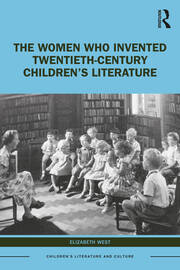 Publishing for children between 1930 and 1960 has been denigrated as a relatively fallow period for creativity and quality, certainly in comparison with the ‘golden ages’ of children’s literature that preceded and succeeded it. This book questions this perception by using archival evidence to argue that the work of what was predominantly a female group of editors, illustrators, authors and librarians (collectively referred to as bookwomen) resulted in many titles which are still considered as ‘classics’ today. The bookwomen reframed ideas about how children’s publishing should be approached and valued and, in doing so, laid the foundations for a subsequent generation of children’s authors and publishers who were to achieve far greater prominence. The key to the success of the bookwomen was their willingness to experiment, the strength of their relationships, and their comprehensive understanding of the book production process. By focusing on a selection of women working across all aspects of the book production process, this book demonstrates that, both individually and collectively, women capitalised on their position as ‘other’ to the existing male institutions.

The event will be followed by drinks at Park House.