Under the Shadow film screening 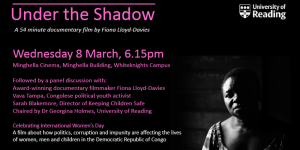 The School of Politics, Economics and International Relations would like to invite you to the launch of

A 54 minute documentary by Fiona Lloyd-Davies

Followed by a discussion panel with:

One woman leads Congo’s rape survivors to find healing, independence and justice through working together in the field.  But can these women escape the shadow cast by this threat of sexual violence and will the spectre of justice bring hope and resolution? We hear extraordinary confessions from soldiers who have raped women and then witness inside the court room as others are tried for this crime, the ultimate weapon of war. This immersive, observational film was made over four years, taking the viewer inside a woman’s ultimate nightmare, to show how the human spirit is impossible to defeat.