The effect of clouds on global warming, a ‘light switch molecule’ to diagnose disease and the entanglement of malaria with colonialism were among the research topics that have won University of Reading academics prizes. 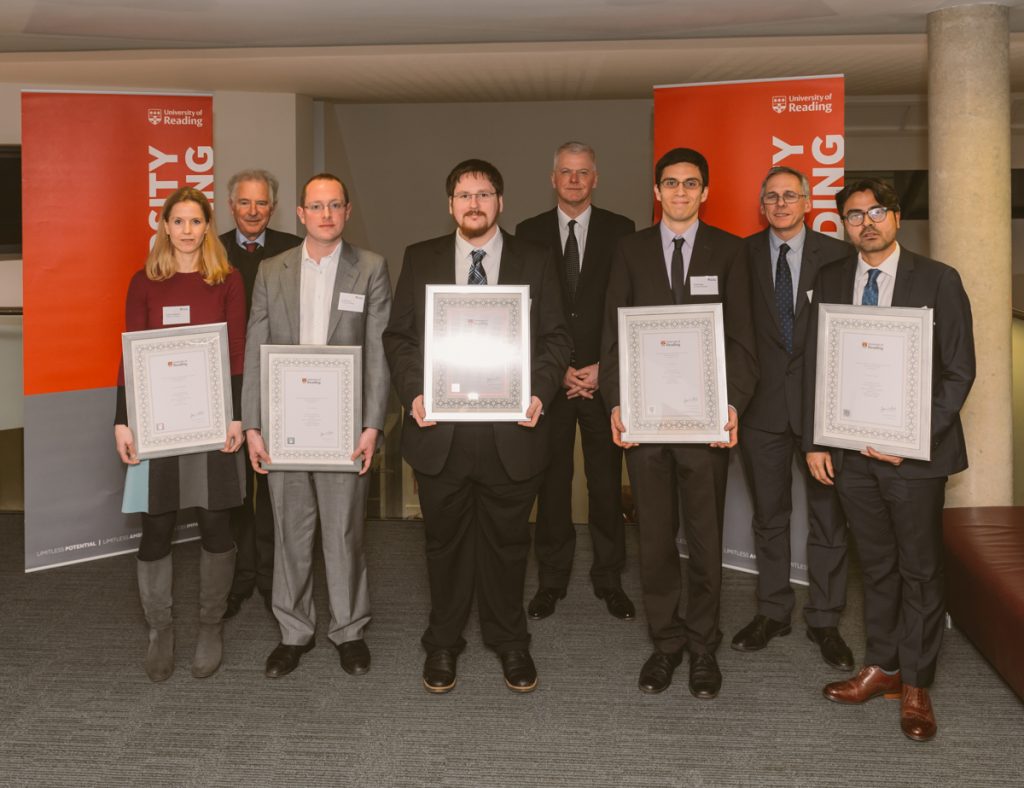 The five academics, one from each research theme, were honoured with a Research Output Prize for Early Career Researchers at University Court, the showcase annual event for the University community, on 19 March.

Professor Steve Mithen, Deputy Vice-Chancellor, said: “This year’s winners were drawn from a very strong field. All have made significant academic achievements at an early stage in their careers and I warmly congratulate them. Their achievements are testament not only to their talent and hard work, but also to the University of Reading as a place where research excellence is nurtured and supported.”

Dr Ariane Kehlbacher, from Agri-Food Economics and Social Science, whose research showed that taxing foods based on the greenhouse gas emissions they produce would hit poorest households the hardest. That is because lower income households spend a larger share of their food budget on emission-intensive foods – such as meat – than their wealthier counterparts. Less well-off households also tend to buy cheaper products which means they would see a greater price hike on their weekly shop if emissions-based food taxes were to be introduced.

The judges described the paper as “a rigorous and methodologically novel analysis on a very topical subject relating to ‘polluter pays’ taxation policy” and “a very policy-relevant output”.

Dr Tim Vlandas, from Politics and International Relations, for an article exploring the idea that ageing leads to lower inflation. When societies age, the political power of ‘grey voters’ increases which puts pressure on political parties to pursue policies that lead to lower inflation. Countries with a larger share of elderly people therefore end to have lower inflation than those with younger populations, his paper argues. Judges were impressed by the “originality and significance” of the research question and praised the “impressive scope of the empirical research.”

Dr Paulo Ceppi, from Meteorology, for a paper which explains why global warming is accelerating as time passes. Paulo’s research has shown that as rising CO2 levels warm the atmosphere, changes to the surface temperature of the sea are having a knock-on effect on the cloud cover over a large area of the Pacific Ocean, allowing more sunlight to be absorbed. The relationship between sea surface temperature and cloudiness is similar in both real-life observations and in models of climate change. This lends further confidence to models whose projections are used by the Intergovernmental Panel on Global Warming. Judges described the findings as “world leading” and “of international significance in climate science.”

Pharmacy researcher Dr James Hall has discovered how a light-emitting molecule can bind to DNA in five different ways, each with a different brightness, like a ‘dimmer switch’. This is a critical step towards developing molecules that can detect different DNA structures – such as those linked to different diseases. Deemed to offer “significant applications for future diagnostics” the judging panel also noted that the article had already been cited 10 times, despite only having been published recently, and was therefore already making an impact in the field.

Dr Rohan Deb Roy, from History, for ‘Malarial Subjects’ – a book exploring malaria within the context of British imperial rule of India and the entanglement of colonialism with mosquitoes, quinine and cinchona plants. Judged by the panel as “a work of exceptional originality and significance” the book explores connections between humans and non-humans, and science, medicine and empire.

More details on each of the research projects, including video of each of the winners will be published over the next few weeks on this blog.