Reading is known as one of the world’s leading centres for the study of food and health. We have outstanding facilities and expertise to study the whole food chain – from climate, weather, soil, farming, food processing, nutrition, to human health and cognition.

So it’s no surprise that TV producers beat a regular path to our door when they want to see the latest scientific research. And none does so quite as innovatively and beautifully demonstrated as BBC Two’s latest science documentary, The Secrets of Your Food

The programme, which has its final episode this week (Friday 10 March) at 9pm on BBC Two, shows the effects food has on our taste buds, brains, and bodies. Alongside the widespread locations and elegant CGI are, of course,  frequent shots of scientific demonstrations carried out at the University of Reading in the Department of Food and Nutritional Science, and in the Department of Chemistry.

In the first episode, We Are What We Eat, I helped presenter Michael Mosley to separate the various components of breast milk in our Food Pilot Plant; investigate how the proteins in egg unfold and denature at different temperatures to create the perfectly cooked egg; demonstrate the production of gas by yeast; and compare fats from different food.

I also worked alongside James Wong to look at the explosive energy in rice, and how to extract calcium phosphate from milk to show you what your bones are made of.

Last Friday’s episode, A Matter of Taste, focused on the five basic tastes: salty, sweet, bitter, sour and umami. I helped Michael look at these basic tastes as pure compounds in comparison with a Thai stir-fry, and as an extract of concentrated amino acids high in glutamate from tomatoes. Glutamate tastes of umami – the so-called ‘fifth taste’. Umami is described as meaty, brothy, savoury, and translates from its original Japanese as ‘pleasant savoury taste’. 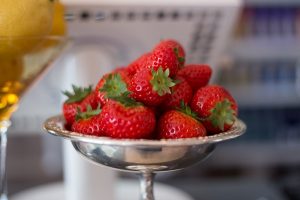 We used a refractometer to measure sugar in juice squeezed directly from the berries (watch clip here). The refractometer measured how much the light bent as it passed through the sugary liquid. The more sugar present, the more the light bent. The refracted light then gave a reading of 13 for blueberries, and 8 for strawberries. These value are actually known as Brix values, corresponding to 13 g of sucrose per 100 ml of blueberry juice and 8 g of sucrose per 100 ml of strawberry juice. As the fruit juices aren’t purely sugar, these values are only a rough guideline, but accurate enough to compare the two berries.

The reason strawberries seem to taste so much sweeter is nothing to do with taste, but actually because of smell. A synergistic relationship exists between sweetness and certain aroma compounds. Just like the smell of vanilla can make you think of the sweetness of cakes and desserts, certain compounds in strawberry, like furaneol, can travel to your smell receptors retronasally (to your nose via the back of your throat) and trick you into thinking you can taste more sweetness. The ‘taste’ of strawberry is not as simple as it seems.

We also helped Michael to smell a curry (watch clip here) – not in the usual way, but using a technique called gas-chromatography olfactometry. In this technique, solvent is used to extract the aroma compounds from the curry, which are then inserted into a long tube called a column. The compounds start out as a mixture, but as they pass through the column, some move faster than others, depending how easily they stick to the coating on the inside of the column. By the end of the column, the compounds are split up, so they are no longer all mixed together.

The aroma compounds then go through a tube which has a nose (in this case belonging to Michael) at the end of it. He can then sniff and describe each compound as it comes through to him.

A meal could have hundreds, if not thousands of different aroma compounds, so when Michael smells them all together, he instantly recognises a chicken korma. However, when the compounds are smelled separately, they smell of lots of different things, such as: meaty, onion, garlic, spicy, potato and milky, as you might expect for a curry.

Some smells are more unexpected, which Michael described as “wet mackintosh” and “damp basement”, other smells identified from the curry were: rubbery, pigsty, sweaty, plastic, hot metal, and rose. Although they may seem strange, without these aromas, the curry smell would seem incomplete, or even unrecognisable.

This week’s episode, Food on the Brain, will look at how food affects the brain, and will be the third and final episode in the series.

Make sure you catch it – and some more examples of food science techniques at the University of Reading – on Friday 10 March on BBC2 at 9pm.

WATCH: The Secrets of Your Food trailer