Oli Wilson, a PhD student and Graduate Teaching Assistant in the School of Archaeology, Geography and Environmental Sciences, is exploring Brazil’s unique and endangered Araucaria forests – how they were shaped in the past by humans and climate change, and how likely they are to survive in the future.

Recently, Oli won an online competition, ‘I’m A Scientist: Get Me Out Of Here!’. Here, Oli explains how this outreach activity is helping to inspire a new generation of scientists, and why he’ll be spending his winnings on an innovative resource for public engagement.

I like to think I can find some kind of answer to most scientific questions I’m asked, but from time to time I find myself utterly stumped – and, for a fortnight in early November, it started happening with almost embarrassing regularity:

Why can’t we shapeshift? (We’re not cuttlefish.) What would happen if a car travelling at light speed turned on its headlights? (Terrible things, probably.) How would you explain relativity to a ten-year-old? (I wouldn’t; I couldn’t!) Why do aeroplanes stay up? (I believe it to be a combination of physics and magic.)

My brain’s workout came courtesy of an online outreach competition called ‘I’m A Scientist: Get Me Out Of Here!’  It’s as reality TV-like as its name suggests – school students ask scientists questions and vote for their favourites, with scientists getting evicted as the competition progresses.

One of the competition’s most exacting challenges comes in the application phase: describing your work using just one sentence and a 13-year-old’s language. I realised ‘the palaeoecology and climate resilience of Brazil’s Araucaria forests’ probably wouldn’t cut it, so eventually I went with ‘Using fossil pollen time machines and computer models to work out the past and future of a threatened forest in Brazil,’ an idea I also used in this summer’s .

First hurdle cleared, I found myself in a general science zone alongside five other, brilliant, scientists. We shared a dozen finger-achingly frenetic live chats and 300+ questions, and I learned a huge amount – from Edward’s remote-controlled mice and Kerrianne’s revelation that ‘the human body literally glitters’, to a student’s question about the environmental impact of fireworks which unexpectedly challenged my pre-existing opinions.

At the end of the fortnight, having dodged three evictions, I found myself watching a message board that, word-by-word and agonisingly slowly, revealed who’d won the £500 prize… 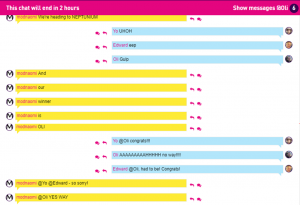 Now I’ve got over my shock at winning, I’m planning to use the money to 3D-print accurate, larger-than-life models of pollen grains. Much of my research involves looking at pollen that’s spent centuries stored in bogs (hence ‘fossil pollen time machines’), but this can be difficult to translate into accessible outreach activities. These models will not only show off pollen grains’ microscopic, intricate designs, but also help students understand what we do by making and interpreting their own pollen time machines. I can’t wait to get started!

If you enjoy communicating your science to others, want to help debunk stereotypes of scientists, and fancy inspiring the next generation, I wholeheartedly recommend you sign up for I’m A Scientist – registration for the next event in March 2018 is already open.

'I honestly didn't think plants were interesting until 10 minutes ago'