Depending on who you listen to, artificial intelligence may either free us from monotonous labour and unleash huge productivity gains, or create a dystopia of mass unemployment and automated oppression. In the case of farming, some researchers, business people and politicians think the effects of AI and other advanced technologies are so great they are spurring a “fourth agricultural revolution”.

Given the potentially transformative effects of upcoming technology on farming – positive and negative – it’s vital that we pause and reflect before the revolution takes hold. It must work for everyone, whether it be farmers (regardless of their size or enterprise), landowners, farm workers, rural communities or the wider public. Yet, in a recently published study led by the researcher Hannah Barrett, we found that policymakers and the media and policymakers are framing the fourth agricultural revolution as overwhelmingly positive, without giving much focus to the potential negative consequences. 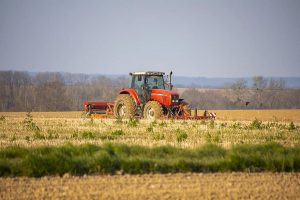 The first agricultural revolution occurred when humans started farming around 12,000 years ago. The second was the reorganisation of farmland from the 17th century onwards that followed the end of feudalism in Europe. And the third (also known as the green revolution) was the introduction of chemical fertilisers, pesticides and new high-yield crop breeds alongside heavy machinery in the 1950s and 1960s.

The fourth agricultural revolution, much like the fourth industrial revolution, refers to the anticipated changes from new technologies, particularly the use of AI to make smarter planning decisions and power autonomous robots. Such intelligent machines could be used for growing and picking crops, weeding, milking livestock and distributing agrochemicals via drone. Other farming-specific technologies include new types of gene editing to develop higher yielding, disease-resistant crops; vertical farms; and synthetic lab-grown meat.

These technologies are attracting huge amounts of funding and investment in the quest to boost food production while minimising further environmental degradation. This might, in part, be related to positive media coverage. Our research found that UK coverage of new farming technologies tends to be optimistic, portraying them as key to solving farming challenges.

However, many previous agricultural technologies were also greeted with similar enthusiasm before leading to controversy later on, such as with the first genetically modified crops and chemicals such as the now-banned pesticide DDT. Given wider controversies surrounding emergent technologies like nanotechnology and driverless cars, unchecked or blind techno-optimism is unwise.

We mustn’t assume that all of these new farming technologies will be adopted without overcoming certain barriers. Precedent tells us that benefits are unlikely to be spread evenly across society and that some people will lose out. We need to understand who might lose and what we can do about it, and ask wider questions such as whether new technologies will actually deliver as promised.

Robotic milking of cows provides a good example. In our research, a farmer told us that using robots had improved his work-life balance and allowed a disabled farm worker to avoid dextrous tasks on the farm. But they had also created a “different kind of stress” due to the resulting information overload and the perception that the farmer needed to be monitoring data 24/7.

The National Farmers’ Union (NFU) argues that new technologies could attract younger, more technically skilled entrants to an ageing workforce. Such breakthroughs could enable a wider range of people to engage in farming by eliminating the back-breaking stereotypes through greater use of machinery.

But existing farm workers at risk of being replaced by a machine or whose skills are unsuited to a new style of farming will inevitably be less excited by the prospect of change. And they may not enjoy being forced to spend less time working outside, becoming increasingly reliant on machines instead of their own knowledge.

There are also potential power inequalities in this new revolution. Our research found that some farmers were optimistic about a high-tech future. But others wondered whether those with less capital, poor broadband availability and IT skills, and access to advice on how to use the technology would be able to benefit.

History suggests technology companies and larger farm businesses are often the winners of this kind of change, and benefits don’t always trickle down to smaller family farms. In the context of the fourth agricultural revolution, this could mean farmers not owning or being able to fully access the data gathered on their farms by new technologies. Or reliance on companies to maintain increasingly important and complex equipment.

The controversy surrounding GM crops (which are created by inserting DNA from other organisms) provides a frank reminder that there is no guarantee that new technologies will be embraced by the public. A similar backlash could occur if the public perceive gene editing (which instead involves making small, controlled changes to a living organism’s DNA) as tantamount to GM. Proponents of wearable technology for livestock claim they improve welfare, but the public might see the use of such devices as treating animals like machines.

Instead of blind optimism, we need to identify where benefits and disadvantages of new agricultural technology will occur and for whom. This process must include a wide range of people to help create society-wide responsible visions for the future of farming.

The NFU has said the fourth agricultural revolution is “exciting – as well as a bit scary … but then the two often go together”. It is time to discuss the scary aspects with the same vigour as the exciting part.

David Rose is the Elizabeth Creak Associate Professor of Agricultural Innovation and Extension in the Department of Applied Economics and Marketing.